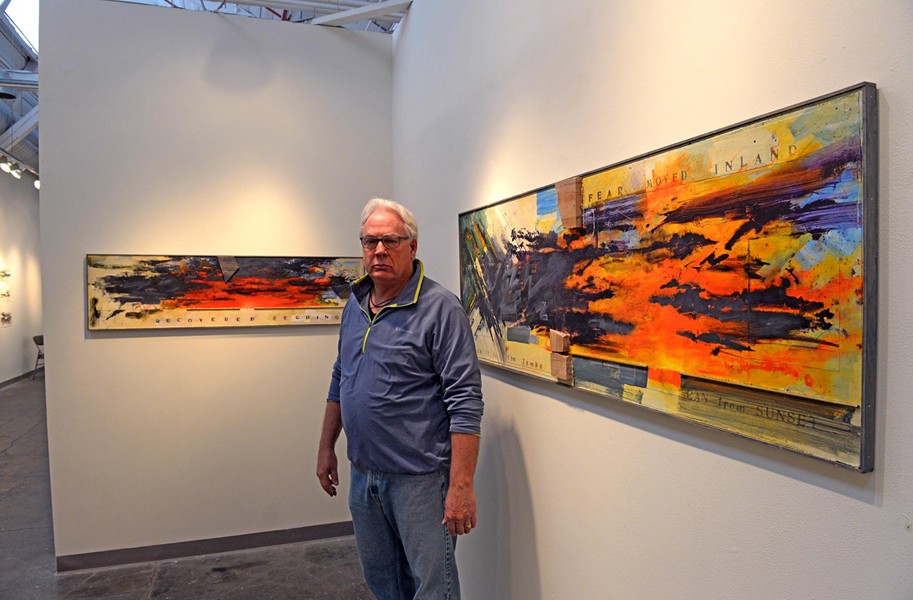 Former Richmond artist Frank Cole (shown here at Artspace) and his family have settled in Rockville, Maryland. But he says he wanted to show his paintings “where my artistic friends are.”

The galleries’ walls may be icebox white, with blue skies visible beyond industrial skylights, but apocalyptic is the only word to describe the unsettling sense of things in some 30 canvases and works on paper by Frank Cole, hanging concurrently at Manchester’s Artspace and at the Hill Gallery and Studio in the Fan.

Through agitated brush strokes and a tonal palette ranging from deepest black to shades tropically colorful, Cole, a Maryland-based artist with deep connections to this city, broadcasts that he isn’t optimistic about the fate of the earth. Where Al Gore uses PowerPoint to drive home cautionary points, a visual talent like Cole uses color, mastery of the paint brush and exquisitely drawn lines to broadcast a message of environmental urgency.

No, Cole’s horizontal canvases don’t include imagery of debris and body parts strewn across charred landscapes. He pulls back a good distance to capture panoramic views of mostly imaginary disaster zones that border on elegant: Horizontal landscapes threatened with dark and jagged clouds are spectacularly illuminated by fiery blasts of orange or blue heat.

This exhibition may come as a jolt to those who know Cole’s work from some 25 years ago when he last showed here. Then, his canvases were just as expertly and beautifully painted — with strongly rendered lines and assured brushwork — but he was working with fruit imagery, cantaloupes and oranges. Decidedly not apocalyptic subject matter, those pieces were simultaneously classical and personally introspective. A large, highly public and memorable Cole installation was a painted mural that once adorned the upper walls of Verbena, a former stylish and excellent restaurant at Floyd Avenue and Robinson Street.

But that was then.

The Loudoun County native grew up on a dairy farm and graduated from Virginia Commonwealth University. In the spring of 1989, after working successfully for a decade in his Richmond studio on West Cary Street, he left the comfort zone of friends. He said goodbye to such distinguished mentors as Richmond artists Myron Helgott and David Freed, who some years before had bolstered his confidence to enroll in Yale for graduate studies, an experience that wasn’t a happy one, Cole says: “I went from top dog down here to a bottom dog up there.”

Prompting his move to Florida in 1989 was the death of his father and the act of quitting smoking. “I moved to Sarasota for a change of scenery,” he says, sitting in Artspace amid highly expressionistic paintings of crashing surf and Wagnerian-like skies. “I wanted to see the sky and the water. I missed that so much.”

But the muses play tricks on us. Cole’s original chosen imagery of well-drafted maps outlining the Florida peninsula didn’t depict a sunny Shangri-La. Instead, he began to manipulate the maps, adding information and evidence of ecological things that had, or could happen. He drew some 100 deceptively simple, innocuous maps. In one of them displayed here, Florida’s west coast has been extended into the Gulf of Mexico by a trapezoidal-shaped carbuncle. “Developers,” Cole says, starring drolly at the work.

But after years living in Sarasota, where he taught at Ringling School of Art, and after marrying and having a daughter, he and his family settled in Rockville, Maryland. He reconnected with landscape design and installation, work he’d enjoyed at various times throughout his life. But Richmond still had a pull on him, he says, and he wanted to show here again: “I wanted to do a show where my artistic friends are.”

As he inquired about possible venues he realized things had changed, including the deaths of a longtime patron, Walter Hooker, and his one-time gallerist, Beverly Reynolds. But Cole has changed too. His works aren’t alarmist in tone, but they are statements of fact. There probably wasn’t a time when the world was in turmoil, but his exhibition opened in a week when political events flared-up in Yemen, a New York Orthodox Jewish family of seven perished in a house fire and a commercial plane was crashed purposely into the Alps.

Cole’s work reminds us that sometimes the filter of an artistic vision is the only way we can face cold and unforgiving realities. S