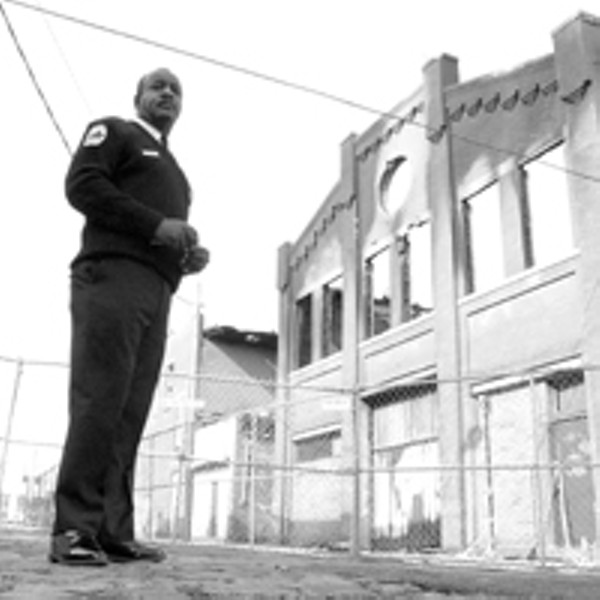 All told, more than 20 buildings and 20 vehicles were destroyed. But the fire could have been, probably should have been, much worse. With a fleet of 19 multipurpose fire engines equipped with ladders — called Quints — firefighters attacked the fire with a height advantage, knocking out smoldering embers from rooftops in Carver quickly and decisively.

Many more lives — one fatality was reported — could have been lost, Tunstall says. Style caught up with the chief last week at the fire department’s new headquarters at 550 E. Marshall St.

Style: Where were you when this happened and what was your initial reaction?

Tunstall: I was personally here in this building and had not intended to respond when I first heard the call come in. Especially when I got the initial report that it was a building under construction. I really felt like those officers and firefighters out there would put this fire out very quickly, and we would go about our day.

At what point did you go out to the scene?

When they called for additional units, which would be the second alarm, after hearing the reports of the battalion chief and hearing of the directions the fire [was] spreading. … Even then, when the second alarm went in, I did not immediately go get in my car and turn the red lights and sirens on, and head up in that direction. As I recall, I started bringing somewhat to closure what I was working on and said I was going to head in that direction since it was around lunchtime. … I still didn’t have the full scope of what they were dealing with.

Did the materials — the wood frame of the apartment building on Broad — play a major role in the fire?

I don’t know it was so much that. It’s the worst time they could have had the fire in the building under construction. It was exposed fully, before the Sheetrock and any masonry had been supplied to the outside. That’s the worst time for a fire to start.

It was the wind that made this so difficult?

That was one challenge in itself, because that’s what damaged the building across the street. … Then you had the embers going all they way over to Marshall and Clay [streets], as far away as Mechanicsville. That created a totally different challenge. That called for all the resources we had.

Is this the biggest fire that you’ve ever been involved in?

I would say the most challenging, not necessarily the largest. The challenge there was with so many fires starting at the same time, and in such a condensed area in the Carver neighborhood. And the way those embers were actually setting those fires off on various rooftops, it would be impossible for us to locate those embers until they started smoldering. … And we couldn’t do it by air with helicopters. The turbulence would create more of a problem from the air.

With all the news coverage, there were a lot of Monday morning quarterbacks. What do you find yourself telling people over and over again?

For the most part, I’ve heard nothing but praise. I can tell you if you follow these types of incidents in other cities … the whole community, especially with older homes, wood frame homes certainly, could have been a total loss. I’ve seen communities like in Oakland and in Philadelphia where the whole entire block of a neighborhood is leveled. … You talk about 20-some homes damaged, but we saved 100-some homes.

I think the challenge for the citizens, if you are on scene and your house is burning … Two minutes seems like two hours. … With that many operations going on at one time, the communications was extremely challenging. The correct decision to go defensively immediately I think contributed to saving a lot of houses.

Explain the difference between defense and offense?

Internal [offensive] and external [defensive] attacks. The officer has to make that decision, and he has very little time to make that correct decision. Are they going to do internal attack, or are they going to pull the firefighters back and use the large, massive screens and protect the exposures and write that particular building off?

Now obviously, once they realized what they were faced with at 933 West Broad, you want to get those firefighters out of there. But at each individual property you have to make that same decision. Say you have a three-story frame dwelling, heavy fire in two rooms on the second floor. You and I are the only two there. We make sure that no one is in the house, and then we just have to hit it with a massive screen on the outside because we are going to lose that battle with that particular house. So now we want to save those houses on the flank, on the left and on the right. That’s when you go into a defensive mode.

Is there anything the city could have done differently, in terms of building codes, etc.?

I don’t know. I’m not prepared right now to make that statement that this is what we should do in the future. I can tell you without this fire you are looking at a person who believes in and has a team already in place that’s going to look at changing our codes for sprinklers for residential property owners and upgrading the requirements for commercial buildings. For instance, in Prince George’s County, Maryland, they have an ordinance that all newly constructed property has to be sprinkled. And I believe in that. I believe that if you have smoke detector in your home, and your property is sprinkled, then the likelihood of you dying from an accidental fire will be tremendously reduced. One of the things I have asked the team to look at is how can we encourage existing property owners to do the same thing?

When you went home that night and talked to your wife, what was the first thing you talked about?

We were having a press conference with the media. While I was sitting there, the mayor was talking, I had an opportunity to look to my right. And I saw a monitor from a TV screen. It was the first time I had actually seen that. Because I came in from Leigh Street, then came up Clay and then Marshall. And then when I met with the media I was actually on Broad Street when most of the fire was actually knocked down. Visually, the other firefighters on Broad Street were my eyes.

So after I finished talking to the media, I looked, and one of the local stations had the monitor on, and they were actually showing the first ten minutes of the fire, from that view of Broad Street. And just for a moment when I had a chance to relax, I turned to the city manager and I said, “Did you see that monitor?” … I felt such pride in our firefighters. It was at that moment that I recognized how well those firefighters had performed, and the fact that they had saved that entire community and we didn’t have hundreds of deaths, and especially firefighter deaths.

When you see those photographs … somewhere underneath there is a fire truck and some firefighters. That was the first time I had seen the magnitude of flames. … And I remember saying to the city manager, “Do you realize what these guys have done here today? They actually saved this community.” And he turned and looked at the monitor, and it may have been the first time that he had looked at it also, and we just stood there and stared at each other for a moment. And I recall him saying, “Thank you.” To see it all unfold right there, it was so touching. S