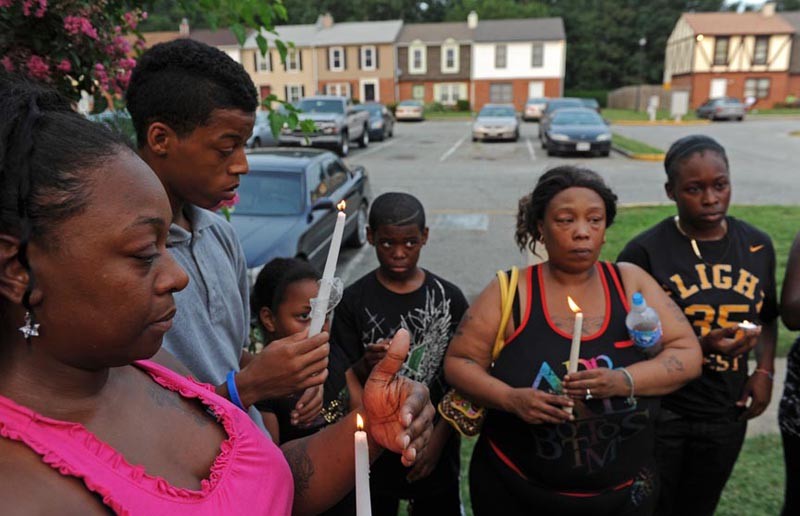 Spencer Ross didn’t have a home in the traditional sense. He was the family’s nomad, couch surfing for days at a time from his mother’s home to his aunt’s to the various apartments of his nine siblings and back again.

That was how, his cousins say, in a family as large as the extended Ross clan, he managed to be close with nearly everyone.

A dozen or so of them gathered July 20 at the home of Sheri Ross, his aunt, for a prayer vigil held in Ross’ honor. A large white bow hung on a rickety wooded fence in remembrance. It was in there in the backyard of her Henrico County apartment that he was shot to death. A spokesman for the Henrico police reports that Ross’ death has been ruled a suicide by the state medical examiner.

Days after his July 10 death, the realization that Ross is gone has barely begun to sink in. The prayer vigil was scheduled to begin at 7 p.m., but only a fraction of his family and friends attend. Most lingered at the funeral home following a viewing of the body. His mother, Von Robinson, never showed. She was too overcome, says Sandra Shine, Ross’ aunt.

Those who did attend had stories to tell. A short man who favored Black and Mild cigars, Ross had an outsized personality. He was 22, they say, and acting like it.

Spence to his proper friends, Joe (short for Jovon) to everyone else, friends and family remember him as cocky. The kind of cocky that took his shirt off at nightclubs and nonchalantly ripped up $20 bills to get attention. “He’d call you up afterward and say, ‘Cuz, we’re the life of the party,’” remembers cousin Jasmine Bland.

Other loved ones remember Ross as a charmer. “He was a con artist,” shares says Devona Robinson, affectionately. “He would con you out of your life if he could.”

Robinson is pregnant with her and Ross’ first child. On her head is a black baseball cap emblazoned with a picture of Ross glaring at the camera. On the T-shirt covering her belly is a similar photo.

A 2009 graduate of L.C. Bird High School in Chesterfield County, he’d most recently worked in the kitchen at Moe’s Southwest Grill. But he’d talked about wanting something different, Robinson says.

Underneath all that infuriating cockiness, he was a sweet young man dedicated to his family, Shine says. “Kids loved him,” Shine says. “They have since forever.”

Ross died just two months before he would get to meet his own child. They planned on raising it together, Robinson says. Now, Robinson’s pregnancy is a symbol, a remembrance of him. In addition, she’ll be getting a tattoo. “I’m going to get his name,” she says, pointing toward her neck.