The Center of Prosperity?

This shows an inverse relationship — wherever the city has sought to revive an area by these 1950s redevelopment practices, it has made it worse 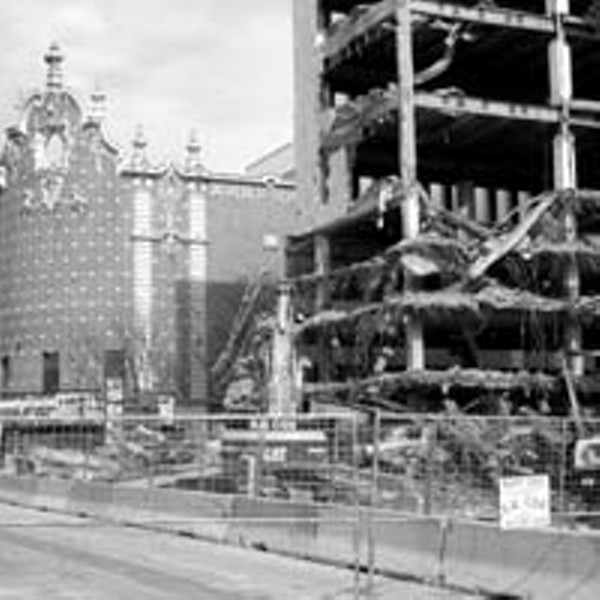 The back of an old 1930s postcard of the Hotel John Marshall reads that the hotel sits at Fifth and Franklin streets, the "Center of Prosperity" in downtown Richmond. Then, hundreds of stores clustered there to take care of a pedestrian scene worthy of Fifth Avenue. That can't be said about the area today.

While there is a hope of apartments at the John Marshall, and renovations sweep through the rest of Richmond, wags have dubbed Richmond's once most valuable corner Fallujah, owing to half-destroyed Thalhimers and Miller & Rhoads buildings and empty parking lots surrounding it. In the case of both of the shuttered department stores, they await, respectively, nonprofit and for-profit developers dependent on the government teat.

Unlike the damage done by al-Qaida bombers and U.S. missiles, this damage is entirely self-inflicted by Richmond's leadership class, coming at a time when rejuvenated cities across the state and country are refilling empty blocks with buildings, and even modest rotted frame buildings here are being revived. When Bette Midler came to Richmond last fall for a sellout concert at the Richmond Coliseum, she took an aside to talk about how special Richmond's architecture was (remarking on Main Street Station, I recall) and then admonishing us to fill in the empty parking lots with new buildings. Little did she know that those blocks were filled with excellent 19th- and early 20th-century buildings that only a few years ago were ripped down for surface parking lots at the request of City Council.

The death of downtown is often blamed on many things, and certainly malls and white flight have hurt Richmond's. But malls and white flight were more than 30 years ago. Today, I work in the handsome Dietz Press building at 109 E. Cary St., only six blocks away from the Center. My block has been almost 100 percent restored in the last 10 years with a mix of small business offices, apartments and restaurants. The streets are lined with on-street parking and surface parking in the back alley.

Contrast that to a recent walk to the former Center of Prosperity, where the only "business" I saw was a government-contract meter maid giving out parking tickets to the few folks who dared to stay a few more minutes than they were supposed to. Oh, and the workers adding in new signage and sidewalks for another "Extreme Makeover" in the reality show called "Endless Government Schemes for Downtown." At Reveal Time, it's Kafka, Richmond style. A canal where you don't have any private boats. A shuttered Carpenter Center. A Museum of the Confederacy asking an indigent hospital to move it across town. An empty Miller & Rhoads. A conventioneerless Convention Center. A train station without passengers.

If you want to blame anyone for the failure of the Center of Prosperity, look at city government and its Ceausescu mentality. The government is not just in city, state and federal buildings, but the tentacles of the organizations and schemes it funds — everyone from Richmond Renaissance to the Virginia BioTech Park, Metro Richmond Convention and Visitors Bureau, Richmond Redevelopment and Housing Authority, Richmond Riverfront Corp. and so on. After two decades of meddling, these groups have turned Richmond into a zone where there is virtually no useful retail at all.

It is hard to pinpoint exactly when the long socialist assault on downtown began, but I look to the 1960s with the Civic Center effort of City Hall, the Federal Building and Public Safety Building. This effort destroyed acres of small-scale buildings of private businesses, churches and residences and reduced on-street parking. After the Civic Center came the Richmond Coliseum. Then "Streetscapes" came with sidewalk widening, which removed on-street parking from Grace Street, which promptly died. Then came Project One, which moved both the Trailways and Greyhound stations to Boulevard and took acres more for the once-bankrupt Marriott, the subsidized Project One office building and the ill-fated 6th Street Marketplace.

With the expansion of MCV and the addition of J. Sargeant Reynolds, there was no room for anything private, unless it hitched up with a government agency like the Virginia BioTech Park, which counts moving the state's medical crime labs across town as gaining a "tenant." The state and federal governments have been parties to this land grab — whole blocks of private buildings have been turned over to the state, causing the loss of dozens of modest retailers and offices. And don't get me started on the six-block Convention Center, which when I went there week last and asked after a meeting, I had a clerk tell me that the only thing happening in this $170 million hall was some weekend volleyball. Then came the Richmond Renaissance plan for Sixth and Grace. A redevelopment scheme right out of Robert Moses, it would not have hatched without government backing its bonds.

I few years ago, I had an "aha" moment in the destruction of downtown. It was on hearing about the death of the late Taz Carrington, who served on one of these many umpteen downtown booster groups in the 1970s. He was opposed to the development of the RMA parking deck at Second and Grace streets; he felt that construction of the deck, which was to be constructed through eminent domain, was wrong on moral grounds, and he resigned in protest. I can imagine the scene when he resigned, the sort of "you're not in the club" kind of attitude so prevalent in Richmond. If only Taz "knew better," then he would be able to "understand" that it is OK to take private businesses by government writ.

I now "understand" that each successive redevelopment plan for downtown has sucked more and more life out of it, and the lack of success of the last project drives the need for the next. Well, enough is enough, and the election of Doug Wilder has brought a dose of reality and libertarian thought. While some folks don't like his brusque manner (what did they expect?), the folks that brought us the surface parking lots and storefronts ought to listen to his analysis, and not his style.

Nationwide, it is Christmas again for downtowns. In Virginia, this trend is finally taking hold. Norfolk is getting a condo tower, by gosh. With historic tax credits, even horribly scarred buildings like the old Heritage Building on East Main Street have been renovated. If you look at downtown, the only area that is suffering greatly is the area around the Center of Prosperity (and perhaps the Bottom, which suffers for geologic reasons). This shows an inverse relationship — wherever the city has sought to revive an area by these 1950s redevelopment practices, it has made it worse. Take a walk yourself at the Center of Prosperity, and look. It will make you understand that the simple answer to the problem of downtown is that the government and the quasi-government need to get out of the development business, and get back to what they aren't doing — the hard work of policing, code enforcement, park management, libraries and schools. S

Garland Pollard is editor of Virginia Living magazine and board member of the William Byrd Branch of the Association for the Preservation of Virginia Antiquities.