Jackie Kruszewski Brad Watson, left, and Ed Brogan fit extra Ricardo Padilla for a costume on the set of the AMC drama “Turn” which returns for its final season on Saturday, June 17, at 9 p.m. for a two-hour premiere.

Former band roadies and historians, erstwhile bodyguards and event planners, and yes, film students — there’s no set path that’s led these people to the stark landscape of warehouses behind the Richmond International Raceway on a rainy Monday in April. But for the last four years, for several months of the year, these nondescript buildings have become Long Island pubs, Philadelphia mansions and Revolutionary War battles.

Later this week, art department sketches will be packed up and shipped to Los Angeles. In two days, an accidental fire will burn down some of the sets built on a Powhatan County prison farm. Antique furniture, paintings and rugs will show up on Cannon’s Online Auctions, available for bidding through June 26. 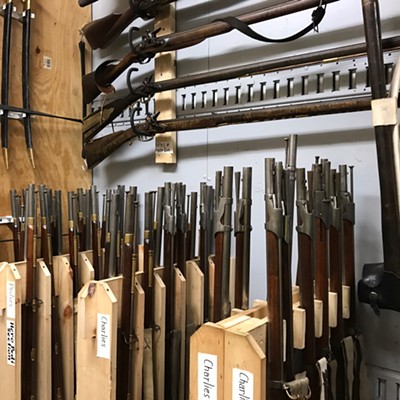 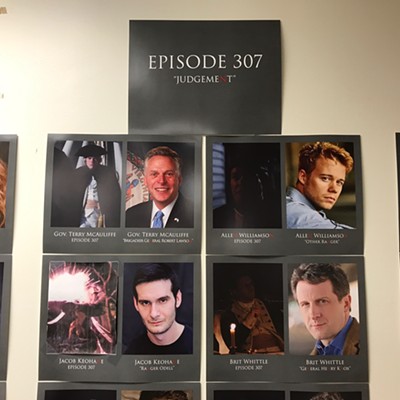 Turn Over
By Jackie Kruszewski
Click to View 12 slides

But today, it’s a long, busy goodbye for people who have spent 70-80 hours a week together since late last year. It’s the end of indoor shooting for AMC’s “Turn: Washington’s Spies,” which premieres on Saturday for the final time. NASCAR is coming to the space, and the historical television drama will need to clear out of it tonight.

“It’s like a traveling circus with your very weird family,” says production assistant Clara Kelly, 23. “But this is my life.”

Today she’s standing in the rain, coordinating the schedules of principal actors. Ian Kahn, who plays George Washington, asks her if he has time for an interview after he gets his wig on. He does, Kelly says.

“Sometimes you get the stereotypical actors that are like, ‘bring me a coffee and it must be exactly this color with cream and 12 sugars from Peru,’” Kelly says about working on other sets. “But nobody on this cast is fussy. They’ve always been really lovely.”

Inside, extras in period costumes tap at their iPhones, lounging on unadorned lumber. Outside a massive hangar door, burlap tents and a hollow, faux-stone house re-create an encampment. The side of the warehouse is painted green, so that vast battlefields can be digitally added in postproduction.

Kenneth Morton, 44, whittles away at some lumber in a nearby workshop area. “My job is, anything above your head, I make sure it doesn’t fall and kill you,” he says.

Baltimore-based Morton started his film career in security in 1992 and moved into the grip department and then carpentry. “Transformers” 2 and 3, “Argo,” “Lincoln,” “House of Cards,” “The Wire” — he rattles off past movies and shows that he’s done.

“We’re like worker bees sometimes,” says production secretary Anton Schaffner. “No one has a specified role. And like the army, you report to one person and don’t necessarily know what the person above them is doing.”

Kevin Bacon’s six degrees of separation apply to crew members, too, he says. Departments might travel in packs from film to film, and people will reunite with old colleagues in 10-year cycles.

“It’s a lot of characters,” Schaffner says. He likens it to a high school experience, especially given that “Turn” lasted four seasons — intense bouts of life in the set bubble. Sadly, he is mum on any crew and cast romance, offering simply, as you might expect, that it’s incestuous.

Kelly Farrah, prop master, has a beard as long as his résumé of work on period film. “I was a technical advisor on a movie about the John C. Frémont expedition back 100 years ago, and I got in with the prop guys,” he says.

He and his colleagues buy, rent and construct the historical objects you see in the show, such as a telescope with which one character shows another the stars.

“Bert here is like an autistic savant when it comes to the Revolutionary War,” Farrah says.

“I have the Internet,” Bert Puckett says.

The men lament the NASCAR usurpers coming to kick them out of the windowless white room where they spend most of their time. The out-of-towners will miss Richmond, they say.

“We like the historic sites and the bars,” Farrah says.

Costume designer Lahly Poore-Ericson will miss half-priced oysters at Rappahannock when she returns to her Santa Fe, New Mexico, home. “That is definitely my go-to Richmond place,” she says. “I love oysters.”

Fresh out of the wig and makeup chair, Kahn, 45, sits in his trailer and talks about playing George Washington for four years. “As the show went on, we really began to see more the person inside him and his vulnerabilities as a man,” he says, “which is one of the many strengths of the show.”

That exploration deepens in the coming season, he says.

Washington might not be the last politician Kahn will play. He says he may move out of acting and into the political realm “to see if I can help bring the country together.”

New York-based Kahn wasn’t ready to declare a candidacy to Style, but he says, “I want to declare my intention to be of service in some way and take what it is that I’ve learned from playing this man and help spread the positive sides of his message.”

“If providence is on my side,” Kahn adds in a rich, Washingtonian voice.

Back in the warehouse, Jane Sakowski-Bell of craft services stocks the snack table from her trailer parked in the warehouse. “I’m like the shrink, the bartender,” she says. “People come in here and they’re like, ‘ugh.’ They close the door, and I have to cancel everything.”

People are lured into her truck with Country Style doughnuts, Idle Hands pastries, Belmont Pizza and the occasional Proper Pie. Lee’s Famous Recipe Chicken on Fridays is popular. “I fought it for years and finally gave in,” Sakowski-Bell says.

She struggles to think about what she’ll miss about “Turn.” “In my mind, I’m on a plane to Puerto Rico,” she says, laughing. “Oh, you know what I’m going to miss? The paycheck.”

She loves everyone, though, she says seriously, and the job.

Nearly all the cast and crew members cite their colleagues as what they’ll miss the most about “Turn.” They’re the kind of people who’ll collect money for you when your house burns down, Clara Kelly says. She lived in one of the Oregon Hill row houses that burned in an April fire and says the cast and crew pooled resources to help.

The Richmond-area members of the crew say they love working in town, and for those with the right experience and connections, they can make it work. “There’s usually just enough work to make it all year,” Schaffner says. “And then, if not, I’ll go work at a restaurant for a little while, find something else to do.”

“I think at this point we’re all kind of waiting to see what’s going to film in Richmond next,” Kelly says. S

The fourth and final season of “Turn: Washington’s Spies” premieres on AMC June 17 at 9 p.m.