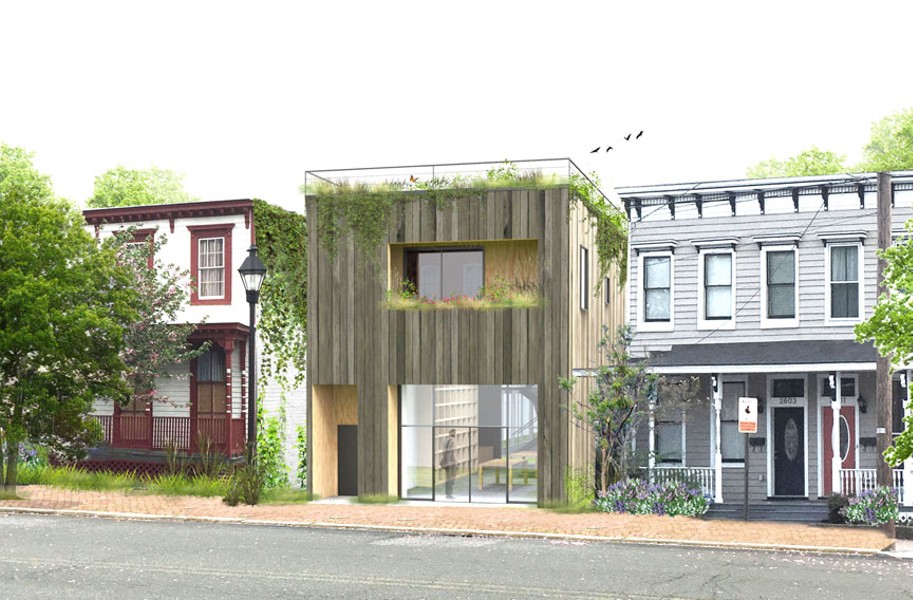 Richmond is a relatively densely built city of distinctive residential neighborhoods. Considering the number of old houses, it’s unsurprising that quite a few dwellings disappear all too regularly from neglect, fire or the promise of something newer.

Trouble is, the removal of urban building stock leaves a void in the streetscape. And seldom do empty lots add to the stability or attractiveness of the block.

It’s good that our town is being repopulated, and with increasing frequency these vacant lots are scooped up for redevelopment with infill construction. The challenge is: How do we build in architecturally and environmentally effective ways?

Sadly, there isn’t a lot of squawking when old houses are removed. Case in point: the demolition of two, 100-year-old houses on St. Peter Street in Jackson Ward last month by Ebenezer Baptist Church. Their loss further loosens the neighborhood fabric, not to mention eliminates needed housing.

And their disappearance was especially distressing because a half-dozen buildings directly across the street have been nicely restored after years of neglect, including a parade of row houses and the 1st Battalion Armory, which has been repurposed as the Black History Museum and Cultural Center of Virginia.

Interestingly, often there is a lot of chatter when architecturally contemporary infill construction occurs in old districts. This is the case with townhouses recently built on Jackson Ward’s West Leigh Street and in the Fan District on Floyd Avenue, as well as the site of the former Boys and Girls Club at Kensington Avenue and Robinson Street.

If there’s a range of opinions about these additions to the streetscape, it’s understandable. Satisfactory infill is new territory.

Therefore, it’s timely that an exhibition at the Branch Museum of Architecture and Design, “Drawing on History: Infill Design Competition,” joins the pertinent conversation on how effective architecture cannot only reknit, but also help us rethink how urban neighborhoods function.

Working with Historic Richmond, an organization long dedicated to preserving the city’s built heritage, the museum is showing a number of intriguing house designs submitted by architects and students tailored to specific sites in Jackson Ward and Union Hill. These plans result from a recent design competition conducted by Historic Richmond that encouraged entrants to follow the design review guidelines for building in old and historic districts.

Plans were submitted by a broad range of talents — from some of the community’s most distinguished architects and architectural firms, to a highly focused design class at J. Sargeant Reynolds Community College. The ideas are thoughtful, often original, beautifully rendered and intriguing to examine.

Some people argue that best practices for infill call for not mimicking existing conditions — that new buildings should reflect the scale, massing, materials and historic givens of the neighborhood. So it’s interesting that the independent jury for this architectural competition chose a project with well-articulated classical massing and elements as its first-place winner.

The award went to Kevin Svensen of Glave & Holmes Architects. His design is a glorified shotgun house with a grand front porch that leads to a succession of first-floor rooms, one leading directly into the next. Although it was designed specifically for a lot on Union Hill, it might work equally well on Monument Avenue.

Another highly traditional submission was by Beau Woodrum of SWA Architects for a vacant lot in Jackson Ward. He too doesn’t eschew traditional elements but delivers an updated Italianate design. But he takes the lightest possible touch on the exterior while arranging the handsome interior spaces for contemporary living and to allow the maximum daylight.

Another highly effective design, but one that eliminates any traces of décor, is the joint effort of Madge Bemiss Architects. Bemiss and associates Jillian Chapin, Mary Lorino and Bill Church take a deep lot in Union Hill and push the main house to the front, angled sidewalk while placing a secondary residence on the rear of the lot. It’s clear from the simplicity of line and crispness of materials that this could be one of the more affordable houses to build.

Edwin Baruch has sustainability at the top of his mind with a dramatically contemporary, almost cratelike dwelling for Jackson Ward. It calls for exterior cladding in rough-hewn, recycled wood and establishing a green roof with foliage tumbling on the edges and cascading downward.

Pushing the envelope even further are designs by New York-based Emma Fuller and Michael Overby. For a deep, narrow lot on Union Hill, they suggest placing a beautifully and sculpturally formed dwelling to the rear and offering up the front yard for a small public park.

Here, and for their Jackson Ward proposal, they also challenge the idea of a single building mass. Instead, they offer a series of shapes and forms that intentionally challenge general expectations of townhouse design.

So what does it all mean?

First, those with an interest in how Richmond is being rejuvenated shouldn’t miss this intimate, but idea-packed exhibition. And the curators have culled a few common denominators from the submissions and listed them for our consideration: Porches are a good thing, make room for artists, planted rooftops are a plus, and micro-apartments — as small as 380 square feet — could be in our future.