Is a VCU research team close to a cure for Parkinson’s disease? 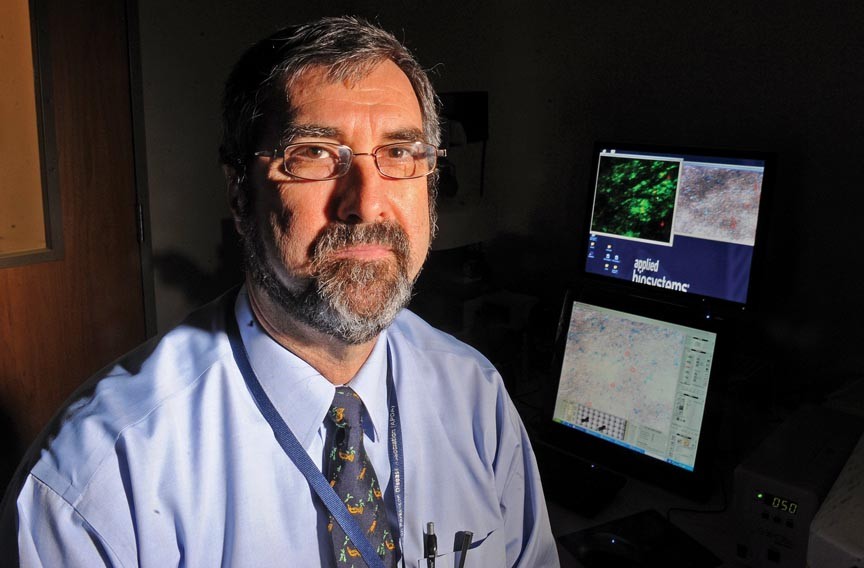 For years, doctors have treated the Parkinson's disease symptoms they could see: the shaking hands, the stumbling feet.

But one of the likely causes of Parkinson's is almost invisible. It's buried deep within brain cells, where tiny engines called mitochondria slowly are shutting down.

Now a team of researchers at Virginia Commonwealth University, and a biotech company in Charlottesville, say they think they've found a way to rev up those engines once again, potentially reversing the disease.

Every cell in your brain is packed with mitochondria — tiny engines that generate the energy cells need to function. But sometimes these brain cells do a curious thing. They turn off the signals to make mitochondria, depriving themselves of power. The tiny engines sputter and eventually cease to operate.

Essentially, "the brain is divorcing its mitochondria," says Dr. James P. Bennett Jr., director of the university's Parkinson's Disease and Movement Disorders Center. This, scientists recently discovered, appears to be a likely root cause of Parkinson's disease, Alzheimer's disease, and other heretofore mysterious brain disorders.

In 2004 one of Bennett's graduate students, Shaharyar Khan, developed a way to deliver healthy mitochondrial DNA directly into mitochondria via a protein carrier. In mice and cultured human cells, this method of gene therapy has been shown to revive the mitochondria, restoring the cell to normal function.

In January the researchers asked the U.S. Food and Drug Administration for approval to begin human clinical trials. The approval process may take a while, but Bennett's optimistic the team will be able to begin the trials this year.

Trimmer shows speeded-up video clips of two sets of mitochondria, which look like tiny white rods traversing a long, narrow nerve cell. In the first video, they creep like rush-hour traffic. In the second video, after being treated with the laser light, they're zipping around like go-karts.

Trimmer hopes to begin human trials within two to three years. "It's not going to cure the disease," she says, "but it might keep patients healthier longer."

Parkinson's most often affects people older than 50. The National Parkinson Foundation estimates that 1 million Americans have it, and that more than 50,000 people are newly diagnosed each year.

Richmond is home to a small but influential Parkinson's advocacy group, the Movers and Shakers, founded six years ago by David C. Reynolds and Charles F. Bryan Jr. The dean of the VCU School of Medicine told them if they could raise $5 million for the Parkinson's center, he'd match it. They did.

Patients, doctors and researchers typically inhabit separate worlds. "I have to go different places here and yonder to see the different specialists that I need to see," Reynolds says. And lab researchers rarely, if ever, meet real patients.

But as part of its new focus on uniting research and medical care, VCU's trying to bring everyone together. In June the university opened a clinic at Reynolds Crossing on West Broad Street where patients with Parkinson's and other neurodegenerative disorders can see every specialist they need in one place. The clinic already has seen 200 patients.

Dr. Claudia Testa has seen patients suffering from tremors who went years without being diagnosed, or were told by doctors "don't worry about it." What they want, she says, is for doctors to "hear my story, understand it and make a plan."

Patients are eager to sign up to participate in clinical research, Testa says, because they want to help develop a cure. And they've waited a long time for some good news. "I'd say the public is hopeful but disheartened," Bennett says.

"So I've definitely got to figure this thing out," Bennett says. S

James P. Bennett Jr. will give a free seminar on understanding Parkinson's disease on Tuesday, April 24, from 5:30-6:30 p.m. at Lewis Ginter Botanical Garden. The Shakin' Not Stirred fundraiser for the center will take place April 19 from 6:30-9:30 p.m. at the Hotel John Marshall. 828-3747. A free summit on Parkinson's will take place Saturday, May 19, from 9 a.m to 3:15 p.m. at the Greater Richmond Convention Center.