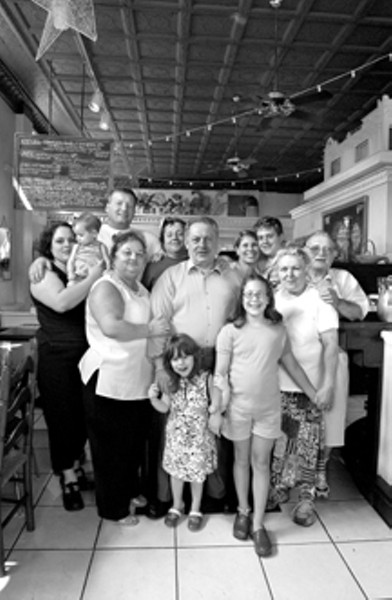 “If that drinking crowd starts getting on my nerves I’ll shut down at 11 p.m. — I’m a tired old man,” Johnny Giavos says from behind a desk in his office above the popular neighborhood grill he started with his wife, Katrina, 12 years ago. Sidewalk Café, which once attracted a rowdy bar crowd, today has grown up a bit, just like its owners. And Giavos is glad; he makes more money from food sales anyway. That’s why he’s trying to add seating outside for the lunch and dinner shifts, but he’s been trying for so long he’s almost tired of the fight.

The Giavoses were bred to be a successful restaurateurs. Johnny began working the register at Gus’s Corner, his dad’s lunch place downtown, when he was 9. Katrina started waiting tables at her parent’s Village Café at Harrison and Grace streets when she was 8. Although they learned the lesson of hard work from their parents, the second generation runs their restaurants differently. “I put more trust in people, I let others be responsible,” says Johnny, whose parents never left their restaurant. He had to talk Katrina’s mom, Stella, into leaving a couple of shifts to another cook at their Mediterranean café named in her honor. “I like my time away, I like to coach the soccer kids, something my parents never had time to do,” he says. Yet Johnny still regularly cooks at both Sidewalk and Stella’s, and sometimes he simply can’t get away.

“You go through your times where everything is going good, then you go through times like now where I’m trying to find people to cover shifts.” Johnny says he’s supposed to go on vacation, but will be forced to send his wife and children without him because he’ll have to pick up shifts.

For him, there was never any question that he would go into the restaurant business. It was just what he knew. “Most people go to college and learn a trade,” Johnny says. “I learned to cook, bartend.” Although his 13-year-old son, Dean, has bused tables, Johnny says he’d rather his kids not get into the family business. “I’m trying to make them go to schools; that’s what I’m going to preach.”

Today, Johnny feels maxed out. With two restaurants and a partnership in a third, Kuba Kuba, he’s not interested in opening any more. “This has become too much, I’m tired. Two dogs, two kids, a wife, soccer practice, swim meets. I can’t do anything anymore; I’m killing myself.” So instead of running restaurants, he has begun buying Fan buildings that house restaurants. He also helps those restaurants when they need it, like putting a new air-conditioning unit in Sticky Rice.

As for his own restaurants, Johnny’s secret is using the same ingredients in many entrees to keep food costs down. “Here I take a chicken breast and cook it 40 different ways,” he says. At Sidewalk, he’s cheaper than Arby’s, he adds. “You come to my place, and hopefully you’ll get a deal, and you’ll say that was nice and you’ll come again.”