The Bitch Comes Back 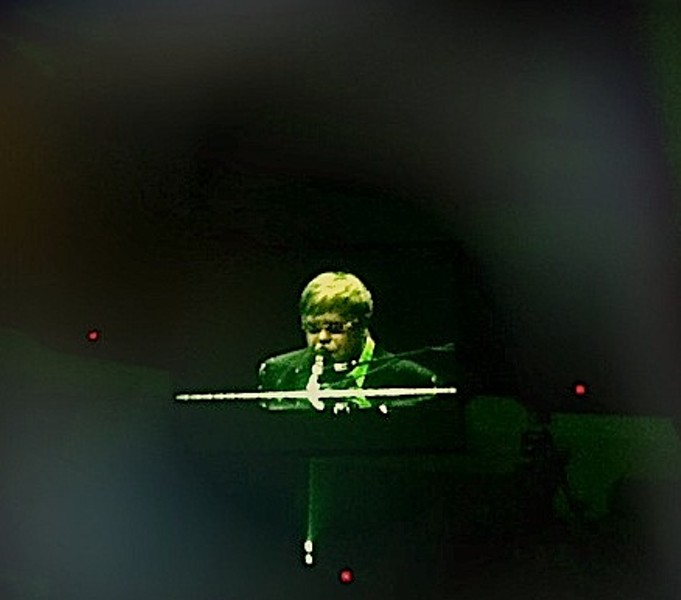 March Madness is in full effect and the Virginia Commonwealth University Rams are battling the storied Indiana Hoosiers on TBS. I’m watching the first half, rooting along for the home team with an older crowd in the downstairs bar at the Richmond Coliseum. It’s a tight first half, I’m into it, but at quarter to eight I have to go find my seat. There’s a living pop legend in town, a queen actually, and he’s about to play his version of relentless Ram ball on a big black grand piano.

As soon as I take my seat, a pre-recorded video message pops up on the large screens above the stage. One of the world’s all-time best-selling musical artists, Sir Elton John, politely introduces us to his opening act: a pair of Croatian cellists, Luka Sulic and Stjepan Hauser, also known as 2Cellos. Their flashing bows are soon sawing away at a rocking classical version of Michael Jackson’s “Smooth Criminal” as a Coliseum packed to the rafters roars its approval. The brothers play only a few numbers, highlighted by a raucous “Highway to Hell” AC/DC cover, before taking their place as backing members in John’s band; later, their deep tones and expressive playing will provide dramatic flourishes during longer ’70s songs such as “Levon” and “Madman Across the Water.”

The crowd erupts when John makes his grand entrance wearing glittery, ornate black and green coattails, a lime green shirt and green-tinted glasses—kind of like a Powerball Lotto leprechaun. Backed by familiar longtime players, including drummer Nigel Olsson and guitarist and mandolinist Davey Johnston, John launches into barn-burning opener, “Saturday Night’s Alright for Fighting” quickly followed by the familiar stomp of “Benny and the Jets.”

Clearly, the 64-year old John still has stamina in spades. Springsteen. the Rolling Stones. Andrew W.K. He’s right there, no breaks needed. He won’t stop tickling the ivories, or vocally belting out the hits, for the next three hours. During his triumphant return to Richmond, John and crew deliver a musically impressive, high energy marathon set packed with his best hits and a few rarities like 1970’s “Holiday Inn” and 1973’s “I’m Gonna be a Teenage Idol” from the “Don’t Shoot the Piano Player” album. No “Lion King” kiddie stuff tonight, or flashy costume changes—though there is a Vegas-worthy light show. Tonight is all about a veteran showman delivering another well-executed extravaganza for top prices. Only a few stars can charge in the hundreds and have people walk out saying it was worth every penny. John is one.

Vocally, he may not be able to hit those sweet high notes anymore, but his voice still has plenty of punch—and the backup vocalists do a nice, subtle job shoring up the rest. Another key was pacing and song choices: This is an artist, after all, who has sold 250 million records worldwide (35 gold, 25 platinum), played more than 3,000 concerts, and holds the record for biggest selling single of all-time, “Candle in the Wind,” his ode to Princess Diana, which he played tonight. The crescendo moments -- where the band, featuring some great additional percussion work by John Mahon, jammed out the closings of songs -- were among my favorites. They never went on too long, showcasing John’s still nimble playing. He may not jump around much anymore, but he seemed in good spirits and made a point of standing up and pointing at the crowd, applauding them, after nearly every song.

The FM hits from the ’80s that I thought would annoy me, didn’t. Minus the crappy ’80s production values, they sounded stronger in a live setting—especially with four terrific female back-up singers led by Rose Stone, a founder of Sly and the Family Stone. Among the predictable highlights: “Tiny Dancer,” which John dedicated to the screaming ladies in attendance, a rollicking “Honky Cat,” the tropical cruise-line blues of “Don’t Let The Sun Go Down On Me,” and the upbeat “Crocodile Rock” to close the long set with the audience singing along during the high “lah lah” part. Another highlight for the crowd occurred when a pair of young male dancers, who looked like J. Crew models, was invited onstage by John for some high energy tag-team dancing.

As if it wasn’t clear from the show why his fans love him so, John gave another reason before the encore. He came back onstage and signed at least 40 different autographs (vinyl and tickets) along the front row before sitting down at the piano for an indispensible ballad that, as he explained: “without [it], I wouldn’t be here.” You know how it goes, especially if you grew up in the ’70s. “Your Song,” delivered tonight with the Croatian cellists helping out, can still send chills with its simple, emotional urgency.

During the show, I kept checking my phone for VCU score updates—and midway through “Rocket Man” the final score came in. City-wide bummer. We should have had that one. But who can complain? It was an unexpectedly great year for Rams fans. And as John emotionally implored from onstage, Shaka Smart should stay here in Richmond (or at least that’s what I heard in my head).

Actually, it was fitting what song John played right when the game ended: a slightly rearranged, soulful rendition, with poignant, gospel-like chorus, of “I Guess That’s Why They Call It the Blues.”

Bennie and the Jets

Madman Across the Water

All the Young Girls Love Alice

Candle in the Wind

I Guess That’s Why They Call It The Blues

Funeral for a Friend/Loves Lies Bleeding

Someone Saved My Life Tonight

Sad Songs (Say So Much)

I’m Gonna Be A Teenage Idol

Sorry Seems to be the Hardest Word

Don’t Let the Sun Go Down on Me