The Birth of 'Indy' Rock 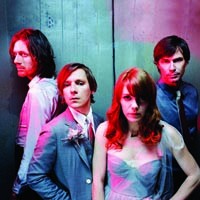 Jenny Lewis is indie-rock royalty. The boys want her and the girls want to be her. The singer not only fronts one of the most successful bands in the genre, Rilo Kiley, she also lends her talents to The Postal Service and The Watson Twins. She was a child star, acting alongside everything from Jell-O to The Golden Girls and even an unknown named Angelina Jolie in the chick flick “Foxfire.” Remember “Troop Beverly Hills” and “The Wizard”? Yep, Jenny's in there too. She may well be the most famous person you've never heard of.

So it's only natural that I should want to talk to the lovely and talented Ms. Lewis to glean some previously unknown truth. And that she'd be too busy to do so. And that the publicist would suggest passing me from the doe-eyed beauty to her bandmate, Blake Sennett. Fine. He's partly responsible for Rilo's clever lyrics and can provide sufficient insight into the world of Jenny. He's also the current beau of Winona Ryder, so I'll come away with some Hollywood dish while I'm at it. There's no way an interview with Sennett can go bad … unless it doesn't happen.

Due to a scheduling conflict, he's unavailable the day of the interview and I'm transferred to the next available bandmate, bassist Pierre de Reeder. I will take anyone who is around Jenny Lewis long enough to tell me if she wears footie pajamas to bed or has an insatiable craving for circus peanuts on occasion. Surely, Pierre knows something.

Mainly it's stuff about how well the new material's working out on the road.

“It's going good. We play new material a little more heavily in our set, but definitely include the back catalog of our stuff,” says de Reeder.

The Los Angeles-based band has been around for nearly ten years, so it comes as no surprise that eventually the musicians would venture outside their sonic comfort zone to try something new. The band's most recent release, “Under the Blacklight,” departs slightly from its older albums — incorporating more synthetic sounds like drum-machine kicks and poppy hand claps glazed over catchy melodies while lyrically exploring the seedier side of life with cuts like “The Moneymaker.”

These days, Lewis takes the stage in hot pants and stilettos, but her pristine vocals remain as simple as the country dresses she once wore onstage. She's flanked by the same guys who have been by her side since the inception of the group in 1998, with the exception of drummer Jason Boesel, who joined in 2001.

Rilo Kiley remained entirely independent for the majority of those years, garnering major respect in the music world before officially signing with Warner Bros. after the label distributed the hugely popular “More Adventurous” release in 2004 on Brute/Beaute Records. Even after the big-label, rags-to-hot-pants success, de Reeder describes their dynamic as relative.

“We're definitely all family and we love each other. We're friends first and musical partners second,” says de Reeder. He adds that if you survive all the clichAcd things that bands face, like clashing personalities and such, it “makes for mature, loving and understanding relationships.”

When I ask, “What's the one thing people would be surprised to know about your band mates?” (hoping for some revelatory Jenny insight, like how she really felt about watching the Paris Hilton sex tape with her band), it's as if I've asked him to explain quantum physics. He falls silent and says, “I'll have to come back to that one.” He's much more interested when I bring up politics, talking about how Obama will save the world. Just when we've found our comfort zone, he tells me to hang on. “Oh wow. We've gotta go to the ‘Indiana Jones’ premiere in, like, four minutes,” he says. Belly-up goes the interview. The indie band becomes an Indy band.

Via e-mail two days later, de Reeder apologizes for ditching me for Dr. Jones and finally answers my questions about his band mates. He writes that they are constantly on a “desperate search to find the nearest Chipotle in every city.” As for some insight into the players: “Jason is an up-and-coming air hockey enthusiast. I've never seen ‘The Big Easy’ and Blake's got a mean twelve-footer from the side of the hoop,” he writes. Then the clouds part: “And, Jenny has never seen Star Wars.” So the indie queen does have a yet-uncovered secret after all: She's never seen a blue elephant playing a flute in a bar. S

Rilo Kiley plays Toad's Place Sunday, June 8, with openers Thao with the Get Down Stay Down and Benji Hughes. Doors at 7 p.m. Tickets are $22.50-$25. Call 648-TOAD or visit www.toadsplacerva.com.