The Big Come Up

Radio Moscow brings the ’60s back to life. 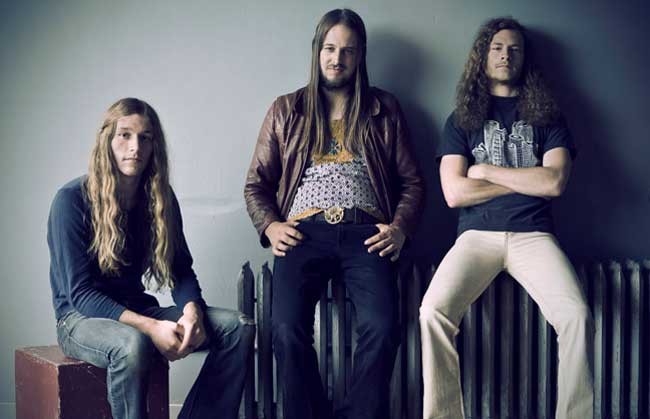 When a band passes off an unsolicited demo to a record label, nine times out of 10 it doesn't receive even a cursory listen. In the case of the Black Keys, however, mailing the head of Alive Naturalsound Records a rough copy of "The Big Come Up" earned the duo a contract and an official release.

When Radio Moscow frontman Parker Griggs handed the group's demo to the Black Keys' merchandise guy, he had no idea that the Keys' Dan Auerbach was going to pay it forward. After falling for the power trio's heavy psychedelic blues, Auerbach brought Radio Moscow to Alive Naturalsound and offered to produce its eponymous debut.

"It was all recorded on his vintage '60s reel-to-reel," says the Iowa-bred Griggs, on the phone from his current home base in Northern California. "We recorded it pretty quick without much overdubs, so it's simple and to the point."

Folks who think Blue Cheer is chronically underrated or that Fleetwood Mac peaked in 1970 with its 24-minute, live version of "Rattlesnake Shake" quickly caught on to the band's swampy, zigzagging guitar jams, pounding percussion and vocals reminiscent of Cream's Jack Bruce. Subsequent touring brought Radio Moscow through Richmond a handful of times to perform at the cozy, now-defunct venue Nara Sushi. "(Nara) was usually packed, the crowd was right in front of the band and they got into it," Griggs says.

To record the follow-up to their second full-length, "Brain Cycles," Griggs and bassist Zach Anderson moved out to Prairie Sun Recording, a secluded ranch in Cotati, Calif. "The area doesn't get phone reception or much of anything, so we were out here being loner mountain men trying to make music," Griggs says. The result was 2011's wild and grizzled "The Great Escape of Leslie Magnafuzz," a record that landed on many year-end top 10s. If Jimi Hendrix had stretched the opening feedback on "Foxy Lady" completely over that song's chunky riffs, waxed the screeching wah-wah, and tossed in harmonica, sonically it would resemble the latest songs from Radio Moscow. "I think the new record is a little more intense, more in your face," Griggs says.

Currently on tour with like-minded Swedish act Graveyard, Radio Moscow recruited a member of the '60s psychedelic scene to help flesh out its performances visually. Lance Gordon, as Mad Alchemy, originally projected his liquid light shows onto venues like the Fillmore and Avalon Ballroom in San Francisco. For this tour he'll be creating a chemical-induced backdrop for Radio Moscow's sizzling sets of rock 'n' roll. Says Griggs, "We're really going for it."

Radio Moscow will appear with Graveyard on Jan. 17 at Strange Matter. Doors open at 8 p.m. and tickets cost $12. For information, go to strangematterva.com.