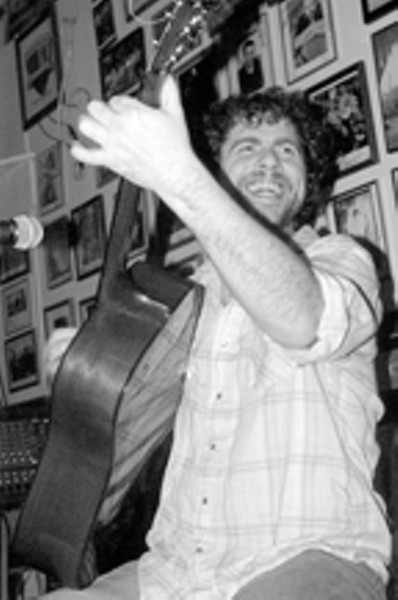 Chris Smither and Mark Erelli, Ashland Coffee and Tea, May 15

This rare acoustic solo show by Drive-By Truckers frontman Patterson Hood was three hours of mayhem and magic. Hood’s tunes combine the rowdy and the reflective, and he’s among the best pure songwriters in rock ‘n’ roll today.

This multidimensional Americana outfit has become a welcome fixture at Ashland. This show was particularly warm and soulful.

The Paschalls singing “This Is A Mean Ol’ World” at Dogwood Dell, June 29

Just thinking about this performance gives me goose bumps. The life-affirming five-part harmonies of this Norfolk, Va., group are enough to melt the hearts of even the most jaded souls. Traditional hard gospel at its finest, the Paschalls are a force of spectacular beauty and grace.

Rarely is the blues played with such passionate conviction as when this two-man band from Akron, Ohio, appears. Loose and reckless, the gritty melodies of the Black Keys are a tenacious reminder that the best blues is played dirty and mean.

Alhaji “Papa” Susso at the Festival Karamu, The Hippodrome, April 18

The pulsating rhythms and intricate melodies of Gambian Kora master Papa Susso are the definition of joyous release. A vital audio portrait of the African nation’s melodic past and future.

Reflecting upon the raw blues music of Howling Wolf, late Sun Records producer Sam Phillips remarked that Wolf’s sound was where the soul of man never dies. That’s how I felt when I heard the ageless Ralph Stanley sing his trademark a capella version of “Oh Death” at the Carpenter Center. Ralph was in a feisty mood that Friday night — the morbid Appalachian ballad felt less like a resigned plea of old age than a defiant battle cry being spat against time and decay. Stirring and inspirational.

Memorable concert moments don’t have to be musically great to linger in the ear. Take Bruce Springsteen and the E-Street Band’s Richmond encore — a homage to the late, great R&B singer Hank Ballard (of ’50s pioneers the Midnighters) that featured onstage appearances by two well-known Virginia homeboys, Bruce Hornsby (on accordion!) and Robbin Thompson. While there were more missed cues than you’ll find in a season of cable access, this inspired Coliseum singalong was filled with electric, spontaneous twists and turns. The rest of Springsteen’s well-rehearsed and Herculean show, while nostalgic and fun, could’ve used more of this kind of inspired sloppiness and unforced camaraderie.

Sonny Rollins at the Ella Fitzgerald Music Festival in Newport News, May 2

The best complete performance of the year was Sonny Rollins’ transcendent appearance at the Ella Fitzgerald Festival.

The best song of the year was Rene Marie’s amazingly affective alloy of “Bolero” and “Suzanne.”

International Society of the Bass Festival at the Modlin Center, June 7

The best moment in live music this year was the last note of John Clayton’s closing solo at the final concert of this festival held at the University of Richmond. The song, “Nature Boy,” was dedicated to the late Ray Brown, Clayton’s friend and mentor and a longtime supporter of the ISB who was originally scheduled to perform that night. The playing was achingly precise, the sense of lost joy palpable. The interpretation was lyrical, and when the melody reached the last word of the song, “return,” a single string resonated pure and strong in the silent hall. Then Clayton reached up, turned the tuning peg, and gently, irrevocably, the ringing tone fell and faded. S