The Best Coaches Stick Around 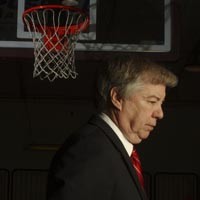 In college sports, the staid, venerable coach is becoming extinct. University of Richmond football coach Mike London wins a national championship and within a year leaves to take over as University of Virginia's head football coach. Virginia Commonwealth University's Jeff Capel takes the men's basketball team to the NCAAs after an eight-year hiatus in 2005, then leaves for Oklahoma. Anthony Grant replaces Capel in 2006 and upsets Duke in the tournament, leaving after three years for Alabama. UR men's hoops had defensive wizard John Beilein before he left in 2002, eventually landing the coveted head coaching job at Michigan.

And then there's Dave Robbins, the 30-year coach at Virginia Union University, who retired in 2008. In a town with a strong hoops legacy (think VCU's J.D. Barnett and UR's Dick Tarrant), Robbins easily is the most successful. He won three national championships in Division II, 12 conference titles and produced five NBA players — sturdy, old school studs like former defensive player of the year Ben Wallace and Charles Oakley, a defensive intimidator who once slapped Charles Barkley across the face.

Robbins' boys were tough, and played hard-nosed D. Robbins recruited inner-city kids and somehow convinced them to spurn their ball-hogging heroes, Aÿ la Kobe Bryant and Michael Jordan, to play team defense. And they won championships. Best of all, Robbins never expressed any interest in career-climbing and seemed to enjoy toiling away in relative obscurity — literally. He kept his office in the basement at Barco-Stevens Hall and served as his own secretary.