The Beat Goes On

British singer Dave Wakeling on the passing of Margaret Thatcher, his musical education and NASCAR moment. 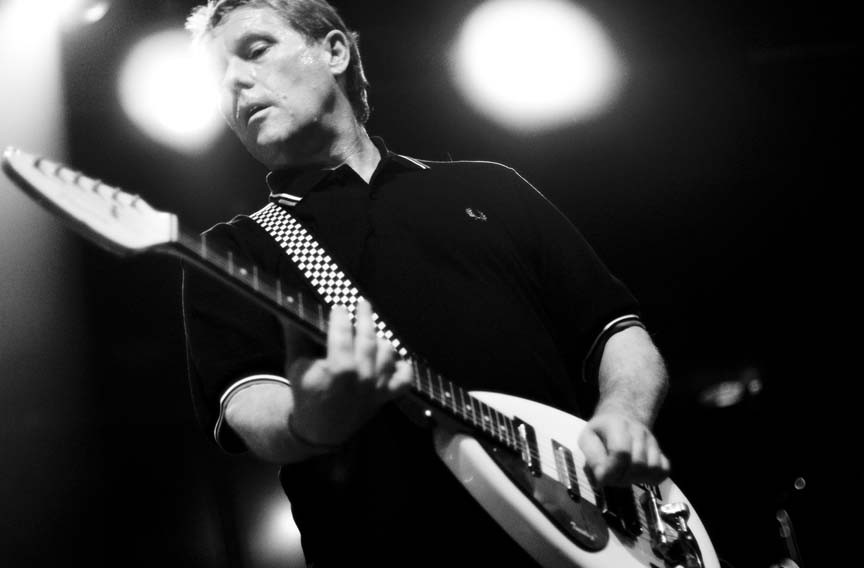 Dave Wakeling seems like a man with his heart in the right place.

He's known fame as a founding member, lead singer and guitarist for British band the Beat, or the English Beat as its known now in its American-based touring version.

Rolling Stone recently listed its debut album as No. 64 on a list of the top debuts of all time. "I noticed that Roxy Music was 66," the grainy-voiced Wakeling says by phone. "To be slightly above them was amazing to me."

The Beat burst out of the 2 Tone ska revival scene of the late '70s with a charting cover of Smokey Robinson's "Tears of a Clown" and later had its own hits with the oft-covered Wakeling tune "Save It for Later" and "Mirror in the Bathroom."

The band's lively dance music was led by Wakeling's gritty, soulful vocals out front with harmonies and the uptown toasting party vibe provided by cohort Ranking Roger, who kept things upbeat even on scathing political tunes such as "Stand Down Margaret" [Thatcher].

At the time of our interview, Thatcher had just died.

"Although I rejoice in no one's death, Margaret Thatcher's passing is an important event for those who lived under her regime," Wakeling says. "She made competitors out of neighbors and people stopped talking at bus stops, even about the weather, in the shadow of her affected, pretend posh accent. Margaret made herself big on the tears and suffering of others, more Cromwell than Churchill. Yet however much pain she caused us, I wish comfort and solace to her family."

Wakeling's last big hit came in the '80s with the MTV classic "Tenderness" from his post-Beat band, General Public. Afterward, he moved to Los Angeles and raised a family. Since his children have grown, he's been steadily touring the country, playing the familiar old hits with a smattering of newly recorded material.

In 2006, his eye-catching Vox teardrop guitar went on display at the Rock and Roll Hall of Fame and Museum in Cleveland, right next to the guitars of Kurt Cobain and Jimi Hendrix. ("I know the guitar is telling all the others that I haven't left it," he says. "And that I'll be back shortly.")

English Beat songs have been covered by major artists including Pete Townsend, Pearl Jam and Elvis Costello, who helped convince Wakeling to return to music after a sabbatical he took to work with Greenpeace. The label Shout Factory recently released a box set of all the English Beat albums, including a disc of its extended 12-inch mixes and John Peel sessions and a DVD of the band's performances at the legendary US Festival in 1982-'83.

Wakeling, a charming guy who still seems genuinely smitten with music, spoke with Style Weekly in preview of an upcoming concert at the National.

Style: What was your music education?

Wakeling: Learning your way from anybody who wanted to teach you anything [laughs]. ... I auditioned for the cathedral choir in Birmingham, three days a week plus weekends. Dropped out of that straight away. Then came the school choir, I remember we sang slightly flat.

At the time it appeared to me that education was really just training you in a certain way to produce in the marketplace. Music depends on looking outside of the box, not training yourself to produce well inside the box. That's why I avoided it. ... I was a great mimic as a kid. I could do a quite good Robert Plant as a teenager. Passable Bryan Ferry. Really quite decent Elvis Costello. When I started, that was all I could hear were my influences. Three months into doing shows, someone came to me and said, "You've got one of the most original voices I've ever heard." I argued with them but they wouldn't have it ... that gave me more confidence, I suppose. Turned me around a bit.

Do you remember the first concert you ever saw?

I saw a concert at a school dance when I was 12 or 13, with a band called Locomotive and a band called Timebox who had a hit. God, that must've been 1969 or something. But the first time I remember going to concerts where it made a huge impression was seeing two local bands over an eight-day period. The first was Black Sabbath. The second was Led Zeppelin. At the end of that week, I was like "Can I be in a group then?" [laughs]

Did you ever have to take side jobs or teach?

No, I didn't have to teach. I did take a sabbatical for five years where I worked for Greenpeace in Los Angeles. And I made an album to promote the issues around climate change and global warming. But I've been very lucky. ... It's been quite a long job building back up to where it is now. We play about 150 shows a year, quite a decent national following. Each time we go around we spread the net a little wider. We have 20 new songs and are about to finish recording those. We will bring out songs every two or three months on the Internet, kind of a novel approach.

"Oh my God, the highlight of my career! The US Festival, meeting David Bowie, Smokey Robinson. Pretty good. But two songs in 'Scooby-Doo,' the whole episode based around your work? The only thing that ever came close was someone phoned me on a Sunday morning and said, 'Turn on NASCAR Roundup.'" -- Dave Wakeling of The English Beat tweet this

Have there ever been talks about a huge ska package tour?

There has been by me, but they always seem to be blocked in the distance. The Selector and the Specials don't want to work with anybody else, or any other 2 Tone band. We very nearly got a General Public tour together for this summer ... but I wasn't sure I'd make a penny after I made them all happy. There was going to be a greatest-hits album [but there was an issue between record labels]. ... One of the problems about English artists is I don't think they can imagine America could have a recession, because they never saw that when we were touring — it always looked like the land of the plenty, didn't it? So the English bands have that presumption, a limo waiting at the airport. But times have changed quite a bit.

Where would you rank scoring the "Scooby-Doo" cartoon in your musical journey?

Oh my God, the highlight of my career! The US Festival, meeting David Bowie, Smokey Robinson. Pretty good. But two songs in "Scooby-Doo," the whole episode based around your work? The only thing that ever came close was someone phoned me on a Sunday morning and said, "Turn on NASCAR Roundup." They were playing "Save It for Later," telling the story of a car that had come from the back to win. I thought well, I am now a thread in this great American tapestry. I have become part of the greatest nation in the history of the world [laughs]. But "Scooby-Doo" even surpasses that for me.

The pop song "Tenderness" is closely associated with the '80s. How did it come about?

A friend in radio told me it was the No. 1 played track for the entire '80s, which surprised me. It took about a year to write. I was on tour, driving with the bus driver, trying to avoid the party. I really enjoyed driving through the night, playing on the CB. There was something about the sound in the cabin of the truck, that soothing hypnotism of the road. I was traveling around America searching for something. Of course, the tenderness is only ever inside you — but you spend your whole life searching for it outside. The signature riff came from the sound of the truck, like a 1950s country and western song about devastated broken hearts. Maybe that's why, even subliminally, it touched the hearts of people in America. It's not obvious that it has the sound of the freeway. But we all know that feeling.

The last original Beat show was with David Bowie's "Serious Moonlight" tour. When I got offstage, Bowie ran up and said: "You're the best opening band I've ever had. Will you please come on tour to America with me?" But I had already turned in my resignation letter under the door of the Beat office! I was flabbergasted. I dashed back to Birmingham — never told anybody this — but I could see the letter in the letter box beneath the door. I got a stick that was growing from the base of a tree. At 2 a.m. in the morning, I'm fishing for this letter. I got so close, I got the touch of it, but it lifted and pushed it further away. I just sat there on my knees. It really dawned on me at that point. ... So I went home. [Bowie] took Dexy's Midnight Runners on tour and sent them home after two weeks of being crap [laughs].

You're one of the few artists I've seen who still seems to convey real joy, even when playing your greatest hits, which fans have demanded for over 30 years now. What keeps you young, as it were?

For me, there's a suspension of time as I'm singing. You feel a connection with the audience and the universe. It sets my soul free. It stops time. During the song, you don't know whether it's lasting forever, or it's taking just a moment. Could be the 1980s or it could be now.

The English Beat with guests perform at the National on Saturday, April 27. Tickets are $15 in advance, $20 at the door. Doors open at 7 p.m.