The Bear Pokes Back 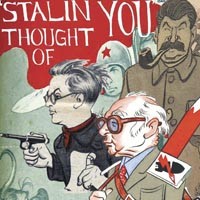 By his death in 2008 at the age of 108, Russian political cartoonist Boris Efimov had drawn and satirized almost every world event in the past hundred years. There was his country's revolution, the conflict of two world wars and the ensuing stalemate of democratic and communist powers leading to the modern 21st century. In his directorial debut documentary, “Stalin Thought of You,” Richmond native Kevin McNeer seeks to understand the complex life and caricaturizing wit of this renowned illustrator. Using historical footage, public records, even conducting his own series of filmed interviews in Moscow with Efimov in 2005, McNeer's intimate portrait demonstrates the power a strong image can have on the public consciousness and how those in authority react when threatened by those images. Featuring post-viewing discussion, Randolph-Macon College invites guests for a screening of the film at 7 p.m. on Oct. 27 in the Topping Room of the Old Chapel. Free. 752-7342.