The Audacity of Coats

After the swearing-in, the coats are shed and the parties start. 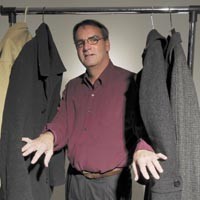 The presidency of Barack Hussein Obama is only 300 minutes old, but from the voting booths to the National Mall, it has become characterized by long lines. It's Andy Hulcher's job to stop them, at least at the coat check.

More than 40,000 people will storm the Walter E. Washington Convention Center in the nation's capital for six of the 10 balls celebrating the inauguration of Vice President Joe Biden and President Obama. Hulcher's Richmond-based company, YES Events, is in charge of coat-checking for all of them.

Obamamania or not, coat checkery can go seriously wrong. After the inauguration of the first President Bush, the coat-check lines at one ball backed up so much that agitated Republicans stormed the racks and liberated their own coats. It earned the nickname the Bastille Day Coat Check of 1989. Across town, a similiar scene unfolded for Hulcher, who was staffing his first inaugural gig. “The crowd turned into a mob and overturned the table,” he says. “It's one of my nightmares.”

Five days earlier over fried oysters, beef carpaccio, octopus salad and scallop appetizers at Zeus Gallery CafAc on Belmont Avenue, Hulcher shared with his management staff a theory from the other end of the food spectrum. Ray Kroc, the founder of McDonald's, once postulated that if people only have to wait in line three and a half minutes, they're fine. Longer, and they're in trouble.

Men in tuxedos and suits stand by while their dates — in lots of floor-length jewel-toned sheaths — trade their street shoes for spikes, straps and wedges that will further torture their feet after a day of slogging through the streets of Washington.

Meanwhile Hulcher's people, 230 of them in tuxedo shirts and bow ties, wait behind rows of tables. Per Hulcher's instructions, the most attractive workers man the tables while others run the coats down the aisles of racks behind curtains hung over rods. Under no circumstances are employees allowed to touch the tips collecting in wicker baskets. Four guys circulate among the tables to scoop up the bills and manage a cash-counting operation in the back of the VIP room.

Hulcher's missing a stem from his glasses, which got knocked off on the Metro that morning. So the frames slip around, magnifying his eyes, giving him an owlish look. He spent the morning doing battle with the Secret Service, which kept him locked out for two hours while straightening out his credentials. But that's all passed and Hulcher's team is in the field.

Bastille be damned, Hulcher has drawn checkers and managers from all corners of his life. He hired one while playing in a cribbage tournament in Virginia Beach. He was impressed with how a local bartender, Laura Dunning, multitasked — working the bar and keeping up with his banter. She's now managing one of the six coat check stations.

“I thought he was full of shit at first,” Dunning confesses. She did not vote for Obama, she says, but she's glad to be on board and has brought along her sister and a friend from Roanoke. “It's once in a lifetime,” she says. “It's a historic moment and we're going to be part of it.” Hulcher vows that if no one steals a mink he'll fly himself to a cribbage tournament in Reno next month.

“They're from all walks of life,” Hulcher says of his employees. “This is actually a bad trait, or so people tell me it is — I start off trusting people until they give me a reason not to.”

The evening rolls on and the celebrity sightings begin. Queen Latifah. Oprah and Stedman. On their tour of all 10 balls, the Obamas are secretly ushered in and out of the building without checking their coats.

Hulcher's demeanor is calm but he remains in near constant movement scampering between the six stations, sometimes plunging his hands into the racks to correct ordering errors, observing the first floor from the staircase to make sure the line is moving swiftly.

“If everything goes right, no one cares,” he says. “If it goes wrong, it's front-page news.”

The stakes are high. The CIA has briefed him about mink thieves that can appraise a coat by looking at the stripes. Lisa Dawn, a longtime coat-check collaborator, recalls a disaster a few years back when a coat went missing with a gentleman's rental-car key in the pocket. They had to give the guy cab fare and get a locksmith to open the car so they could drive it out to the hotel in Crystal City.

On Tuesday night Hulcher takes a breather with a salami-and-swiss sandwich and a cigarette in the utility hall behind the VIP room, and the strange reality of the job sets in.

At the end of the night, the packed balls empty out and some of the lines get long again — but that's OK. It's how you know Obama was here. S