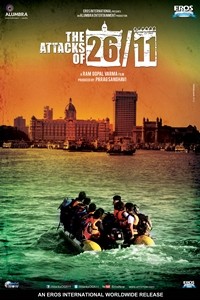 Mumbai is known as the commercial capital of India and one if it's most bustling cities. A sprawling metropolis that is home to over 20 million people, it is also known as a resilient city. The irony is that over the past century, the city has not seen as much natural adversity as it has witnessed scores of man driven assaults and terrorist attacks.

The audacious terrorist attacks which happened in Mumbai on Nov 28th, 2008, jolted the city's spirit like never before.

It wasn't a mere terror attack, it was akin to war. Just 10 men, affiliated to a Pakistan based terror outfit Lashkar-e-Toiba, walked into Mumbai and fanned out to several iconic locations in the city. Holding up each location in teams of two, the ten terrorists attacked and held siege at Chhatrapati Shivaji Bus Terminus, Leopold Café, Taj and Oberoi hotels, Cama hospital and Nariman house.

The terrorists, motivated and programmed to mercilessly kill anyone in their line of fire, went about virtually unconfronted because the local police were not equipped enough to match their sophisticated arms and ammunitions. The terrorists killing spree ended up taking the lives of 166 people and wounded at least 238 more.

"The Attacks of 26/11" is a cinematic representation of the events that unfolded on that fateful day, resulting in one of the worst terrorist attacks ever in the history of India.