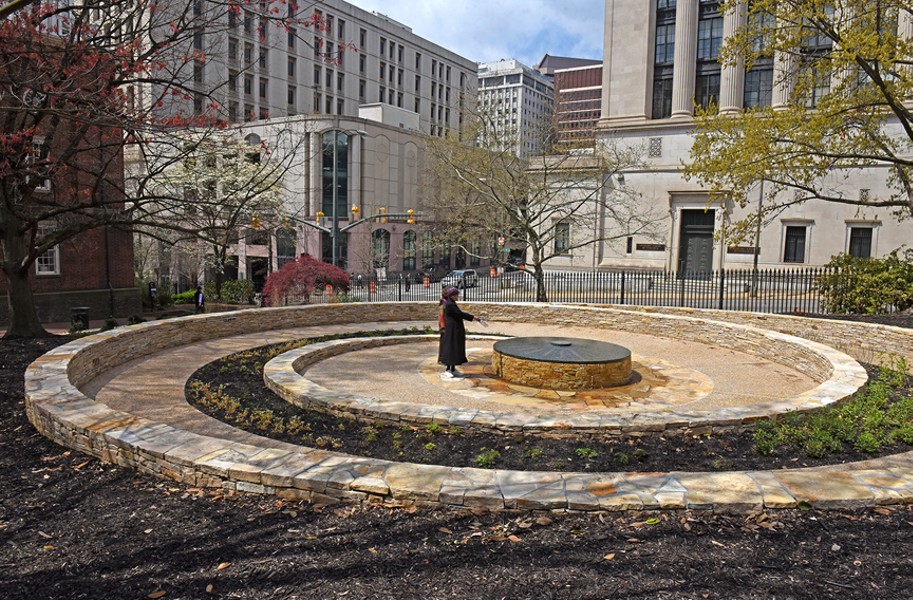 Scott Elmquist “Mantle” on Capitol Square cost $675,000 in mostly private donations and features a meditation area and small infinity pool in the center of a large spiral walkway.

There was a crowded public ceremony downtown last week to dedicate Richmond's newest monument. A Virginia Indian tribute, "Mantle" is a spiral walkway built into a gently sloping hillside near the Bell Tower on the southwest corner of the Capitol Square grounds.

"This monument honors the winding path of our native Virginians who have called this land home for thousands of years," Gov. Ralph Northam said at the ceremony. "It acknowledges the suffering and mistreatment of native Virginians, as well as their courage and resilience, giving the tribes a place of honor and recognizing their continuing importance in the fabric of Virginia."

It's taken roughly nine years to arrive and comes at a time when a half-dozen more Virginia tribes have received federal recognition, which allows access to funding from the Department of the Interior. Also in the news lately, the Pamunkey Tribe in King William County is seeking to build a $700 million resort and casino, vigorously opposed by the mid-Atlantic casino market.

All of this follows centuries of perseverance by Virginia tribes, who've dealt with obstacles to federal recognition including counties where records burned and the Virginia Racial Integrity Act of 1924, which labeled Native Americans "colored."

The monument idea, originally proposed by Ken Adams, chief of the Upper Mattaponi Tribe, was shepherded by Delegate Chris Peace, R-Hanover, who crafted a resolution in the General Assembly that prompted the formation of the Virginia Indian Commemorative Commission.

Although a Virginia artist and Pamunkey Indian, Kevin Brown, was a finalist, the commission for the project went unanimously to a Native American artist, Alan Michelson from New York. The project, which cost $675,000, was financed mostly with private donations by the commission and the Virginia Capitol Foundation. The Commonwealth retains the rights to the artwork.

"Obviously, it was a serious matter to consider when we chose not to select a Native American from Virginia," Peace says. "It was just something visceral almost, where we connected spiritually with the design almost instantly." He adds that the commission did include the other finalist as a formal consultant.

Michelson is a Mohawk member of Six Nations of the Grand River. He worked with Commonwealth Architects and Daniel and Co. builders to finish the piece. And he spoke with Style Weekly a few days before the dedication.

Style Weekly: Were you familiar with the Virginia tribes?

Michelson: I've made work that deals with indigenous subjects and issues. … I tend to look at subjects through the lens of sites and their histories. Often the histories are not apparent, so research is a big part of it.

I was in a biennale in 1992 in London and Madrid and had researched the launching place from which the Virginia colonists set out from London, the Virginia Company. It was an obscure site that hadn't been marked at that point. So I did a performance and installation in a lighthouse on the site. Ten years later, I was back in London and wanted to see the John White watercolors, the first representations of native peoples by an English person, dating from the 1580s. So I went to the British Museum and saw that, it was amazing. So to that extent I was familiar with the [Virginia] history. But not being from there, I naturally came as a bit of an outsider.

What was the idea behind the concept?

What prompted some of the design was a historic artifact in the Ashmolean Museum at Oxford. They have Powhatan's mantle in their collection, which is thought to be a gift from the chief generally known as Powhatan to King James in the early 1600s. So the artifact is a large mantle, sort of a cloak sewn of deerskins with 34 circular shell-embroidered discs on it. … I got interested in these discs that are sewn in spirals and are thought to represent the confederacy of tribes that existed that the time. I thought it was interesting that it was a cloak and a map, in a sense. The title [of the monument] refers both to the Earth and to a mantle passed down of responsibility.

From the start I wanted to do something of the land itself, historically and conceptually … [and] to reflect the positive aspects of indigenous culture and the act of presence and survival of Virginia's Indian tribes despite all the difficult history. … The idea of a spiral, too, has to do with a sense of time in indigenous cultures. When you're on it, you can look back and forward at the same time. The site itself was a slope, so I wanted to work with what was there. It is a bit of an earthwork, which ties in with Native American mounds.

[On the engraved infinity pool fountain in the center that features the names of the tribes and associated rivers]: I consulted with Karenne Wood, a Monacan Indian and expert in Virginia Indian history. She explained that the fall line [of the James] was the natural border between the three major tribal groups in their original territories. We tried to arrange the names in a way that they would form a map on a circle, radiating out. Local river stone is in the stone aggregate path and all the plants are indigenous.

Walking the spiral sets you in motion, and puts you at a different relationship to your surroundings, toward a center that is active. I wanted this to be an experiential monument and inclusive. It invites you to take a walk and there are places to sit and just take a moment. … It's not the sort of hero-worship-type, traditional monument.