The Art of Narcissism 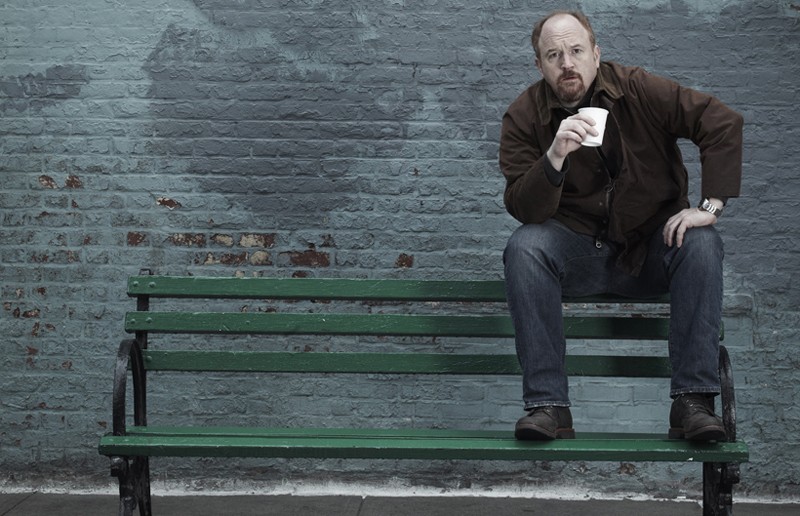 It's been said many times that anger is the root of comedy.

If there was ever a comedian who exemplified this notion, it's 44-year old balding redhead, Louis C.K., who drew heavy applause and steady laughs from the standing room only crowd at the 1,800 seat Carpenter Center on Thursday night.

Dressed entirely in black, with his standard T-shirt and blue sneakers, the tall and burly comedian didn't waste time poking a little fun at "the South."

"You know if it's got a name. ... It's fucked up," he said, before he quickly observed that audience members' beers were sitting on the stage at an "opera house." He then told a story about a grossly overweight lady he saw earlier in the day who had remarked in passing that she "had to get herself a little man."

"I guess everything is little to her," he quipped. "Like, 'I've got to get a little tank.'"

More telling, however, was C.K.'s early reaction to a female fan near the front who shouted, "I love you" at the beginning of his hour-plus set.

"Just shut the fuck up," he rebuked her. "Your love has no value to me." Then he compared her to "a mouse shitting in his cereal."

Here we have the essence of the misanthrope Louis C.K.--part-George Carlin, a huge influence, and part neurotic Woody Allen -- repeatedly reminding all who would listen that at his core he is "a selfish asshole." The reason for his popularity: C.K. is a naturally funny storyteller and gifted comedy writer, bludgeoning the audience with his honesty, making people feel better about their own worst impulses.

Just when you think his brooding negativity is becoming uncomfortable, C.K. spins it into comic gold. "They're about 1,500 of you here, right?" he asked early on. "That means, statistically, probably at least one of you will die before Christmas and ruin your family's Christmas."

The point of the morose bit: Death is not about you. You're history. If it were up to him, C.K. would put your ashes in the desk drawer where he stashes his old useless VCR remote controls to mine them for batteries, where he keeps his own beloved dog's ashes. It's a "Let the dead bury the dead" kind of thing.

From his cleverly worded standup, one can tell this guy has years of experience as a comedy writer, most notably for "Late Night with Conan O'Brien" and "The Chris Rock Show"--where he won an Emmy. But his assertive stage presence may now be more shaped by starring, directing and producing his own TV shows. The short-lived 2006 HBO series "Lucky Louie" and his current FX production "Louie" try hard to subvert the old sitcom formula.

C.K. has been called a "comic's comic," mainly because of his fearlessness in examining himself. But there is also an unexpected tenderness that occasionally creeps out, however much he tries to hide it. Raised as a small Mexican boy (his father is a native of Mexico and met his mother at Harvard), C.K. is the type who can seem so painfully honest that he needs protecting. The type that projects a tough shell to the outside world but would crumble at the slightest provocation -- or scary camping trip, as he describes in one bit. He walks this tightrope, the brash asshole and thin-skinned artiste, constantly in his shows.

Much of his best material centers around his family: He is a divorced father of two girls, ages six and nine, and he summed parenthood up with one word: "boredom."

"The Clifford the Dog series takes 50 books to say one thing: Look how big this dog is," he joked, before wishing there was a Clifford installment about the dog crushing a police officer and being sent to the electric chair.

Another bit about anti-science people who try to defend their disbelief in the theory of evolution also drew wide laughs. "Those people do tend to look stupid," C.K. said, imitating them. "I ain't no monkey . . . my daaaaady ain't no monkey!!"

But always C.K. would come back to his base cynicism. Many modern comedians either make fun of other people or themselves. C.K. is good at both.

If I had one complaint, however, it's the pacing of his show. Unlike legendary comedians, C.K. does not build to better material--in fact, he seemed to blow his load early at this show, making the ending bit and encore feel anticlimactic. His big theater show really feels much like a small club show, where he is just randomly telling stories for the allotted time, then a quick "get home safe everybody."

C.K. said he fully expects his current TV show to be cancelled within a couple of years, and for him to alienate everyone he knows, then become grossly overweight, to which he looked forward.