The Apple Doesn’t Fall Far from the Oak

Barbecue and cider are the stars at Oak & Apple in Shockoe Bottom. 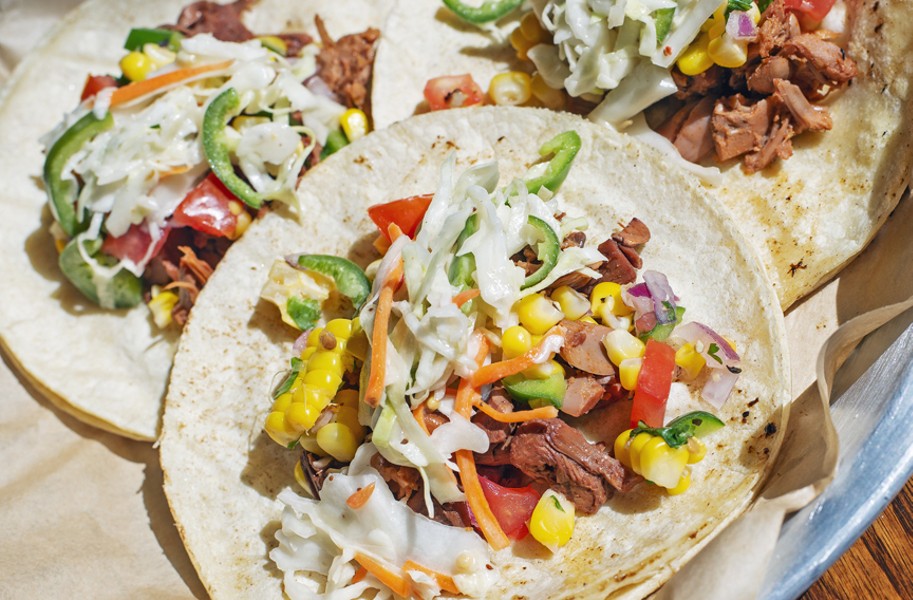 Let me begin with how satisfying it is to support a woman-run barbecue pit.

Oak & Apple, the latest restaurant in the stable of Historical Restaurant Concepts, the group that owns Station 2 and Postbellum, was conceived by its partners as a gathering place for the ever-expanding Shockoe Bottom neighborhood.

There's a spacious patio — not to mention a designated pet-friendly area for diners who want to chow down with their hounds — that invites patrons to linger with a view of the constant parade of humanity along East Main Street, set to a '90s soundtrack.

But back to the most intriguing aspect of this new barbecue spot. A five-year veteran of Postbellum, pit mistress Kat Nielsen is a 28-year-old Virginia Beach native who graduated from Virginia Commonwealth University with a degree in classical music performance. Her fascination with barbecue was ignited in high school after her father, a chef and pitmaster, brought home a Big Green Egg, a combination grill and smoker. Once the two began playing around with it, they got serious quickly, entering barbecue competitions and winning prizes in amateur and professional contests.

Fast forward to 2019 and Historical Restaurant Concepts decides it needs to bring barbecue to the city's East End. When it came time to name the place, it made sense to allude to the meat-heavy menu's source of flavor: the oak wood used to smoke those meats.

The other half of the Oak & Apple name is a nod to its extensive cider offerings, both domestic and European.

As for the menu, it's separated by whatever fits your mood. There are nine options from Nielsen's smoker, all available as sandwiches or a la carte, and nine from chef Kevin Church, including pork spareribs and jackfruit tacos, along with five sandwiches. Keeping it hyper-local, the bread for the sandwiches and desserts is made right next door at Root Stock Provisions, Historical Restaurant Concepts' market.

If you can discern a barbecue joint's bona fides by eating its brisket ($13 per half-pound), rest assured Oak & Apple is the real deal. Nielsen's brisket is stellar, employing a dry rub so flavorful that we ate half of it as is, despite the vast offering of house-made sauces — hot sauce, apple barbecue sauce, Carolina Gold mustard, smokin' hot sauce and Alabama white sauce. Speaking of the heat of some of those sauces, the corn fritters ($7), served with sambal jelly and pimento cheese, offer a fine counterpoint should your mouth need cooling down.

A barbecue joint that doesn't forget fish fanciers may be a rarity, but even omnivores can get behind whole Carolina mountain trout ($15) which acquires a satisfying depth of flavor thanks to time spent in the smoker. Hitting on multiple pleasure points, lettuce wraps ($10), fat with pulled organic chicken, hoisin barbecue sauce, peanuts, shredded carrots, sambal jelly and jalapeños, marry lightness with an abundance of contrasting textures.

As for the barbecue bahn mi ($10), the sliced ham and pulled pork shine but this diner would have liked a bit more crust to the baguette to stand up to pig two ways. Espelette wings ($10), accompanied by hoisin barbecue sauce, are meaty, the skin crisped to crackling perfection. Sides ($3) such as crunchy, sweet apple slaw and tea-braised collards provide worthy complements to savory meats, while the dessert star, Dutch apple pie ($6), boasts as much almond streusel and bourbon pecans as actual apples.

On my visits, service shone with staff going above and beyond to make us happy. After asking for more napkins, we notice extras at the ready in the sauce carton. Our server still insists, "I'm OCD, so I'll get you more anyway." Good thing, too, because we needed them.

On a swelteringly hot patio visit, my companion asks about iced coffee — not on the menu — and is immediately assured staffers will make one with Rostov's coffee. Delivering the icy beverage, the server brings a bowl of sweeteners, plus a small plastic container of simple syrup from Root Stock Provisions, knowing it will mix better in a cold beverage. Those types of niceties add up over the course of a visit.

Bottom line: There's good eating at Oak & Apple thanks to Church and Nielsen's approachable and solid menu. But just for the record, if you should spot the pit mistress in front of the Old Hickory smoker, it's not likely she'll answer to anything other than Big Daddy Kat.

You can't say you weren't warned.