Already retired in his mid-30s, the trust-fund kid spends most of his time in a recreational daze, wandering the city with his equally aimless friends in search of thrills. Tonight, he’s invited a young waitress aboard his sailboat to share a bottle of whiskey. We feel a dull spark of connection between them, if only through the casually offensive jokes they employ in every conversation. We watch as they sit below deck, half-undressed, smoking pot out of a tiny glass pipe. A first kiss feels imminent.

Suddenly, the woman arches her back in a violent epileptic seizure, her eyes rolling back in her head. Oddly the man doesn’t move to help, or even look mildly concerned. Instead he just sits and watches, chomping his ice while the long, torturous moment unfolds. We never see what happens next. Instead the director cuts to the couple shivering while returning to shore on a little skiff motoring against the cold, black night.

Welcome to “The Comedy,” a polarizing film by Richmond writer and director Rick Alverson that marked his breakthrough to wider national recognition in 2012. Today, he's not only one of the most important and promising artists to watch in Richmond, but he's one of the most uncompromising directors of his generation.

Like many of his films, "The Comedy," starring comedian Tim Heidecker in a dramatic role, was financed with help from Indiana-based music label Jagjaguwar, founded in Charlottesville in the mid-’90s. Alverson has released nine albums on the label with folk bands Drunk and Spokane, the last one coming in 2007. 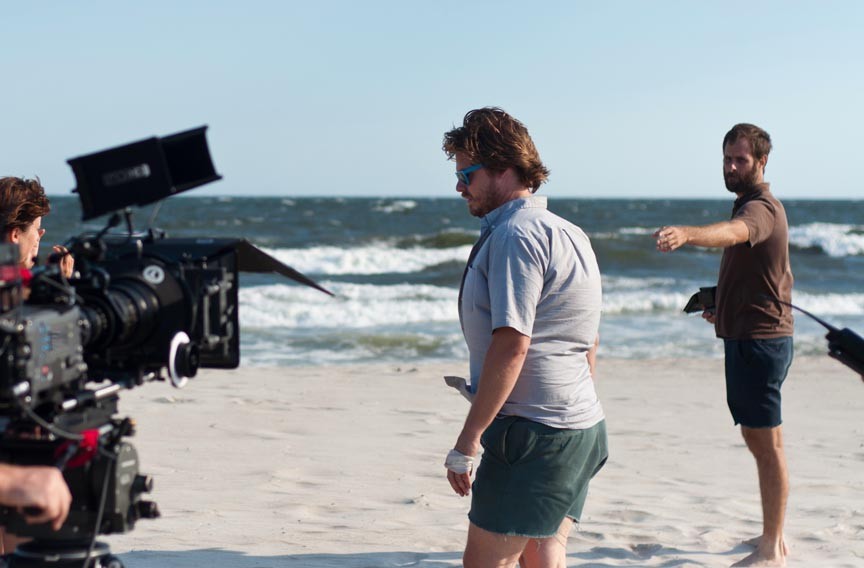 Label founder Darius Van Arman has executive produced all four of Alverson’s movies: “The Builder” (2010) partly shot in Richmond, “New Jerusalem” (2011), which was shot entirely in Richmond and Chesterfield County, “The Comedy” and the forthcoming “Entertainment,” already picked up for distribution by Magnolia Pictures, a promising trajectory for the filmmaker.


“He challenges the audience of his movies unlike any other contemporary director,” Van Arman points out. “You can’t watch and remain a bystander.”

While making the festival rounds, “The Comedy” had critics praising its singular vision and others slamming its lack of moral indignation for its protagonist. Industry types walked out of the movie's Sundance screenings — not that unusual — likely hastened by the lack of proper attention to commercial viability. A Chicago Sun critic wrote: “The strength of this film is that we have no idea where it will go. The problem is that we might not care where this film will go. … Nevertheless, the movie did get me to think, and that is a success and almost a redemption of its own.”

There’s no “almost” to anything this 44-year-old Richmonder does. Alverson is a bold and driven filmmaker who above all else wants his audience to think. Like other rising American filmmakers such as the Safdie brothers (“Heaven Knows What”) or Kelly Reichardt (“Old Joy”), he aims to revitalize cinema as an art form by focusing on its formal elements - lighting, scoring, editing — as well as disrupting pre-conditioned audience responses. In interviews, he often explains that by making the audience uncomfortable, he hopes to force a more active and critical viewing experience.

Hollywood types view him as a talented cult filmmaker. But his challenging work is earning the respect of other directors and well-known actors as well. Veterans John C. Reilly (“Boogie Nights”) and Michael Cera (“Juno”) have parts in his latest. Oscar-nominated cinematographer Lorenzo Hagerman shot Alverson’s new film using Russian anamorphic lenses from the 1950s to provide a more grainy texture.

The forthcoming “Entertainment” is a bleak and surreal road movie through the Mojave Desert. It follows the touring life of a small-time, aging comedian played by real-life, small-time aging comedian Gregg Turkington, aka Neil Hamburger. It is scheduled to open Nov. 13 in limited theatrical release and On Demand, with a pre-premiere of sorts at the Byrd Theatre on Nov. 8 as a fundraiser for the planned Bijou Film Center.

In addition to promoting his new film around the world, Alverson is working on five other projects simultaneously. Foremost among them, he’s casting a long-gestating film set in the Reconstruction era about the birth of the Ku Klux Klan titled “The Well-Dressed Man.” He calls it his “passion film” and a form of rebuttal to D.W. Griffith’s infamous “Birth of a Nation.” It’s been in development for six years. There’s also the tentatively titled “Modern Age,” about the fall of a popular American lobotomist, which will star in-demand young actor Tye Sheridan, who appears in “Entertainment” as well as films by Terrence Malick, Jeff Nichols and the upcoming big-budget “X-Men: Apocalypse." Alverson adds that he’s also writing a capstone to the trilogy begun with “The Comedy,” as well as a psychological thriller titled “The Couple” about a woman whose behavior is dependent on a dog’s actions. 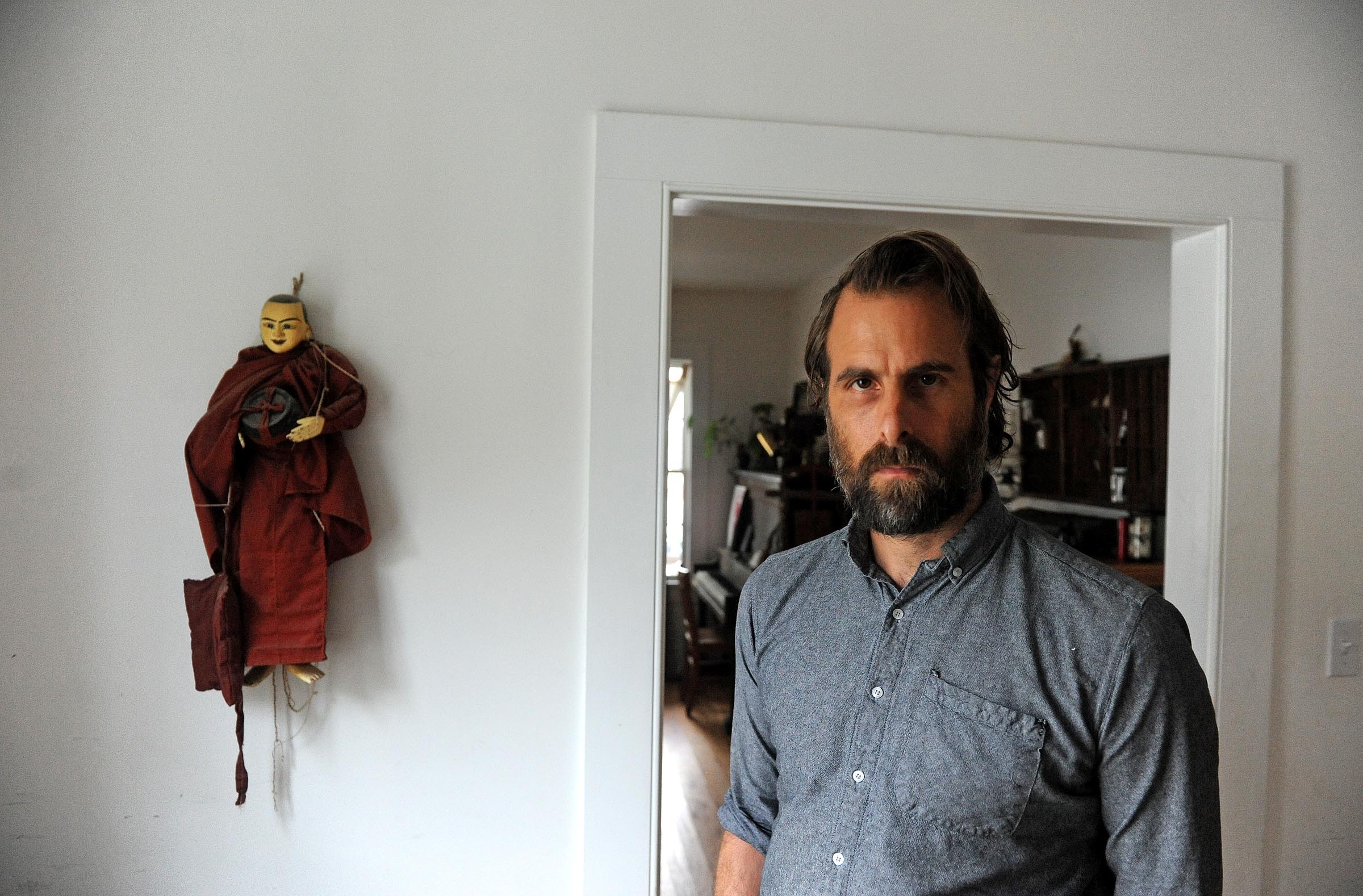 On a wet fall morning at Lamplighter Coffee’s Addison Street shop, Alverson sits across from me looking like a hungry carpenter who also teaches graduate classes at the local art school. His dark gaze can be a little unsettling, not unlike a black-and-white image from a rusted Civil War-era locket. In most photos I've seen of him, Alverson appears to be brooding, or wearing a dour expression like one of his typical characters. But this morning I discover that he’s a natural conversationalist, his features growing livelier with each idea he expresses.

Half-jokingly, I suggest that maybe this feature story could somehow formally mirror his aesthetic.

“And how would that look?” he asks. “My aesthetic in language is Beckett. Nameless nobodies crawling through the dirt questioning what their limbs are for … That should just about sum it up.”

Samuel Beckett. Thomas Bernard. Robert Creeley, for whom Alverson traveled to Maine to record one of his last poetry readings. These were the literary figures who first intrigued him with their theories on language and grappling over form and content. In his movies, Alverson denies the “narcotic” comforts of predictable film narrative, namely a protagonist who engages increasingly dangerous hurdles and ultimately changes in some fundamental way by the end. Instead in an Alverson film, the beginnings and endings seem almost arbitrary, more like life. He has the ability to look at any environment with the fresh eyes of an outsider, which might stem from his itinerant childhood.

Alverson was born in Spokane, Washington, descended from German, Italian and Swedish ancestors. His father worked with Bechtel, an infrastructure energy company similar to Halliburton and would move the family every few years to larger projects that often were bad for the environment, he says. Alberta, Canada. Green River, Wyoming. Midland, Michigan. Frederick, Maryland.

All the moving around to different schools made Alverson profoundly introverted, nearly “crippled," he recalls. "I barely spoke and that lasted into my early 20s."

When the family was living in northern Canada, his mother became president of a skating club in Fort McMurray where her young son accompanied her daily. By the time he was 7, Alverson was into competitive figure skating. The sport taught him discipline as he prepared for the inevitable dream of the Olympics — which he later found to be an unlikely parallel to the “postponed utopia of heaven” in his Catholic household that still used the antiquated Baltimore catechism, he explains.

“I didn’t go to lunches or dances or gym classes,” he says, adding that he spent six hours a day in the skating rink from ages 10 through 19. “More than anything else, there weren’t many other male skaters. I spent most of the time alone in the locker room. On the other side of the rink there are 50 young ladies. To say that I was confronted by questions about masculine identity and gender — being a male figure skater in the 1980s — that was a given.”

Like so many others, it was at the movie theater where Alverson found an escape from society's shortcomings. He still can recall, as a young man, being entranced by those early Steven Spielberg and George Lucas blockbusters that reshaped Hollywood.

“The immersion that happens in the theater, the transportive nature of it, was disorienting and intoxicating,” he explains. He still remembers walking out of “Raiders of the Lost Ark” and feeling that his own face had transformed to become Harrison Ford’s. Even early on, he says he was frightened by the medium’s power. That still hasn’t changed.

By high school, his family had settled in suburban Norristown, Pennsylvania, birthplace of stop-motion animators, the Quay brothers. Alverson was “the artsy kid” at school and had a lucrative side business painting the backs of jean jackets with whatever album cover was in vogue.

Around age 19, he was visiting his older sister in New York when he discovered world cinema by the likes of Tarkovsky, Bergman, Herzog and Bresson at Film Forum and Anthology Film Archives.

“Seeing Andrei Tarkovsky’s ‘Stalker,’ because of the lack of information and ambiguities, it creates a restlessness in the viewer,” Alverson says. “Once you get over a threshold it becomes revelatory and you realize there’s something going on with your relationship to this thing. That planted a seed.”

In 1991, he attended New York University’s film program as a part-time student, where he learned production basics for a year. It was during this period that he met Irish-American writer, Colm O’Leary, in a neighborhood cafe and the two bonded. O’Leary later became his writing partner and the magnetic lead actor in his first two films. For an inexperienced actor, he’s shockingly good. 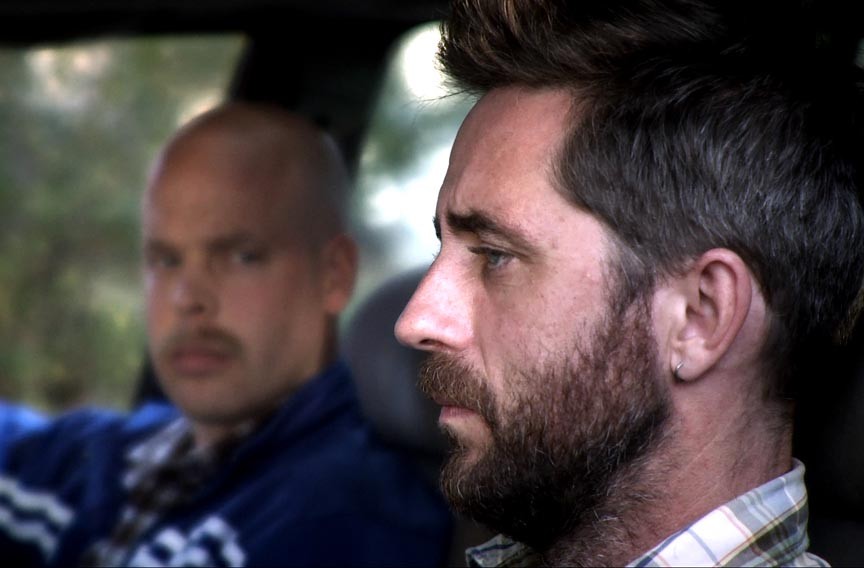 Back then, Alverson was writing a lot of language poetry — “very dense, amazing, microprose pieces,” O’Leary tells me. “You couldn’t enter them through reason or rationality. You had to enter the cadence of it, its own internal logic. It wasn’t going to explain itself to you. You had to enter it on its own terms.”

Still in his late teens, Alverson was self-educated and had found his artistic inspirations on his own, not through any institutions, O’Leary recalls. He believes the most revealing thing about his friend's champion figure-skating [past] is how driven it made him -- which carries over to his work ethic today.

“Skating you fall a lot and get back up. He’s tough, he can take his lumps,” O’Leary says. “But his ambitions have always been artistic ones. They were never about success, but rather about life.”