With not a single wasted shot, “Parasite” is a must-see thriller loaded with potent symbolism. 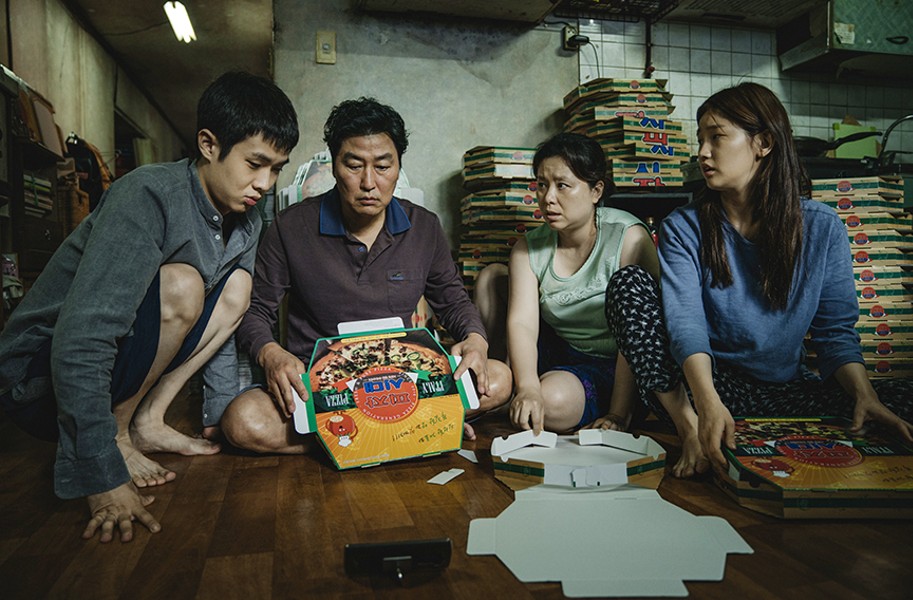 Watching the film, it feels as if Bong, the celebrated South Korean director of “The Host” and “Snowpiercer,” among others, knows that he’s landed on a premise that could exorcize the anti-capitalist themes that continue to obsess him, and is determined not to waste it. “Parasite” is a culmination, the result of a stunning formalist doing his homework.

There are no wasted shots in “Parasite,” no incidental textures. Every image is a metaphor, every line of dialogue a joke or svelte bit of foreshadowing. Seriously. When a rich character complains of his driver’s smell, he’s simultaneously affirming Bong’s classist satire and helping to subliminally prepare the audience for the film’s ghoulish climax. When a light flickers, it isn’t merely flickering. When a boy shoots a toy bow and arrow, he’s inadvertently endorsing the genocide that fueled the formation of America, and, by extension, global wealth at large, while also alluding to said ghoulish climax.

“Parasite” is a tale of two families, a have-not and a have, respectively. The have-nots live — in another symbolically rich detail that Bong physicalizes immaculately — literally under society in a cramped basement dwelling. The film’s opening image reveals a street from this basement’s lowly vantage point, a composition that conjures a sense of class alienation and estrangement. These are subterranean people constantly looking up to mainstream life, and Bong makes this point much more artfully than Jordan Peele did in the similarly themed “Us.”

The young adult children of this poor family of four, sister Ki-jung (Park So-dam) and brother Ki-woo (Choi Woo-shik), are first seen wandering the apartment with their phones held up to the ceiling, in an effort to find free Wi-Fi. This detail is another testament to Bong’s efficiency, as he immediately seizes on the notion of how difficult it is for the down-and-out to break back into society once they’ve fallen. Who can get a job in the 21st century without internet? Bong stages this scene as a joke, as class commentary, and as an introductory interlude that illustrates this family’s inventiveness.

Then a break comes, which Ki-woo seizes on. A friend recommends Ki-woo as an English tutor for Da-hye (Jung Ziso), the teenage daughter of the affluent Park family. Ki-woo doesn’t have college credentials because he can’t afford college (Bong really has thought of every topical detail), but Ki-jung, a lapsed art major, forges the right credentials for him. Ki-woo is soon in the Park house, and he perpetuates an elaborate chain scheme in which Ki-jung and their parents, Ki-taek (Song kang-ho) and Chung-sook (Hye-jin Jang), also get jobs, at the expense of other proletarian people.

The various cons that this family perpetuates in order to get into the Park household are too delicious to spoil, and Bong invites us to revel in their cleverness while acknowledging that these people are hurting other struggling workers. This dog-eat-dog irony gives “Parasite” a thorniness that was lacking in Bong’s other recent parables, “Snowpiercer” and “Okja,” in which the wealthy were monstrous cartoons and the poor were saintly. And this irony establishes the foundation for an audacious twist, in which others are revealed to be lurking in the periphery of these contrasting families, living an even more subterranean existence than the desperate protagonists.

Rather than flattering the middle class via a typical vilification of the one percent, Bong builds a kind of caste-centric ant farm in which everything is relative, in which everyone believes his or herself to be a hero, allowing everyone to screw others over with impunity. That, of course, is the essence of capitalism, which depends on the complicity of the middle as well as the upper classes. Bong complicates things further by rendering the Park family attractive and appealing, if blinkered by their wealth and the comfort of their home, which suggests a chic glass dollhouse. The house is also on top of a long flight of stairs winding up a hill, which visually contrasts with the lowness of the basement dwelling.

Easily Bong’s best film in ages, it’s easy to see why “Parasite” has been so ecstatically reviewed, as it’s a resonant and supple piece of genre activism, with luxurious tracking shots and visual rhymes that seep into one’s subconscious. If I feel that the film is a bit overrated, it’s because Bong’s efficiency has its price. To repeat: There are no incidental textures, and I missed the looseness of Bong’s extraordinary “Memories of Murder.” And the third act of “Parasite,” like many of Bong’s third acts before it, is a cluttered hodgepodge of incidents. At a certain juncture, you want to say to Bong “I get the point.”

All that said, “Parasite” is a must-see. As flaws go, overambition is one of the more forgivable, unless it’s at someone else’s expense.