The Analyst: How VCU's Will Wade Uses Discipline and Data to Keep Ram Ball Rolling 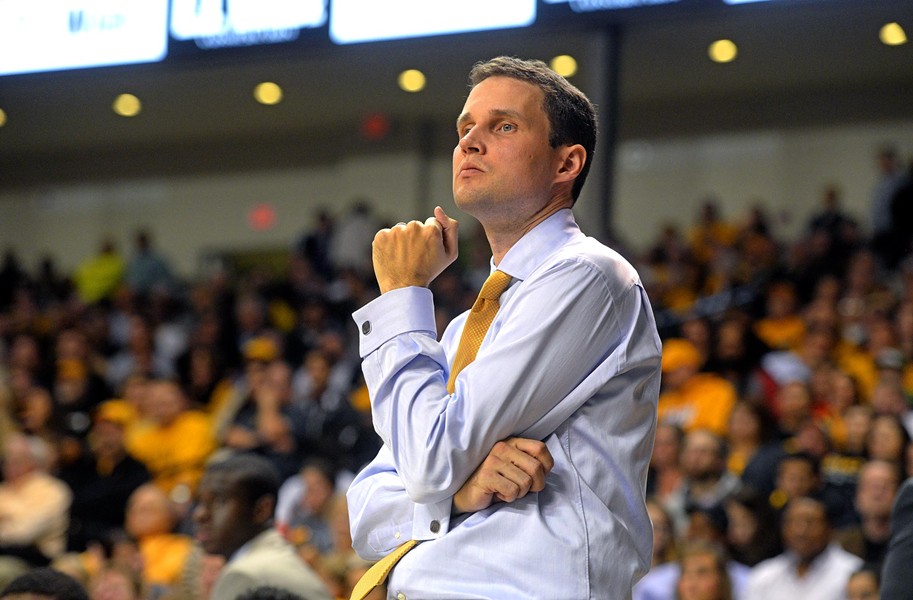 It’s Friday night in New York’s Madison Square Garden. For basketball fans this is hallowed ground, and Virginia Commonwealth University is facing Duke. It’s one of the most winning franchises in all of sports which also makes it one of the most despised.

The Blue Devils are headed by hoops royalty: Mike Krzyzewski, a 68-year-old coach and inevitable hall of famer who leads America’s Olympic dream team when not dominating college basketball year after year.

The Rams are here with their new coach, Will Wade, a fresh-faced 33-year-old and someone who, as television announcers note during a previous game, might still get carded at lunch.

It’s not even fair to call this a matchup of the wily veteran versus the relatively unknown young gun. This is one of the greatest coaches in sports history looking down at a guy with only two years of head coaching under his belt at the University of Tennessee at Chattanooga.

Wade’s biggest accomplishment so far may be getting hired by former VCU coach Shaka Smart as an assistant in charge of the team’s disruptive full-court press — an aggressive style of play widely known as “havoc” — and joining that team’s magical Final Four run in 2011, which put a national shine on the university.

Any game boils down to players on the court, and in that respect, VCU’s tough team always has a fighting chance. One of its greatest wins came by knocking Duke out of the first round of the NCAA tournament in 2007. But now, its former celebrity coach is gone, carried aloft to the University of Texas and one of the richest athletic programs in the country.

In his place stands the lanky Wade with his high-school history teacher vibe, long arms and narrow shoulders. You might assume he’s a former baller, but he’s not. A native of suburban Nashville, Tennessee, Wade is an analytics junkie who worked his way up the basketball ladder starting as a student manager at Clemson University. 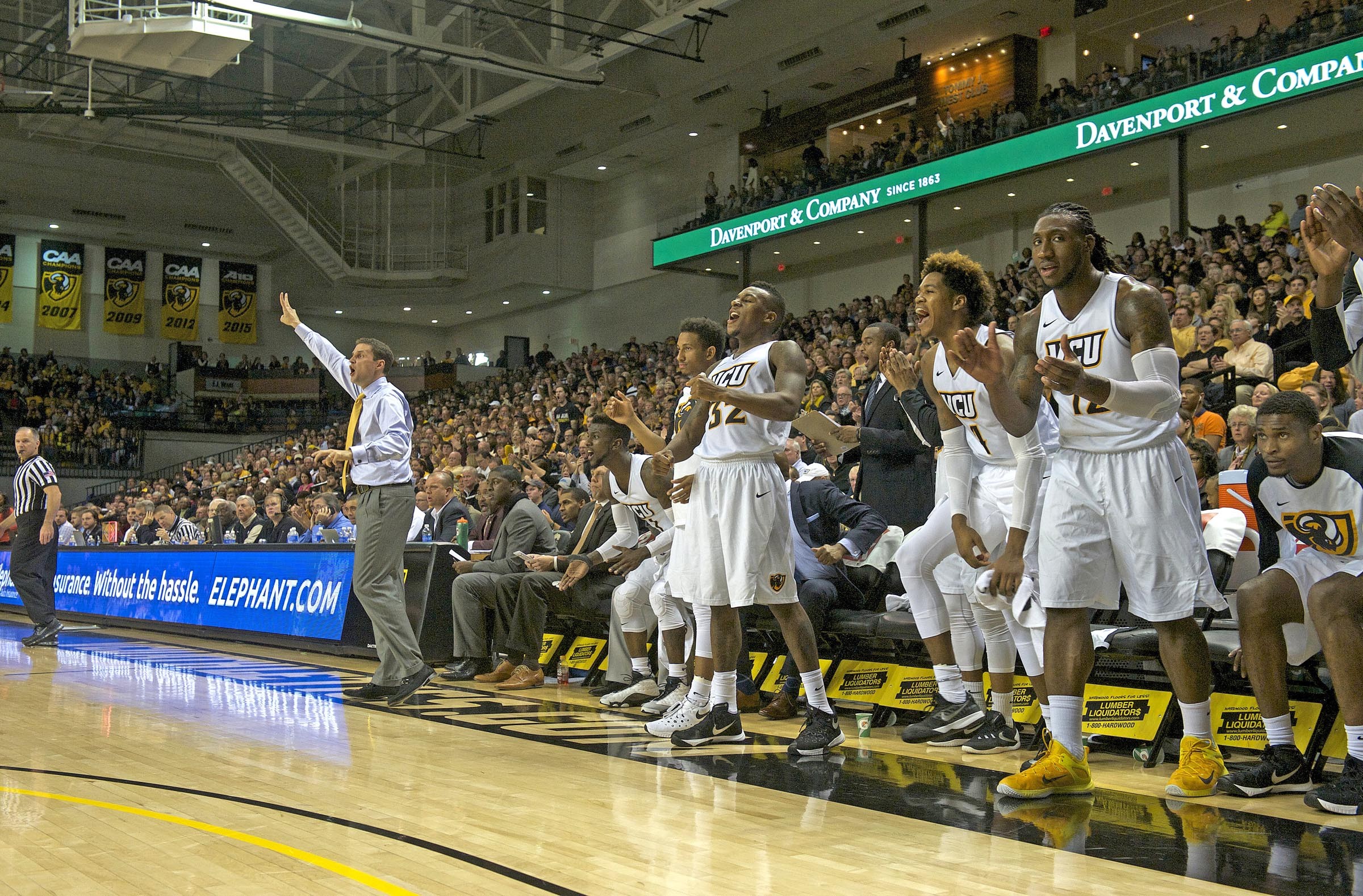 Tonight, pacing beneath the bright lights of Madison Square Garden, Wade has the excited look of a wide-eyed fan, lost in the action of a fast-tempo game. He is usually clapping and yelling to his players, offering encouragement or making a point with a referee. Rarely does he take a seat.

“He’s got that young baby face and he’s cool,” senior guard Melvin Johnson says. “But regardless of his personality, he’s a savvy, hard-nosed guy. … He’s not trying to become the next Shaka, he’s doing a great job of just being himself.”

“It’s funny. The style of play is similar, havoc is the same, but Will’s just a very different person than Shaka,” McLaughlin says. “He doesn’t want to be a celebrity and really shuns away from that. Shaka could’ve run for governor and gotten it.”

The Rams hang tight with Duke much of the game, but begin missing shots in the second half and the Blue Devils escape with a victory. Coach K. and Wade exchange smiles and talk long after the horn sounds. Asked later what was shared, Wade says he prefers to keep it between them.

Several coaches have used the VCU job as a stepping-stone to higher-profile programs. But administrators are betting that Wade will not only continue the program’s winning ways but also stick around a while. They’re paying him a million dollars a year for the next five years to make sure he’s comfortable — not to mention a new $25 million practice facility, paid mostly with private funds raised during a lengthy campaign, which opened in the fall.

“Havoc still lives here,” McLaughlin says without hesitation — a common refrain that Wade makes sure to stress on his first big media day. Those hot-selling T-shirts and other merchandising exploits won’t be going away, that much is clear.

For his players, Coach Wade is a new mentor in their lives, a father figure of sorts for a tightknit group still reeling from the spring departure of its famous coach and close friend. It’s a responsibility Wade takes with the utmost seriousness — traveling to get to know many of the newer players, their families and inner circles as best he can.

This is a group of young men with their own backstories and complex personal hurdles, which their coach strives to help them manage and improve as they ready themselves for the real world.

In other words: no pressure. No pressure at all. 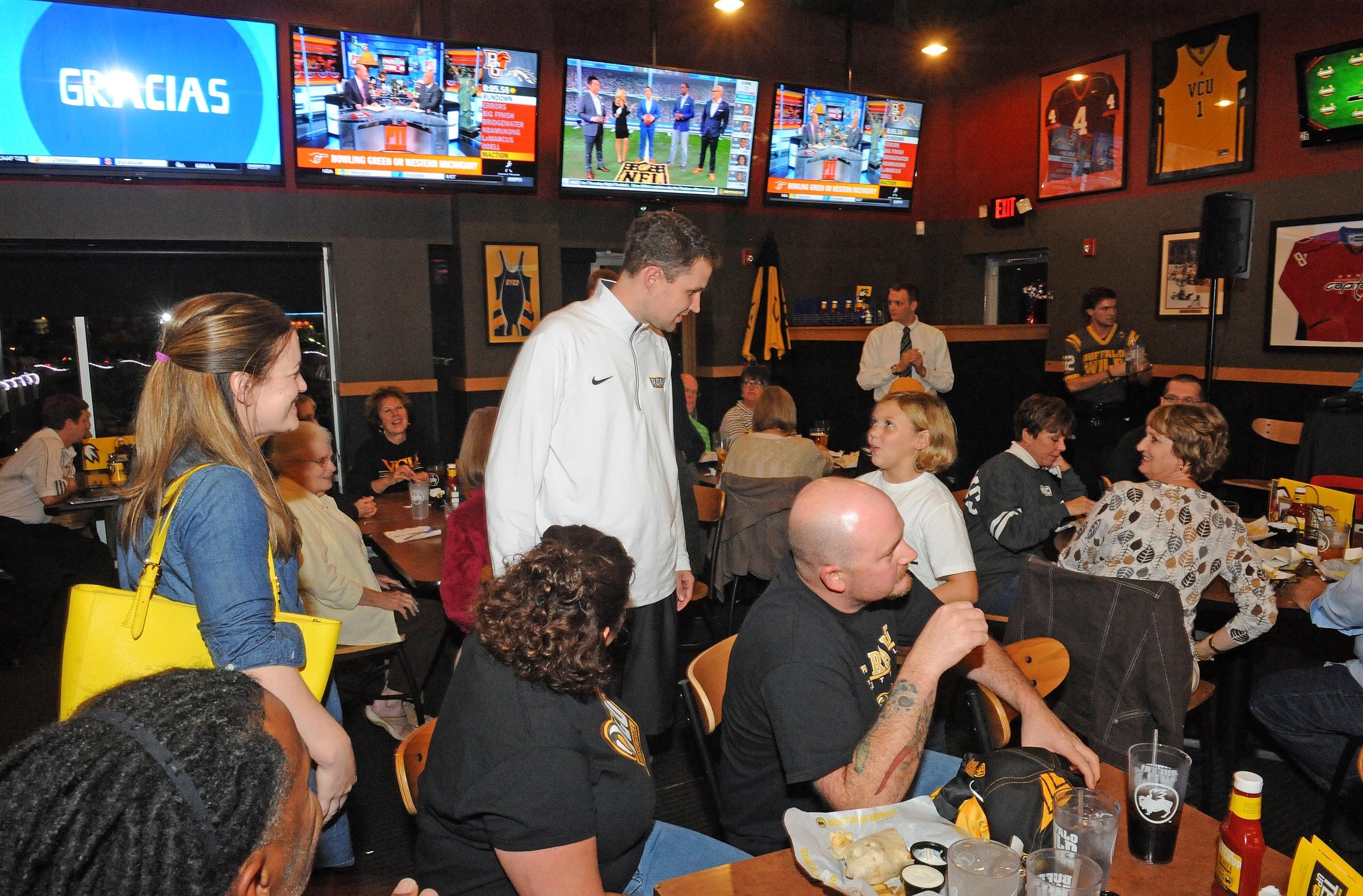 A week before the Duke game, the young coach wades through a sea of older fans and boosters gathered at the Buffalo Wild Wings in Short Pump.

He’s all smiles, shaking hands and giving high-fives before heading to the podium to join radio personality Greg Burton for the first episode of his coach’s show, which airs on ESPN 950. For the next hour they talk about players, recruiting, rule changes and games ahead while the packed room occasionally breaks into applause between munching on wings and celery.

McLaughlin watches from the back of the room like a proud parent. He can still recall his first day at VCU back in 2012, walking into the basketball offices at 5:30 a.m. in the middle of August.

“Will was already there,” McLaughlin says. “I stayed all day going to meetings, then left late that night, walked by the offices and he’s still there. To me, it’s things like that which stand out.”

Most days, Wade wakes up at 5 and runs. Then he does some reading and meditates. The New York Times recently ran a feature that included his meditation practice, which he’s started sharing with players. Wade says he values his private time from 5 to 8:30, “because at 8:30 all hell breaks loose with all kinds of issues.”

That’s the main difference between being an assistant and a head coach, he says: the number of decisions. Already this season, adjustments have come fast. Before the first game was played, Wade received a late notice from the NCAA and suddenly had to deal with a freshman player ruled a partial academic qualifier who now must redshirt this season, meaning he can practice but not play in games. It’s one of a hundred things that can go wrong before a season officially begins.

An average day goes like this: After his early morning routine, Wade heads to the Siegel Center to watch video clips of previous games and prepare his practice notes. At 10, there’s a daily staff meeting with his assistant coaches to go through their plan of attack. Then they watch more film, maybe meet with a couple of players on issues that may have arisen on court or off. Afternoon practice is at 1:30. And then Wade returns, watches more film and makes recruiting calls. Then, you guessed it: He watches more film again until 9 or 10 at night. Then he goes home and repeats.

“I run, I read, I work. I don’t have a lot of hobbies,” Wade says. “I read business books, books about the Army, leadership books. There are five books on my desk right now. I haven’t been to a movie in 10 years.”

In person, Wade uses the phrase “cut-and-dry” a lot. It’s how he comes across as well: a no-nonsense, just the facts, I’m here to work, get better and win games coach.

Junior forward Mo Alie-Cox, a fan favorite, says the transition for the players was difficult at first, mostly because of an increased emphasis on strength and conditioning and overall organization.

“We all have schedules now that we get on Sundays, so nobody can have an excuse,” Alie-Cox says, adding that different players adjusted at different speeds. “We didn’t have a lot of real organization like that under Coach Smart. [Wade] is holding us more accountable, being more punctual, stuff like that.” 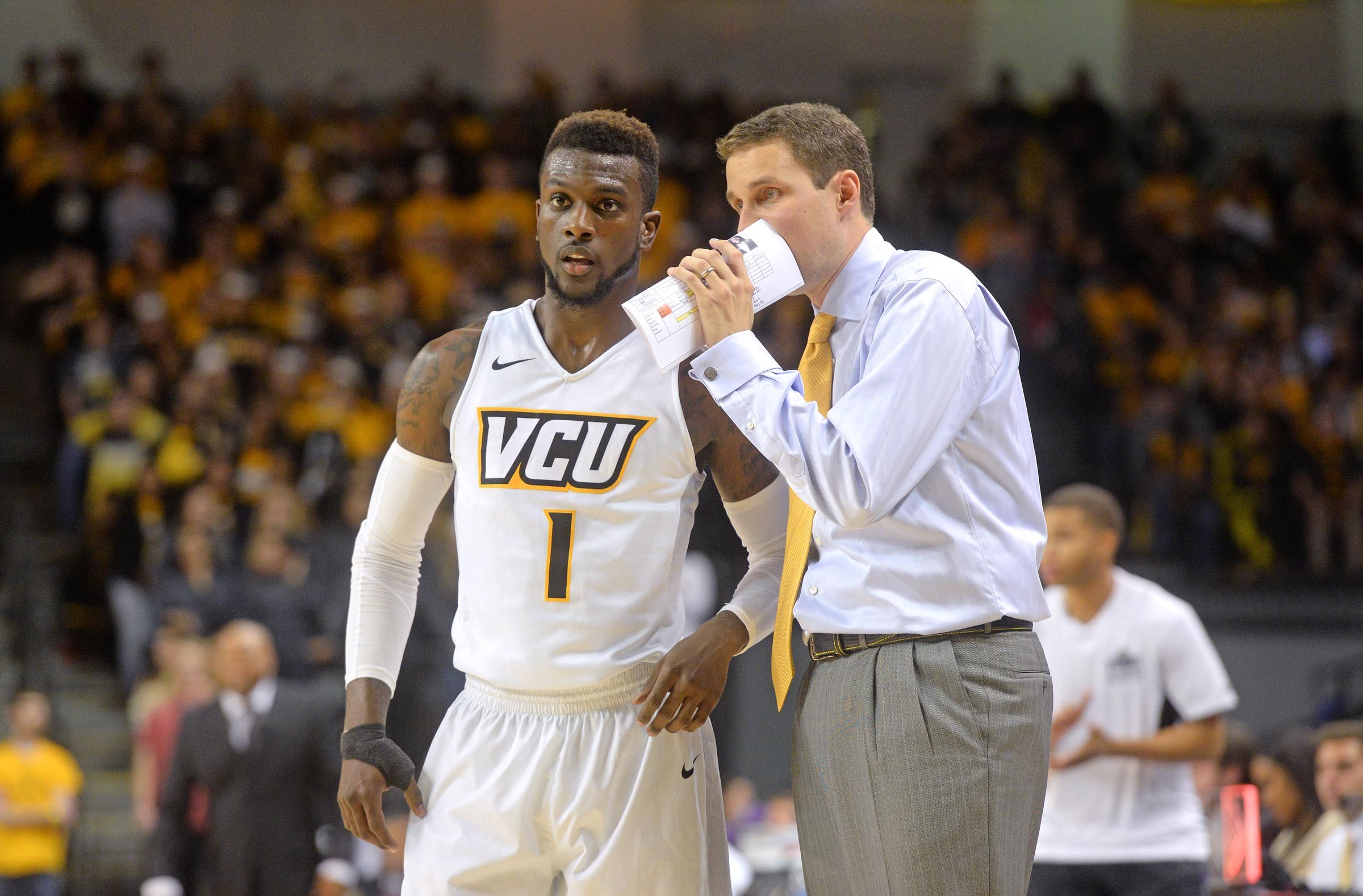 A new area of focus spurred by Wade involves enhanced biometric screening of players, or obsessively monitoring health data points. This allows the coaches to improve conditioning and better understand how hard a player is pushing himself. In practice, coaches track a player’s every movement with GPS, using an accelerometer-based metric for body load and following heart rates to see who’s working the hardest and who might need to pick things up.

“What you can measure you can manage,” says Greg Goldin, director of sports performance for the team, someone Wade brought from Chattanooga. “Coach Wade has a tenacious hunger for every detail. … There is a number tied to everything he is able to do. And he’s only getting better at it.”

Other items tracked include player sleep patterns, what they eat, their caloric burn and resting heart rates. When the team is on the road, room temperatures are always set to 68 degrees, the best for sleeping. Hypoallergenic pillows must be used and shades are always drawn. Wade wants things down to a science.

The coach clearly thinks a key to his success will come from learning the most he can about the players. He goes to lunch with them, texts with them — to an outsider it seems like Wade is another one of their friends.

“You want to get to know them, see them in their element,” Wade says. “Get to know the folks around them so you get a better chance of curbing any issues.”

It’s something he picked up from Smart, one of the first coaches to make the coach-player relationship a cornerstone of the program, according to Radford head coach Mike Jones, who was an assistant under Smart alongside Wade.

“As members of that staff, we all liked the idea of self-analysis,” Jones says. “Shaka took it a step further and it’s had a lot of benefits for him, me and Will. Getting guys to buy into what we’re teaching them.”
Wade isn’t the first coach to care about his players, but his level of communication with them is some next-level stuff.

“The difference is he’s in touch with someone — a player, a recruit, or a coach — I’d say 20 hours out of the day,” says Wade’s wife, Lauren.

Alie-Cox says Wade has proven that being a statistics guy works. “He gives us the percentages. At first you think he’s just talking, but then you see it happening in the game,” he says. “So you trust him more.”

For some players, Alie-Cox acknowledges, it can be harder to trust a coach who didn’t play basketball in college.

“Coach Wade, man, he’s not that athletic. He doesn’t think about lifting weights,” Alie-Cox says. “But when we went to Fort A.P. Hill, he did all the Navy SEAL drills with the rest of the players. Jumping over logs — he did everything we did to show he would go to war with us.

“He just didn’t look as good doing it,” he adds, laughing.

Jones says Wade’s work ethic was “unsurpassed” by any coaches he worked alongside: “He’s an intelligent guy who just has boundless energy. In our profession that’s really important because the guys require it every day.”

After the Wild Wings radio show, fans and season ticketholders line up to meet the new coach and wish him luck. Wade is an A-list celeb for Ram Nation.

One fan in attendance says he fully expects to see VCU back at No. 1 — we’re assuming in the Atlantic 10 Conference in which it plays. An older man, whose father was a college coach, tells Wade in a deadpan voice that he’d like to see him show more enthusiasm.

The coach looks stunned at first, and then smiles. “Well I almost got my first technical [foul] the other night,” he says.

“I’m really a simple guy, kind of boring,” Wade says, deflecting any attention from a Style profile. “You’ll find out.”