The 7 Most Haunted Restaurants in Richmond 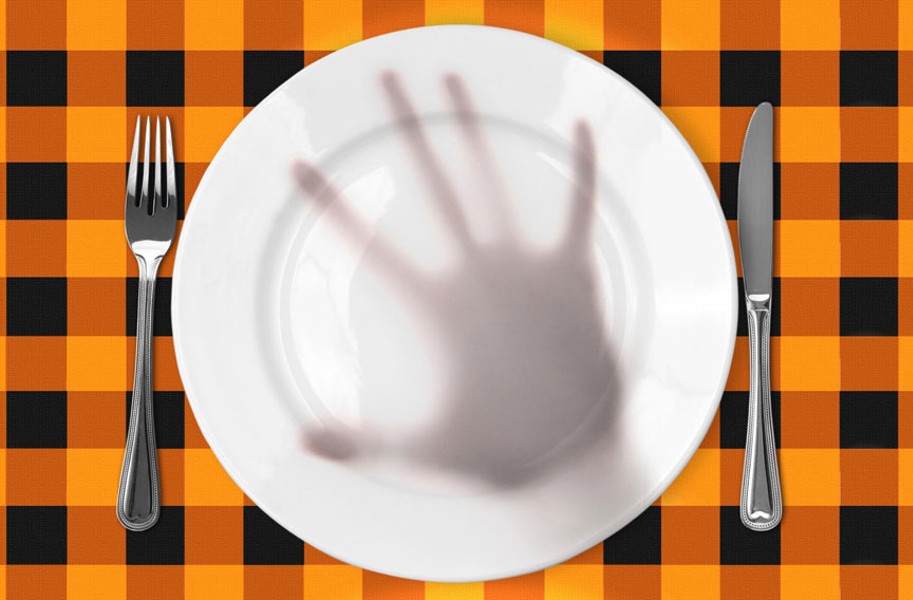 Richmond restaurants may come and go, but their unsettled spirits can haunt forever. Buildings that change hands with time are as old and storied as the city itself. And with decades of people living, loving, visiting and dying in one place, many restaurateurs maintain that something of the past remains behind.

Helen’s at Robinson and Main streets announces that it’s haunted right on the menu. Built in 1912, the building was bought by the Donati family in the 1920s. Helen Donati’s brother renamed the restaurant after her when she died in 1967, raising his family in the upstairs apartment.

When Leslie Tuite bought the space in 1994 with her husband, they were the first owners outside the Donati family in many years.

“Particularly when we first got here, many things happened,” Tuite recalls. “I was working on the place and getting a pizza delivered. A woman with an apron just floated right by me into a booth.”

The presence was a lot stronger then, Tuite says. Lights flickered, electrical appliances went haywire, glasses flew off the counter and shadows moved from doorways. “I still have very vivid images in my head,” she says.

The Donati family lived upstairs until 2004. Tuite says that sometimes in the middle of the night, they heard big band music and scraping chairs across the floor. But when they came down to check, they found no one there.

Tuite presumes the ghost is Helen, keeping watch over the restaurant and her legacy. “I’m skeptical of these things as well,” she says, “but I know what I saw.”

A few blocks down Main Street, Continental Divide occupies a building with a long history of paranormal experiences.

“I didn’t believe in hauntings until I experienced that building,” says Daniel Pritchett, who worked at both Davis & Main and Mint, the previous restaurants, and maintained an art studio in the space upstairs.

“Everybody that worked there — particularly when they were walking down the stairs,” Pritchett says — “felt somebody behind them and turned around to look.”

Continental Divide’s owner, Donnie Barrett, confirms reports of spirits in the building, at 2501 W. Main St. While remodeling the space, he says he often felt chills, like someone was with him.

“I introduced myself,” Barrett says, “I said: ‘Hey, I’m the new tenant, we’re opening a restaurant. I hope you’re cool with that.’” 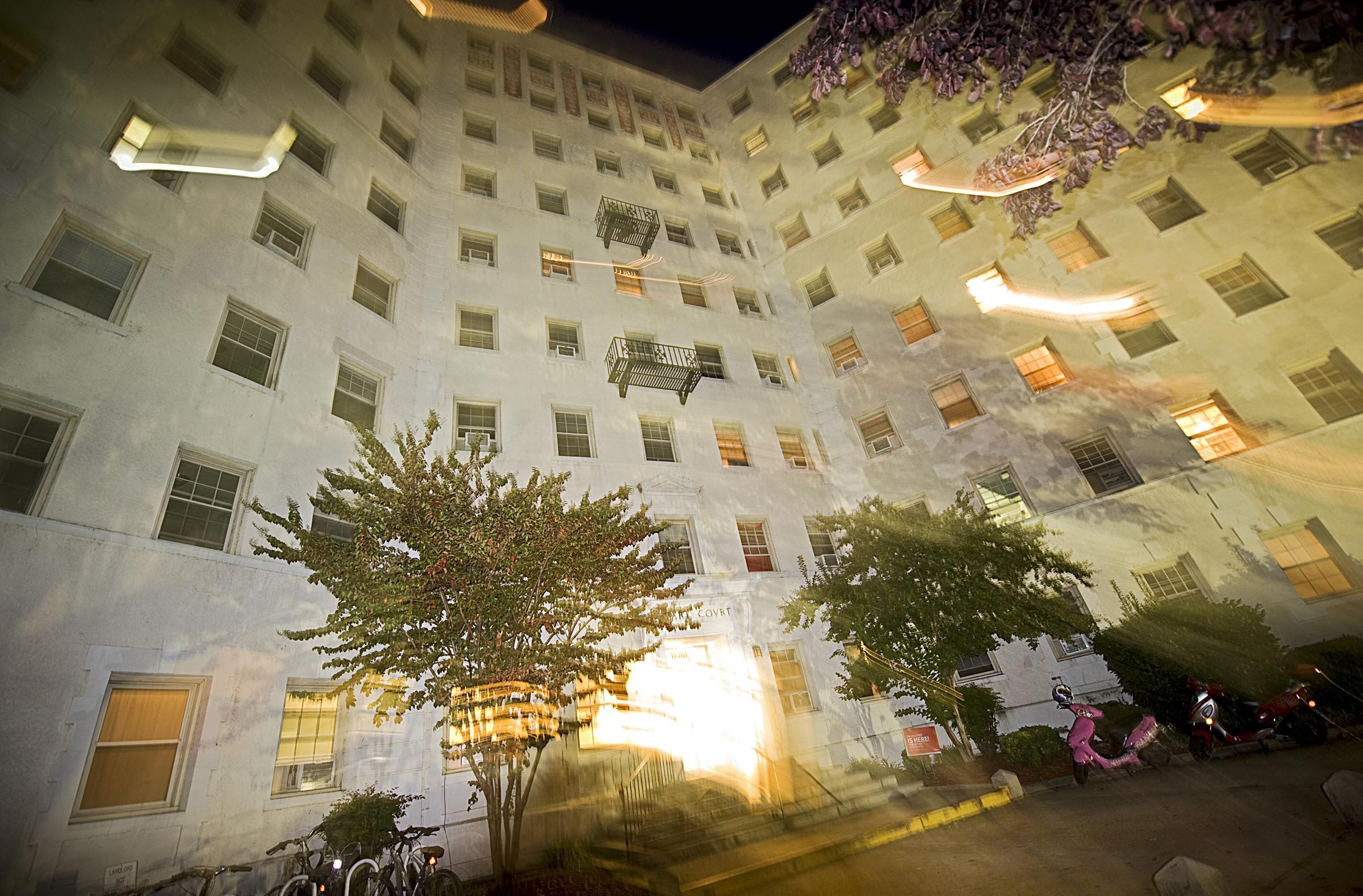 Built in 1924, the Stuart Court Apartments occupy the large, white brick building at 1600 Monument Ave. My Noodle & Bar is the unassuming commercial space in the basement.

Employees of the previous restaurant, the Cellar Door, say the space is haunted, and My Noodle owner Joe Kiatsuranon agrees.

“One day I came early in the morning, like 8 a.m.,” he says. “I walked down to the kitchen to make the special sauce. I saw a soldier wearing an old gray uniform, skinny guy, coming out of the kitchen. He walked right through me.”

Earlier, when Kiatsuranon was fixing up the restaurant for opening, he was there late at night. “I laid down on a booth inside and fell asleep. When I woke up in the middle of the night, I saw a lady in a long white dress trying to kiss me.”

Like Barrett, Kiatsuranon communed with the ghosts. “I prayed to them, explained that I came to be respectful and in peace,” he says. “After that, I haven’t seen them.”

The four-story Greek revival house at 2300 E. Broad St. has been a brothel, a speak-easy, a family home and a private club. Built in 1850, it now serves customers as Patrick Henry Pub & Grille.

James Menefee has tended bar in the building for 12 years, initially for Acapella, the previous restaurant. “Everyone who works here has had an experience,” he says. Menefee, frontman for the band Long Arms, lived upstairs for five years and never saw anything until a few months ago.

“It was after 2 a.m. and there was no one in here, silent,” he says. “I heard the door that connects the kitchen to the hallway, a swinging door. It swung open and closed. It was one of those things where every hair on my body stood on end.”

Menefee ran outside, the door swinging out of the corner of his eye.

He came to work the next day certain that the security cameras would have recorded a spirit. “The camera on the bar, you see me look up, scared, and run outside,” he says. “The camera in the hall, that’s on the door, was totally blank during that period of time. Not before, not after, but during that time, it was blank.” 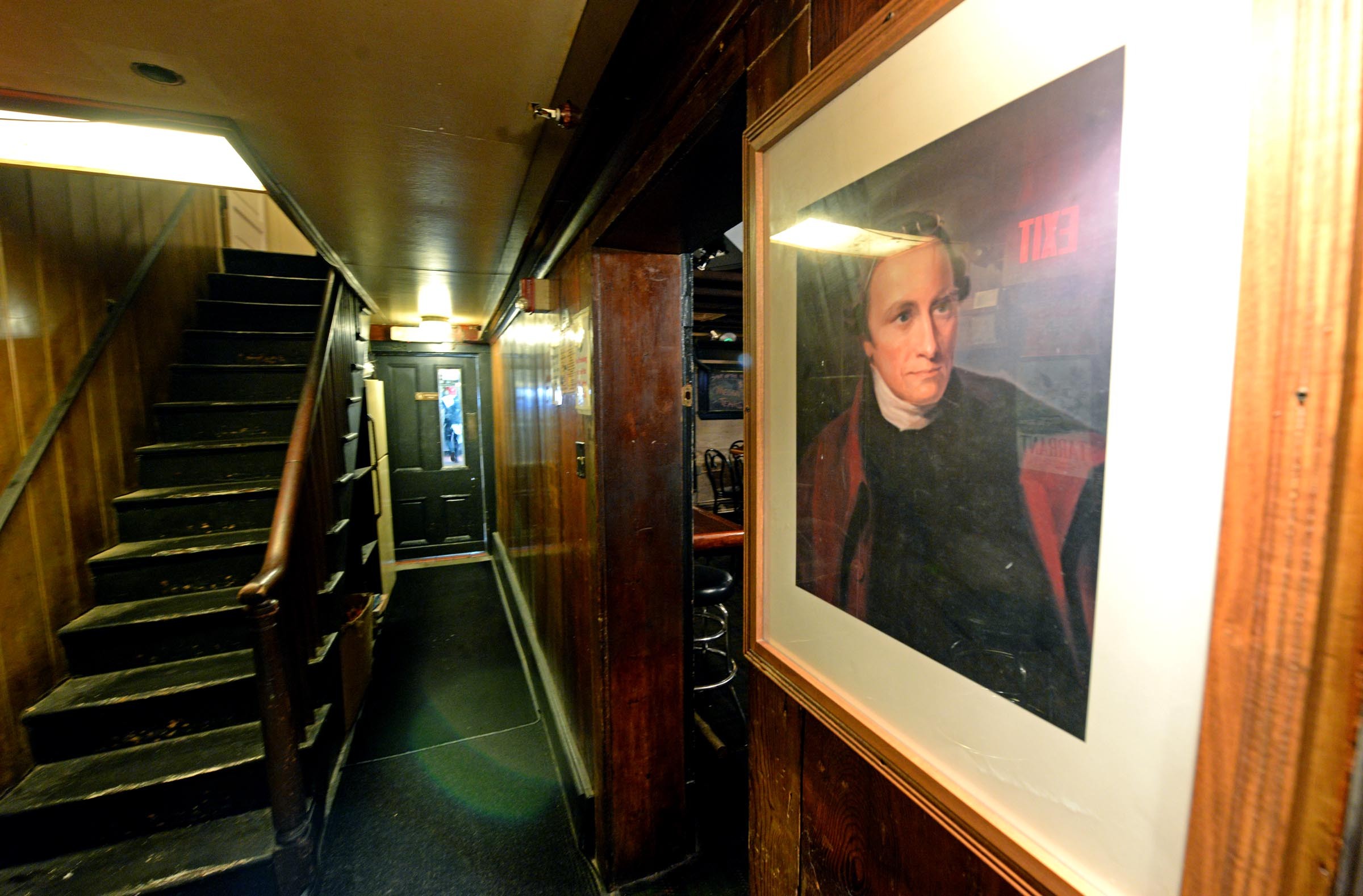 The city’s oldest commercial building still in use is at 1721 E. Franklin St. Earlier this year, Shockoe Whiskey & Wine took it over when Julep’s New Southern Cuisine moved to East Grace Street.

Julep’s owner Amy Ayers explains the haunting. “In the 1800s, a gentleman owned a gun shop there,” she says. “His apprentice and [the apprentice’s] brother were going off to make their own gun shop. So, the gentleman had his apprentice over for dinner in the upstairs apartment, fed him, and then went downstairs.

“He called to his apprentice to come downstairs. And when [the apprentice] got to the top of the steps, he shot him.”

During renovations, Ayers says, contractors struggled to restore the spiral staircase, the scene of the crime. “The steps would sink every time and wouldn’t pass inspection.”

Sandi Bergman, a ghost host for Haunts of Richmond tours, adds that the apprentice made it down the staircase and succumbed to the wound where the women’s bathroom is today.

“Women will be washing their hands, see a young man in the mirror, turn around, and no one is there,” Bergman says.

Shockoe Whiskey & Wine owner Jessica Proffitt says the ghost is still active, and that the murdered apprentice was a mere 15 years old — “just a scared kid.”

In Chesterfield County, Crab Louie’s Seafood Tavern occupies a 1745 structure that long was the home of the Woolridge family. According to a descendent, Rachel Woolridge was 7 or 8 when she died in a fire in the house long ago.

“We call table 10 Rachel’s table,” owner Marie Steele says. “We set the table, and the place setting will go askew. To-go cups shoot out of their sleeves. Wine glasses rattle.”

Steele says Rachel got angry once after a broken vent caused the restaurant to fill up with smoke. Later that day, a heavy piece of the espresso machine flew across the room and nearly hit Steele.

“A little girl who died in a fire, she was angry because her house filled up with smoke again,” Steele says.

Then there are restaurants that would prefer to keep their ghosts — if there are any — a secret.

The private Commonwealth Club, at 401 W. Franklin St., built in 1890, is vast. In addition to two restaurants and a bar, there are quarters on the third floor where, according to former employees, members’ mistresses were kept safely hidden from wives.

James Conklyn, who worked there in the late ’80s and early ’90s, recounts chilling experiences on the third floor, long after the mistress arrangement existed. Lights would go out. He’d turn them back on, and furniture would have moved around.

The locked liquor room was on the third floor. One evening, waiting for the manager with the key, “I heard noises in the room and thought [the manager] was already in there,” Conklyn says. “I tried the knob, it was locked. Then the knob turned a few times on its own.

“The manager comes up the stairs,” he says. “She unlocks the door and the room was super cold, you could see your breath.”

Later, Conklyn says he learned that a mistress, distressed that her lover wouldn’t leave his wife, had hanged herself in her third-floor apartment long ago. Conklyn and his colleagues believe she haunts the space.

Asked about the accounts, a Commonwealth Club spokeswoman confirms that there once were living quarters upstairs, but denies stories of mistresses, a suicide or a ghost.