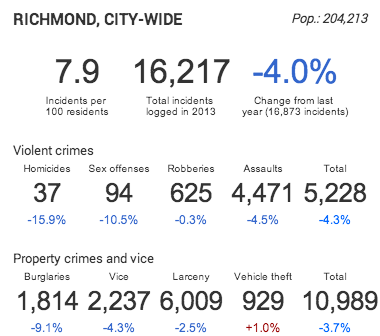 Crime in Richmond dropped in almost every category during 2013. How does the city-wide rate compare to where you live?

Click any neighborhood above to see the local stats.

The fine print: This map is based on statistics and categories published by the Richmond Police Department. Neighborhood population figures are estimates based on 2010 census data.

The map only includes crimes reported to the Richmond Police Department. It doesn't, for example, include offenses reported to VCU police and other local departments. The categories listed do not conform to the FBI's uniform crime reporting standard and shouldn't be used to compare crime in Richmond to other localities.