Our third annual strip search of Richmond. Local artists draw on what's funny about the city we call home.

If you see a guy sitting in the corner of Sticky Rice bent over a sketchbook, chances are good it's Jamie Douglas.

The 24-year-old has been drawing all his life, he says. "I try not to think about it too hard and let it flow the way it wants to."

He gets much of his material from simply sitting, watching and listening; his recent sketches (posted at jamiedouglasillustration.com) include Richmonders sunbathing at Belle Isle, a man drinking bourbon at 3rd Street Diner and two friends at Piccola, Italy, discussing a suicide. "It was over him being dumped," Douglas overheard, "... the last thing she texted was 'lol.'"

"You never know what you're going to hear," Douglas says. "Just weird glimpses into other people's lives, sometimes."

And perhaps, in turn, a glimpse into yourself. Sure, comic strips and panels are good for a laugh. But they're incisive, too: a pixilated or inked or pencil-sketched piece of art that doesn't just scratch the surface. In a town like Richmond, it isn't so easy to get under the surface. And if you do, a sense of humor helps.

For his comics, Douglas finds abundant material everywhere here, from the casual use of "y'all" to the way strangers openly share their life stories. "There's a lot of strange people living around here," he observes. A comic about the beleaguered bear statue on Main Street — which we've crowned the first-place winner of our reader-submitted contest — was a natural. Douglas and his friends have made jokes about people riding the bear for years, he says.

Style Weekly readers may recall an illustration by Douglas that appeared in last year's Comic Strip Issue: a fat, orange cat (whose real name is Lieutenant Dan), flopped in front of a tuna fish can, an ice-cream cone in one paw and a mojito in the other. "Richmond is killing me," the caption read.

Douglas isn't from here, as you might have guessed. He grew up in Binghamton, N.Y., and studied illustration at the Rochester Institute of Technology. There he met Andy Rees, a Connecticut native assigned to the same freshman dorm. The two became fast friends and creative collaborators on editorial cartoons for the university's Reporter Magazine. 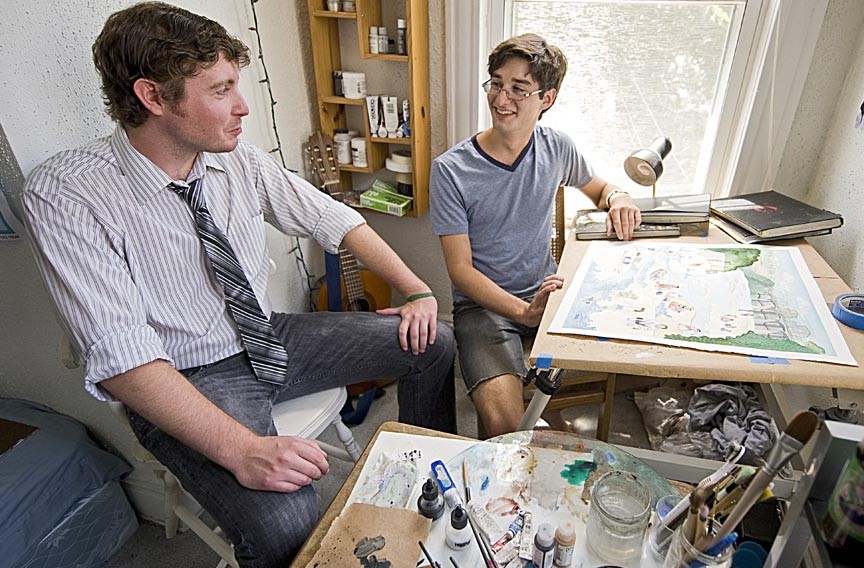 Upon graduation in 2010, they moved to Richmond — a decision precipitated by a spring-break road trip glimpse of the city. It was dark, Douglas recalls, and snowy. They loved it.

When the friends moved here, Douglas says, "we didn't have jobs, and we had time to make comics all the time." They'd trade sketches on bar napkins until a strong concept emerged.

One series they worked on, "The Carpetbaggers," drew on their experiences as Northern transplants. Others, like the cigarette-tiger-heist strip on page 18, started with a desire to do something absurd that was very Richmond — not "mustaches and tall bikes," he says, because "everyone's making those jokes, and it's not just Richmond."

Douglas works at Main Art Supply as well as making sandwiches at Olio. He hopes eventually to make illustration his full-time profession. Until then, his first-place prize includes a comic-strip gig in Style, where he'll join "The HR Department" by Ed Harrington, "Twice-Chewed Tales" by Dale Brumfield and "Ruth & Nail," by last year's Comic Strip Issue winner, Ruthie Proctor.