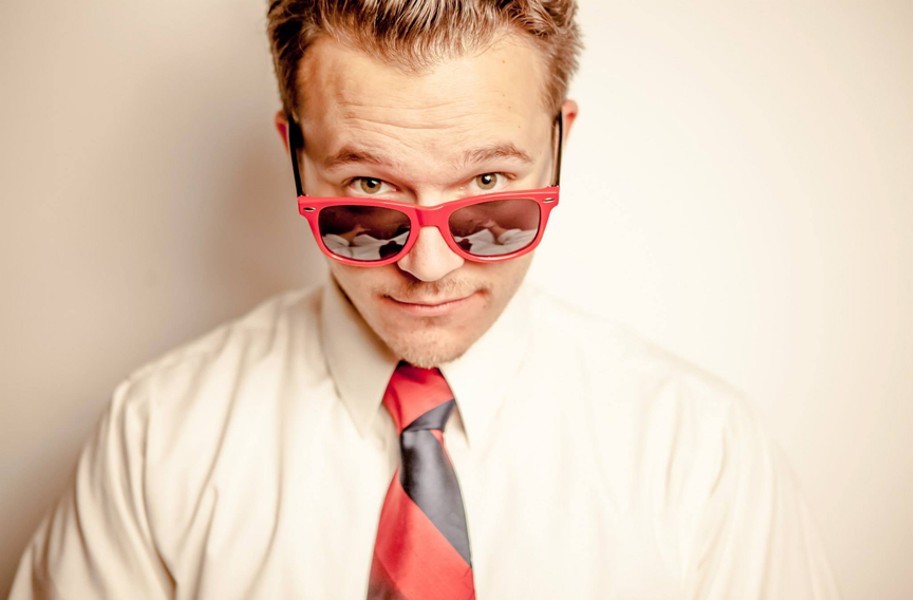 Pop singer and songwriter Riley Kerns, who moved to Richmond in 2013, was one of four finalists for the 2014 Richmond’s Got Talent competition sponsored by University of Richmond and Hot 100.9.

Since moving to Richmond from his hometown of Berryville in 2013, Kerns has been making his name in local music circles as a singer and songwriter. He also earned a finalist spot in the latest RVA's Got Talent competition.

Kerns' blend of radio-friendly pop infused with rock, funk and reggae is influenced by bands as varied as the Beach Boys, the Beatles and the funk and reggae styles of such groups as Sublime and 311. But more than anything, Kerns plays feel-good tunes that remind you of summer. In February, he released the aptly titled, "Summer EP."

His newest song, "Name Dropper," is drenched in California summer pop sounds that take listeners to the hills of West Hollywood without leaving Richmond. Style Weekly asked him about that one song.

Style: Tell us about "Name Dropper."

Kerns: "Name Dropper" was inspired by a vacation I took to California a couple summers ago. Some friends of a family member of mine lived in West Hollywood. They had the money and lived that life. On top of it all, they also knew lots of different "important" people and they didn't let that go unknown. Something as small as watching a Burger King commercial, they'd say, "Yeah … we were just with that guy last weekend." I wasn't very impressed with some of the names they dropped, though I was envious of the fact that they lived in California. Half of the reason I went out there was to test the waters and see if I wanted to move out there. I just found it silly that they would want to try to impress me with all this name dropping when I was already impressed!

It definitely has a California feel to it. What was it like putting together a song like this?

When I dove into writing the song, I already had the inspiration. I love California — the sun, the music, the history — so I wanted to go for that Cali-pop type of vibe. I was going for that Cali-pop sound, so the obvious example was a band like Maroon 5. I don't like to blatantly rip off other artists but I do believe you can give subtle shout-outs to artists who have made an impact on you on way or the other.

Was "Name Dropper" based on someone in particular?

I didn't want to call anyone out. I just find that rude and uncreative. So I turned it into a song about a fictional girl who — if you wanna interpret the song this way — I was involved with. This girl was someone who didn't want to deal with me anymore because I wasn't some big shot with a name worth dropping.

Have you ever name-dropped in certain situations?

I don't think I've met enough people to name-drop! I guess I can go ahead and say that I once took vodka shots with Ryan Cabrera. But other than that, no. I'm not much of a name-dropper.

The pop friendliness of your music is not really seen a lot in Richmond. Do you think there's a lack of good pop music locally?

If there are many pop bands in Richmond, I haven't heard them! That was something I was warned about before moving to Richmond, but I really liked the challenge. I do find it funny when people are so thrown off by the term pop. Pop isn't just Lady Gaga or One Direction. It's the Beatles … Foo Fighters … Sublime … Black Sabbath even. To me, it's all about arrangement, structure, the hook, and simply playing what needs to be there. That's why I like what the Reckless Island [Kerns' bandmates] has going on right now. Though it's reggae, our arrangements and structure are totally pop-based, but if you see us live, you won't leave the show saying, "That's a pop band."

Riley Kerns will perform at the Pasture Palooza Music and Arts Festival in Berryville July 10-13 with Giant Panda Guerilla Dub Squad as well as Richmond bands the Green Boys, People's Blues of Richmond and the Southern Belles. For information visit rileykerns.com.