Andy Vaughan and the Driveline, "I Believe in Cowboys" 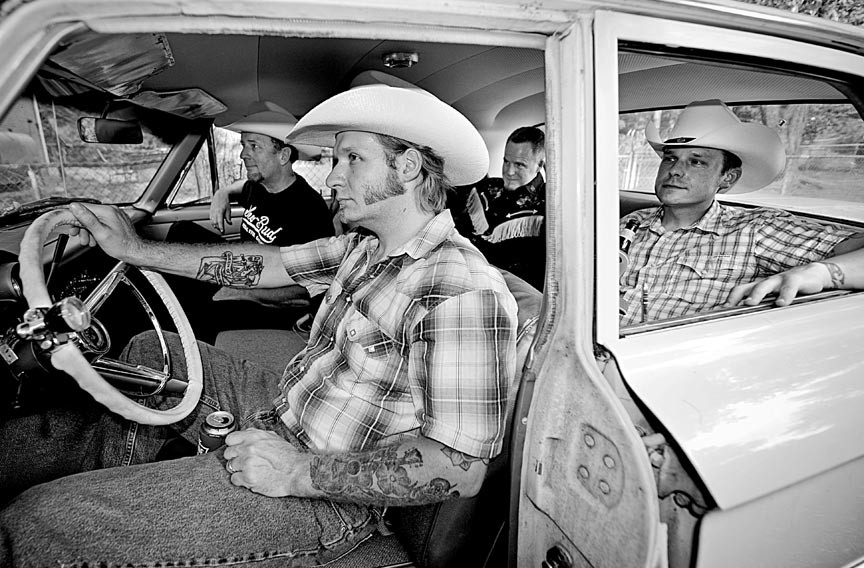 Before heading up the best Richmond country band, as voted by the readers' poll for Style Weekly's 2012 Best of Richmond issue, Andy Vaughan was vocalist and guitarist for Hamburger James. During that rockabilly band's run, Vaughan composed a handful of country music pieces that were then retooled into roots rock 'n' roll songs.

Luckily, he also maintained a backlog of country tunes that just couldn't be changed. These modern honky-tonk anthems became the keystones for Andy Vaughan and the Driveline, composed of drummer Chip Farnsworth, bassist Erik Kutzler, pedal-steel guitarist Slim Stanton and guitarist Jerry Renshaw. Style spoke with the boys in Vaughan's basement rehearsal space to discuss a new track from their upcoming second full-length, "Searching for the Song."

Style: How has the Driveline changed since your first record?

Vaughan: When we first started, we were trying really hard to be a classic-style country band. That's still there, but now we're taking a different approach. Let the song be what it's going to be, don't try to make it into anything else. This created a wider range of song styles. "I Believe in Cowboys" definitely has a classic Western feel to it, but it also doesn't sound like an old song necessarily. It holds on to its roots, but it looks forward as well.

Vaughan: I grew up as most American boys do — watching old Westerns and wanting to be a cowboy. When I was really young it was the really happy stuff like the Lone Ranger, where the good guys wear white and the bad guys wear black. As I got older, I got into the more gritty stuff, like the Clint Eastwood spaghetti Westerns, which were much darker. Growing up with Westerns, there is this romanticized version of the old West and cowboys that's always stuck in the back of my brain. You can't quite let go of how those movies make you feel. Basically, what "I Believe in Cowboys" is about is that romantic notion of good guys and bad guys, doing the right thing and fighting for justice. Obviously the world is a different place than it was over 100 years ago, but the notion is still there and there are still people like that. People are inherently the same even though the world is different.

Have you met any real-life cowboys?

Vaughan: We were in Texas earlier this year and we played the Chicken Coop in Bandera. Bandera is called the Cowboy Capital of the World. [The bars] have dirt floors and no screens in the windows, just old wooden saloons that have country music and western swing every night of the week. There was this guy, Cowboy John, who was a real-life cowboy poet. He writes poetry about horses and ranching and rodeos, has the most amazing mustache, and sat in the corner playing his mandolin along with the band.

In your opinion, what's the state of Richmond's country music scene?

Vaughan: A lot of places [that were hosts to country bands] have closed within the past 18 months. So we're trying to put together this concert series called the River City Barn Dance, with at least four acts that are bluegrass, old-time country, and the occasional Americana band. The main goal is to try to help build the fan base of all these different bands.

Stanton: There's also this interesting subculture of the Lion's Club and VFW Hall and Moose Lodge bands playing a lot of the songs we cover. I go every Wednesday morning to the Hardee's in Chester to see them play. There's a house band and several people come up to sing a few songs. It's a lot of older players and they're fantastic.

You frequently play out of town. What's been your wildest show?

Farnsworth: Brooklyn Rod and Gun. The address was spray-painted in black paint on the old wooden door. Every time we pull up to a place like that, we think, "This is going to be awful." And they always turn out to be the best places we play.

Vaughan: We were being fed beers all night long, people were having a great time, and we played for three hours with no break. We played every song that we do and some that we don't.

Kutzler: And we all got ticketed for public consumption.

Vaughan (picking up a can of beer): This can of Brooklyn Lager stays undrank because we all got tickets for drinking in public. We were standing by the van having a beer before we went in and two unmarked cop cars pulled up.

Farnsworth: This happened right before we went on and word had gotten back into the club about what was going on. When we walked in to play, there was a standing ovation. We were real country outlaws, just getting busted.

Vaughan: The guy who was the promoter for that show insisted on taking the tickets from us and paying them. I'm pretty sure he paid them. Or we all have outstanding warrants in New York. S

Andy Vaughan and the Driveline will be performing at Poe's Pub on July 6 with the Ultra Kings. The next River City Barn Dance will double as their record release show, to be held July 28 at the Camel.