The Snowy Owls, "Could" 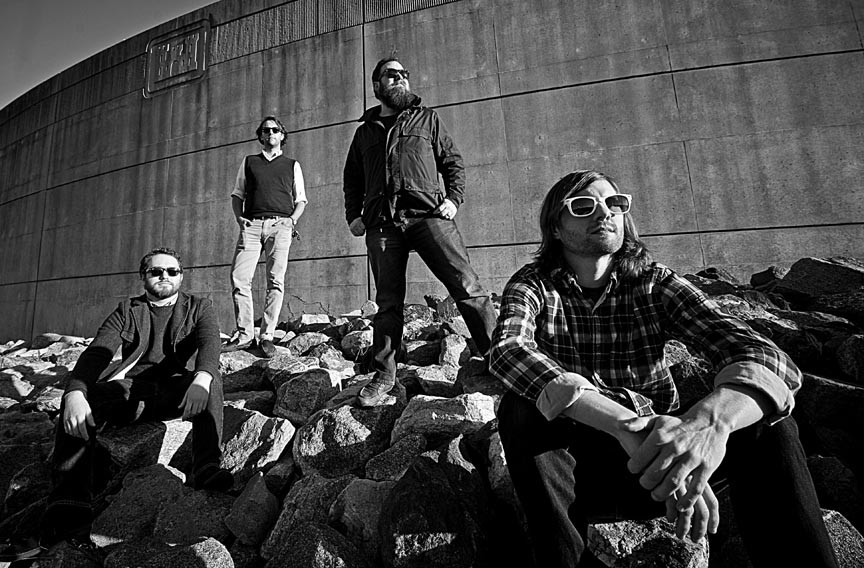 Singer and guitarist Matt Klimas performs with the likes of Louisiana Territory and the Low Branches, bassist Allen Bergendahl has logged countless bands with his Viking Recording Service, and drummer Brandon Martin has been gigging since he was a young lad. Their band, the Snowy Owls, has received a recent flurry of accolades. Since adding a second guitarist, James Wingo, last fall, the Snowy Owls have poured on the fuzz and layered melodies reminiscent of both Sonic Youth and Pavement. Four staples of the group's lauded live sets are available on their first vinyl offering -- a new split 10-inch record with White Laces.

Matt Klimas: "Could" is the turning point from when I was writing and recording everything myself to moving forward with a band. I like bands whose [songs are] delicate and quiet then they switch gears and there's all this fuzz and feedback. I had been listening to a lot of Sebadoh and Dinosaur Jr. and the new Yuck record. Although I was more of a J. Mascis [of Dinosaur Jr.] fan initially, I've come back around to Lou Barlow's songwriting. It really resonates. I wanted to write a simple pop song, but also big and heavy and gritty. None of the chords ended up being too complicated. So the foundation of "Could" started out really simple and the melodies just clicked into place.

The line "I could need you" was where it started lyrically and the rest of the [words were] worked in from that one vignette. There's a romantic tension between two people at the base of it, between letting yourself be in a relationship, while holding back just a bit and feeling things out. Not being completely sure about it. I don't know that I need you, but I could need you. "Could" is a tongue-in-cheek play on that. I don't think I'm that good at telling a specific narrative, so I stay on the poetic side of things. The song is not exactly explaining the situation as much as it is projecting a scenario.

How has new guitarist James Wingo changed the dynamic of the band?

Klimas: I think we forged our way with the three piece, but on the recordings I would play another part. So all the songs have two or more guitars. I wanted to wait and see where we went. James came along and it sounded like a good idea (to add another guitarist).

James Wingo: I remember seeing the guys live two or three times and enjoyed the sound as it was. But specifically on songs like "Yr Eyes," it seemed like there was a little empty sound pocket that need some rhythm guitar action.

Klimas: I'm still transitioning out of being the sole guitarist. There are things I don't have to do anymore. We're still feeling things out and experimenting, but the songs have been opening up and getting bigger. In some of the new songs, there are simple parts but there's also a distinct interplay between the guitars.

How do you create your projected backdrop?

Klimas: For the last show we played, I made two DVDs of looped [visual] clips and then Dave Watkins manipulates the source material. With my background in doing design and visual stuff, it's nice to bring in that extra element to the show and creating the atmosphere.

Allen Bergendahl: The first time he did them at The Camel I was a little distracted by the awesomeness. I wanted to turn around and stare at the back wall.

Klimas: We've talked about setting up an audio/visual show with The Diamond Center, Marionette, and us. Each band uses some visual component to their set.

What's the story behind your cover of St. Vincent's "Actor (Out of Work)?"

Klimas: I love hearing bands do covers of music that's important to them. Especially when I wouldn't have expected them to be listening to that ['particular artist]. I've been obsessed with St. Vincent's writing and guitar playing for the past two years. I love her music and I just wanted to play it. So we said, "what the hell, let's try it and track it."

Brandon Martin: It's a way to gain a new appreciation for songs that you love anyway. We have extended jam sessions in the practice space and will do a half hour's worth of Weezer, we've played Pearl Jam songs, Smashing Pumpkins. And not just the hits, but the B-sides.

Bergendahl: James and Matt have an uncanny ability to pull these songs out of their heads.

Klimas: We're doing a Superdrag cover at our next show. [Playing covers] is just a fun side of it for me. I learn things trying to learn other people's music. That's how I learned to play guitar.

Martin: They just took a lot of heroin and slept.

Klimas: I grew up in the 90s, when alternative was happening. Yeah, I listened to Smashing Pumpkins [a lot]. When you do that in your youth, you can't really escape from it.

Bergendahl: We also have somewhat of a roadmap from bands like Yo la Tengo, Sonic Youth, Superchunk. These are yardsticks to measure your opportunities with the music.

Klimas: But I don't want to be a rehash of the 90s. That's where Snowy Owls is starting from. It's the most immediate and comfortable expression in some ways. We just go with our gut and what's natural, not trying to figure things out too much. Things will evolve. For example, I listen to early Spoon records and it sounds like they're ripping off the Pixies. Spoon is so amazing, but their first record sounds so derivative.

Martin: In order to be a musician in Richmond, you have to give a damn about it. Other bands will show up to our shows and it's not a quid pro quo thing. They're good people making good music, we want to go out and support them. Also, it's not very insular. The bands might not sonically go together, but people still come out and are really into all the bands.

Wingo: It's a lot less based on genre.

Bergendahl: I grew up in Roanoke, but I'd drive to Richmond to see shows. We played a show two weeks ago at Strange Matter that was totally packed in a building that's been doing shows forever. I felt like I was 16 again. In many ways, it hasn't changed at all.

Klimas: It's been cool having been here a few years and finding that music community. There's a diverse cross-section of bands and people are real supportive.

Would you consider Snowy Owls more of a live band than a recording band?

Bergendahl: Up to now yes.

Klimas: We've tried to track stuff when we can, to have something to put out there. But, we've put more energy into live shows to get the band meshing that way. We've gotten comfortable [performing together] over the last couple of months. I'm proud of the recordings we've done, but I still feel like we're just getting started on where we could go.

Bergendahl: The newer material is more protracted, with a lot more space. We started in a more "driving" place and now we've gone to a more open space. This year's going to be crazy!

Martin: We played a show and the [sound] guy came up and said, "you guys might want to tone it down a bit, it's getting kind of washy with the cymbals and the snares." I know it's loud, but that's the point.

The Snowy Owls and White Laces 10-inch EP is available at Steady Sounds, Deep Groove and at thesnowyowls.com.