An interview and free single: “Frontiers” by Dead Fame. 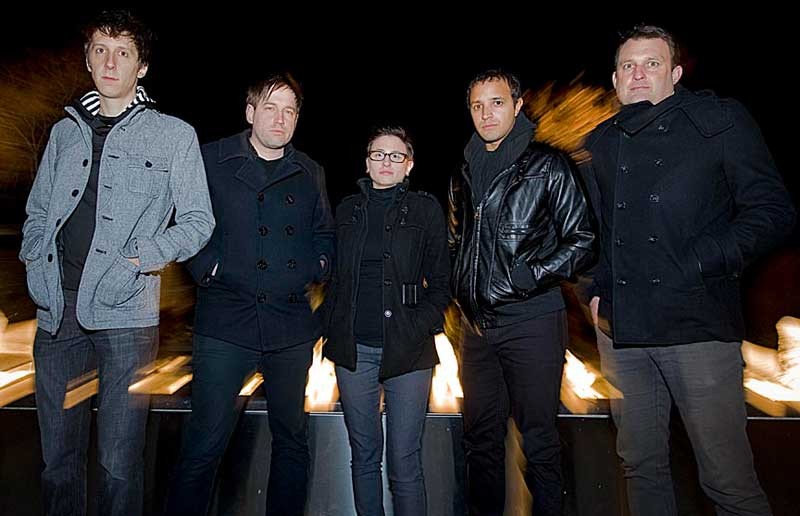 Given the wave of Dead Fame proponents that surfaced within the band's first six months of neon-lit performances, you might assume this was all planned. But after synthesizer player Christopher DeNitto moved back from California and reunited with former band mate and guitarist K.C. Byrnes, they were mostly composing on drum machines and computers. As they dropped in Sadie Powers on bass, Eric Klemen on drums and eventually vocalist Michael Means, 21st-century electronics became the foundation for a bolder brand of new romantic post punk. The upcoming five-song EP, "Frontiers," will be Dead Fame's official declaration to listeners beyond Richmond.

Powers: "Frontiers" was the first song we wrote where I felt it was us as a band, as Dead Fame, rather than five musicians trying to fit in together. It's a jumping-off point. K.C. brought in the drum machine beat that's in the background. He was like, guys, we have to do something with this drumbeat. So everything was written around it.

Byrnes: I was using the drum machine in practice just to get us going, but [in a finished song] the original riff would usually be gone, completely replaced by something else.

DeNitto: The drum machine he wrote that beat on was from our old band, the Soft Complex, and the battery died.

Powers: The battery died two weeks before a gig and we were kind of freaking out.

Klemen: We tried to operate on it.

DeNitto: We needed to replace the internal memory battery, so [to save the drum beat] we had to figure out how to do it like Indiana Jones when he takes the skull and replaces it with a bag of sand. It was not going to happen, so I had to rewrite it on my computer.

Powers: "Frontiers" is raw. We were trying to figure out where to go with it and K.C. says, "You know, this song sounds like Wire." All of a sudden, my bass parts really clicked. I tried to take Wire's "154" album and turn that entire album and how I feel when I listen to that album into a bass line.

Klemen: And I wanted to make the chorus big and powerful, so I use the thick drum pads and a lot of layering.

What inspired the lyrics to "Frontiers"?

Means: I personally don't like to write lyrics ahead of time and make them fit. It seems more natural to have them inspired by what I feel after we start playing. One time about 10 years ago, I had this past-life experience. It was completely random. I was on the brink of sleeping and dreaming, but it stuck with me. I was in the Wild West and I think I was an Indian, because I was able to see my feet.

There's a beat in "Frontiers" that [implies] movement, like walking, and it retriggered this memory or dream or whatever you want to call it. So I went with it. I would go into town, into the saloons, but on the weekends I would go to the outskirts [of town]. People were pissed off because I was playing both sides. [The Indians] wanted to know if I was going to stay and be with them, the tribe, or if I was going to stay in town and gamble. In the end, they dragged me into the center of town, but I don't know what happened after that. It was this idea of being on the border of things, crossing the frontiers, going here and going there. Sometimes people will hold that against you. Like: "You're too liminal, you need to pick [a side]. Are you inside or outside?"
I don't know if it was historically correct, but in the dream it was.

Powers: The lyrics reminded me a lot of the plot to "Edward Scissorhands."

Means: Which is an inside-or-outside story.

Powers: [Director] Tim Burton has said that it was based on how he felt growing up. He was an outsider. For awhile, the norm is to look at the outsider as a novelty, something interesting and insightful. But, also something to be exploited. And then after awhile, people get tired of [the outsider] because it's not familiar. They rebel against it.

Michael, have you sung in a band before?

Means: No. Just to myself.

Byrnes: Michael took some of our practice recordings and did his own vocals over them and we all loved it.

Means: I recorded them on my laptop. I would always try to piece together my own songs, but it was so much work and I don't have a background in piano or anything. [Those songs] will never ever see the light of day.

Powers: I came into practice and K.C. was sitting on the couch with his laptop and he was playing a track Michael had sent back, and K.C. said, "I don't know what Eric's talking about, this guy's awesome."

Byrnes: Eric was nervous we'd give him the boot.

DeNitto: He was afraid of losing another friend. Eric had brought somebody in before and we rejected him.

Klemen: It was a little awkward.

Powers: I started in January and Michael joined in July, so it was almost seven months that we didn't have a singer. It was getting to that point where you have that manic look in your eye, that heroin, harried look like: Where is this going? What am I doing here? All of us have been in bands that false start. You come in strong and you're really excited and then it peters out.

Means: At least you had that time, because stuff was already happening. I could come in and start writing.

DeNitto: He would come in and start singing to [the music], experimenting and improvising.

Where did you record the EP?

Byrnes: We've done most everything at Black Iris Studios. Cam DiNunzio [of Heks Orkest, Denali and others] has been trying to get into producing bands, so we were his guinea pigs.

Means: When we got the song "We Can Run" back [from him], we heard the song in a whole new way. We didn't want somebody to just record us.

Byrnes: When we first started recording, we needed some direction.

Powers: He put a lot of thought into our songs.

Klemen: They have a lot of good equipment there to use as well, for their commercial stuff.

How did you develop your light show?

DeNitto: We really wanted LEDs and other cool lights that were crazy expensive, so we tried to figure out what else we could do that would be cheaper. We thought it'd be cool to have fluorescent bulbs light up when they're triggered by sound. I started looking up, oddly enough, Star Wars light sabers, totally DIY stuff online. But I wanted tubes longer than the light sabers. I found these fluorescent tube covers that were different colors. Then K.C. and I went to the hardware store and bought fluorescent light fixtures and took them apart and built our own.

Byrnes: It's less about us having a light show and more not just playing under whatever lights are provided. And it sets the mood.

Means: There are bigger touring acts that have almost the same lights and lasers that we have.

Powers: Nowadays, you can go onstage and play your music and pour your heart out, but people's attention spans are so short. People are so overloaded with so much stuff, you need the next thing that's going to make them pay attention. And it works with our music, so it's not disingenuous.

Klemen: We've got sight and sound. Soon we're going to be adding smell and taste.

Powers: What about touch?

So, you covered the Robyn song "Dancing on My Own"?

Byrnes: I love Robyn, so I said lets do a Robyn song and I can't believe everyone went for it!

Power: I can't believe I went for it either. But I was like, if people are into it I'll give it a shot. It was a fun song to play.

Means: It sounds like one of our songs. We made it our own. Maybe she'll hear it and put us in the video.

Finish this sentence: "Dead Fame would be the perfect soundtrack to ..."

DeNitto: … the next Batman movie.

Means: … doing something that you always wanted to do, but never had the guts.