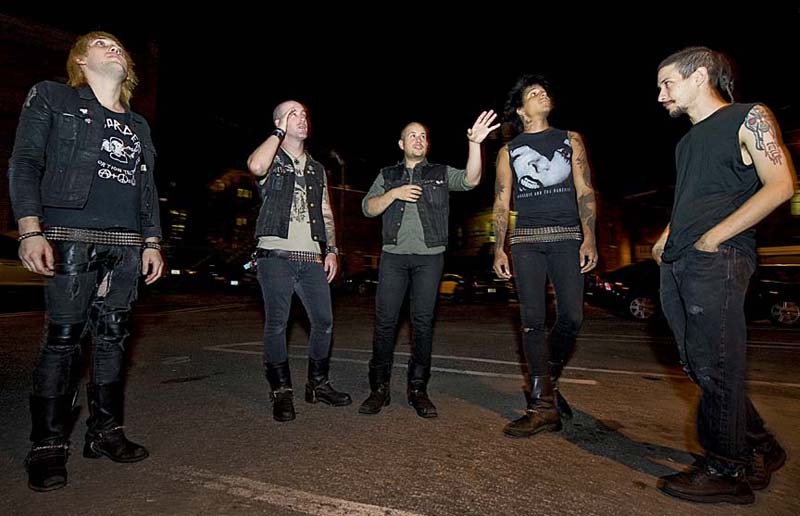 Fans who've witnessed a Lost Tribe performance wouldn't be able to pick the band out of a police lineup. Between thick fog and flickering white lights, its members appear only as spectral shadows while they pound through their set of haunting death rock and postpunk. Having already earned a national following by landing on Stereogum's 18 dark bands to watch list in 2011, based on a demo tape called "The Dawn," Lost Tribe is readying a pair of official releases. The band previewed a new song for Style Weekly, off its eponymous full-length debut from Blind Prophet Records.

Davey Bales: "Dreamcatcher" is more of a motivational song for me. I was going through a rough time and wanted to write about something to lift up my own spirit. I didn't expect anyone to do anything for me, so I was going to do it for myself. I wrote it to have something to go through as I sing it on stage, in the sense of trying to think positively and move forward. It's extremely powerful, more powerful than other songs I've written.

Shravan Deolalikar: This is one of the more complex songs we've written, too. Our music from the get go has been pretty layered. It's not like hardcore where everyone's playing the same thing.

Jonathan (J.K.) Kassalow: But it has this repetitive, driving synth line that I'm playing the whole time, which gives the song a seamless feeling.

Cory Haines: I had to learn how to play a guitar solo for the first time on this song. The first and last.

Davey, you're a first-time vocalist. What made you get behind the mic?

All of you have a history in hardcore punk bands. How did you arrive at Lost Tribe's sound?

Deolalikar: We listen to a lot of different kinds of music outside of hardcore punk and we all have a pretty big interest in the darker 80s, synth-driven, deathrock sound. There are a lot of parallels between 80s hardcore punk bands we like and 80s goth-rock and new wave or darkwave bands we like.

Where does the peace-punk tag come from?

Deolalikar: I think where people get that from is back in the early '80s when all this kind of music was first being created and there was definitely a lot of different bands in the same scene. If you look at the early Crass Records bands or Small Wonder Records, you have artists like Bjork who started there [with her band KUKL] all the way to Chumbawumba. That's probably where the reference comes from. But we don't have a political aspect to us.

What's the most random band you've shared a bill with?

Haines: We've played with everything from power violence to raw punk to piss-drinking noise weirdos.

Deolalikar: Yeah, at the Sacred Bones Records and Stereogum showcase in Brooklyn we played with Yellow Tears.

Haines: We played with a ska band on Halloween.

You have two releases coming out this month. Why did you split them up?

Deolalikar: This is the first band I've ever had where everyone is super-motivated. We've only been a band for little over a year, but as far as how much we've practiced and effort we've put into it, we wanted to have our first release not just be one EP. The demo tape was us testing the waters. We wanted these two records to be the full one-two punch of our official releases. They are the same recording sessions, but the "Unsound" EP will be out on Distort Reality, run by my friend Skell. He's put out Aghast records and S.S.R. records in the past. He does more hardcore punk, which is different than what Blind Prophet Records is doing. It's cool to have a foot in both worlds - more pop-oriented indie music and our [hardcore] roots. I feel Lost Tribe has both elements.

Why did you choose to record with Lance Koehler at Minimum Wage Recording?

Kassalow: He does a really good job of mixing. And we were able to all record at the same time. When you start to overdub a lot of stuff, I think it makes it sound weird, not as charged. He's a very experienced drummer so he knows how make percussion sound good, gives it that sharpness. He made it sound tighter.

Deolalikar: We don't have any samples, any loops, or clips, it's just everyone playing exactly what they need to play. It's still very punk in a sense, because it's still really raw.

Kassalow: We do have one song on the record where we put together something that wasn't like our usual songs.

Deolalikar: We wrote a two-minute instrumental track for the LP. We got kind of experimental on it. JK plays piano and violin on it.

Kassalow: On every single Black Sabbath record there's one song that [guitarist Tony] Iommi made by himself. It's always kind of spacey and crazy-mellow before they drop into the last song. It's our mellow moment.

Where did you get the idea to use strobe lights and fog machines on stage?

Deolalikar: I think what we really wanted to recreate was a time in the past when bands had to go beyond just getting up on stage and playing their instruments to get an audience. They had to perform and be theatrical and the importance of doing that has been lost. We wanted to bring that back.

Kassalow: It's a little more effort, but it does a lot for the [stage show] and I personally enjoy being around smoke and crazy lights.

Haines: It also adds mystery. We don't have to look at everyone's crappy tattoos. [Everyone laughs].

Deolalikar: I can never see the crowd because of the fog.

Bales: I'm kind of in my own zone.

Warzybok: And it's hard to breathe because the smoke gets in your lungs.

Haines: I can't see my own guitar so I tend to mess up a lot.

Kassalow: I can only see Kyle, but not these guys. I try to keep my eye on him so I stay in time.

Deolalikar: Before we did our first show, we had a practice where we actually ran the fog machine and the lights in the practice space just to get a feel of it.

Deolalikar: So we've definitely gotten used to it.

Kassalow: There have been times when we aren't able to do stuff like use the smoke machine.

Is the stage equipment easy to tour with?

Deolalikar: When I toured Europe, it was easier to find someone who has a backline, which is a bass rig, guitar amp, and drums. For us, it's not that simple to bring Lost Tribe proper overseas, or even the West Coast. I have to be more on my A-game in planning tours. We don't want to go out of town and not have proper equipment. We want to be Lost Tribe as we are here, not some watered-down equivalent. If we want to do a West Coast tour, we have to find a fog machine, lights, keyboard amps.

Kassalow: We have to do some careful planning with the keyboards. Our sound is very specific -- early '80s, very cheap digital. If you go to rent backend for that, all they have are nicer-end Rolands and stuff like that.

Deolalikar: GWAR has so much crap, I can't imagine how they play other countries.

Kassalow: I heard they have to make three different versions of their stuff and ship it around.

Your cover art fits your music so well. Who is the artist?

Haines: He was from here, but he moved out to Portland.

Deolalikar: For the LP, he drew a letterbox mural of this landscape view of Hollywood Cemetery looking out over the James River.

What is the one band you can all agree on while out on tour?

Warzybok: We listen to a lot of Prince while we're on tour.

Haines: And Roky Erickson. One time, Shravan was drunk and was singing Roky Erickson to strangers in the men's room at some gas station. He's serenading them and I walked in and was like, "Oh shit." Then he spilled cheese all over the drums.

Bales: We had stopped to get food, like nachos and stuff and he got it all over my drum kit. I had to unload the van afterwards and I was like, "What is this cheese all over my drum kit?" He goes, "I don't know, man." I was so upset, but I couldn't really be mad because it was hilarious.