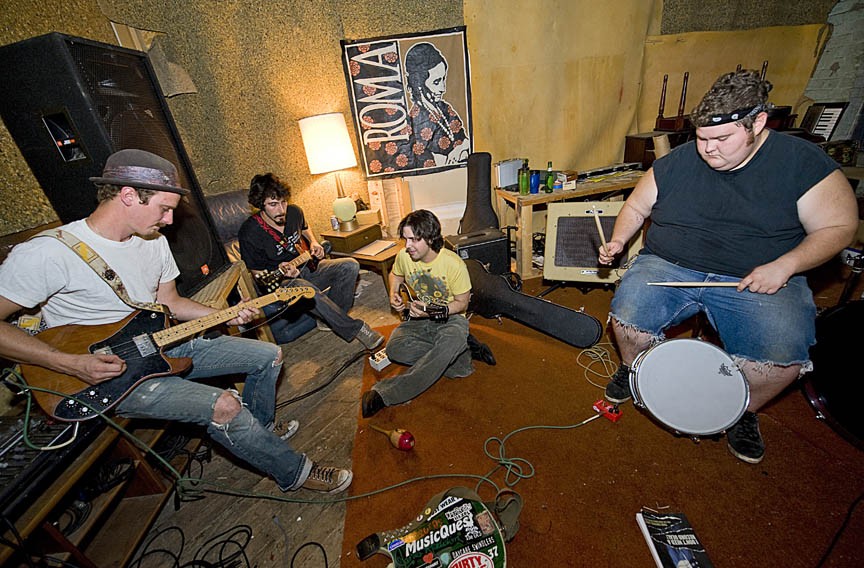 A rich history flows through the music of Roma. Named after a term for the Romani people, this local band seamlessly weds Gypsy sounds with a multitude of Western music traditions including blues, rockabilly and punk. Guitarist and vocalist Charlie Padgett then weaves mythical imagery into grand personal narratives, backed by brother Ben Padgett on drums, Chris Wilkerson on bass and Matt Hansen on lead guitar. On a whim, the group recently sent its superb debut, "Ursa Minor," to Jello Biafra's record label Alternative Tentacles, but it doesn't expect a response from the former Dead Kennedy. Roma just wants people to listen.

Charlie Padgett: Ben and I had gone to a Protomen show at the Plaza Bowl the night before we had practice. [It put me] in the mood to write a riff-based song.

Ben Padgett: The Protomen had played a lot of stuff from their first record, which is more Western rock and roll.

Charlie: So we just kept up with that riff [on "Send My Love"] and found a chorus. I was just singing gibberish nonsense, but I knew what kind of vocal cadence I wanted. I ended up writing the [lyrics] from the point of view of my supposedly ex-girlfriend. We're not so 'ex' all the time, so that's why I wrote the song. It's basically telling her to tell me to get the fuck out. Just leave me alone and send my love to all these other guys. I don't need it anymore. Get over me, or, both of us [should get over it]. We both need to grow a bit. That's where all the lyrics came from. Originally the chorus was much longer, now it's just one word.

Matt Hansen: That was a few weeks before we were going to record. We played a show in West Virginia and you sang the old version.

Charlie: Then the following weekend, we were recording with Dan [Deckelman] and we were going over it and the words were just not working. There were all these words stuffed into [the chorus].

Ben: The old chorus he was trying to do was completely vomiting all over the guitar line.

Charlie: Dan was like, what if you just did one word? (So we used the word) "Maryanna," which is this Brazilian girl I knew a couple of years ago. It was enough syllables and it had a good sound. We listened to Matt's guitar line and it was a perfect call and response. The first parts of the song are still a mouthful, though.

How did you discover Romani music?

Charlie: I fell in love with Django Reinhardt when I was 14 and just love his playing. He's the French gypsy and a fantastic guitar player. His fingers were burned together and he still plays faster than I can. He had a caravan fire and he rushed in to save a few things. I think he was drunk and knocked a lantern over and lit his own caravan on fire. His wife was making bouquets of flowers out of celluloid, so as soon as the lantern went over everything went up. It burned him so deeply that it scorched the tendons [of the third and fourth fingers on his left hand] and he couldn't use them again. This was when he was 18, so he had to teach himself to [play guitar using] his thumb and first two. So, I discovered him and moved further and further into Romani culture and Romani music. That sound, that Eastern European and Southern Spanish sound, I just fell in love with it completely. The movements, the half-steps in particular, and how much it mimics Indian music, which is where the Romanis came from.

Is that your primary influence?

Charlie: At least as far as my writing goes, but I never know what else will come in. I'll have this Eastern-sounding melody, then Matt might throw a blues hook over it. It has this nice tension to it.

Ben: I played in nothing but punk bands coming into this band. For all of us, there's a little bit of punk rock [influence]. But I've been trying to throw in more gypsy-jazz fills, although I never learned how to play jazz drums.

Do you incorporate theatrics into your sets?

Ben: Charlie and I have toyed with the idea of getting a belly dancer.

Charlie: I think it would go over well. As far as that goes, I would like to free myself up from rhythm guitar so I can just be more of a frontman and have that much more energy. Or maybe add a multi-instrumentalist. We met someone who can play trumpet, rhythm guitar, and apparently he can beatbox while he plays harmonica.

What is your funniest tour story?

Ben: Having to rig a windshield wiper with twine in New Jersey.

Charlie: We got caught in a storm. I was driving and I couldn't see anything. Our windshield wiper went out, so we had a rope tied to it running through both windows. [Ben] was on one side and our friend on the other. One would pull and [the wiper] would go up and the other would pull and it would go back down. I could not stop laughing.

Ben: But once we rigged it, it stopped raining.

Ben: In Pittsburgh, it was opening night of a venue and art gallery in Blood [gang] territory.

Chris Wilkerson: And it was 4th of July, so was that gunfire? Um, let's go back inside.

What did you like about working with Dan-O Deckleman at Snake Oil Recording?

Wilkerson: Not only does he have a beautiful selection of vintage equipment that he let us paw at endlessley...

Ben: I used a '68 Ludwig on the record and most of his cymbals because I have junk cymbals that I've picked up here and there.

Wilkerson: ...he was also willing to let us try some things. He had heard the demos we recorded previously and he had a very clear vision of how to get from there to an even better place.

Hansen: He was really easy to work with. I got really intimidated when he had me do some solo stuff. I'm usually a pretty calm and collected person and I was freaking out. He was like, dude we have plenty of time, just take it easy.

Ben: He has his own ideas, but he doesn't tell you what to do.

Charlie: He would also bring in inspiration every day. Courtney Love was our inspiration one day, which was a fun day. One day it was a signed Nick Cave wine bottle. He met all the Bad Seeds and he heard I liked Nick Cave, so I'm doing vocals and he sets this thing right in front of me.

Ben: The B-3 Hammond Organ with the Leslie speaker [cabinet] was inspiration enough. We drug that giant thing out into the middle of the floor.

What is the most exotic instrument on the album?

Wilkerson: These two hauled an anvil from their family farm and we put it on the record.

Ben: On "The Words We Spoke," you can hear this plinking every now and then. That's me with an hammer on an anvil, on the skinny end. That's the resonating end. I nearly threw the hammer through the '68 Ludwig, because when you hit steel to steel it wants to shoot places.

Are you working on your next record?

Ben: Yeah, we have a theme in mind for the next one.

Charlie: Panem et Circenses, which means "bread and circuses" in Latin. Republicans and McDonalds. We do a lot of storytelling. I hadn't listened to the first record all the way through since we recorded it, but I did on the way down here and I didn't realize how many references we have to drinking and to wandering.

Ben: And there's a lot of biblical references, like a drunk Moses.

Wilkerson: Wandering through the desert for 40 years.