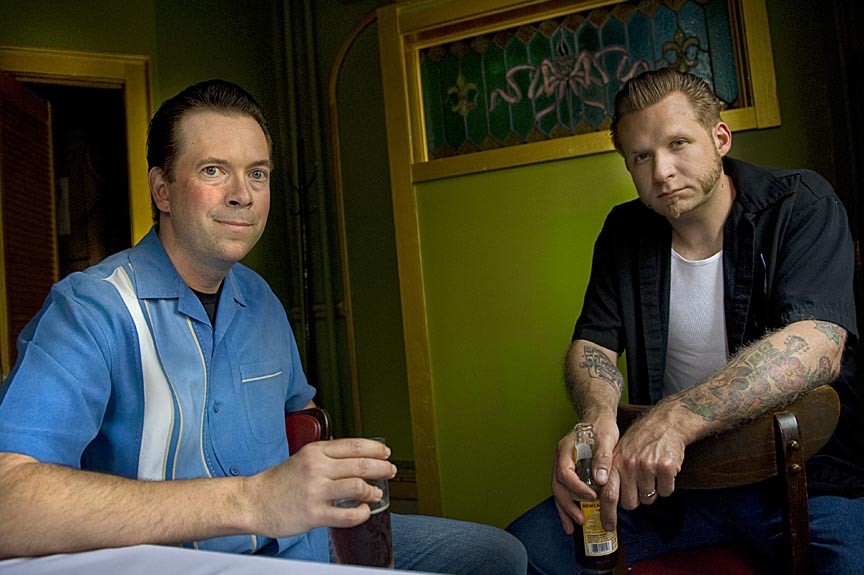 In 2005 four buddies hopped into a 1963 Ford Galaxie and bolted to Memphis, Tenn., for an Elvis-themed vacation. After touring the storied Sun Studio, the guys decided right then and there to form a band so they could return someday to record a song. Bassist Will Armstrong had never picked up an instrument; guitarist and vocalist Andy Vaughan's last band was in high school; and drummer Bill Pettus had played everything except roots music.

Against the odds Hamburger James came together in time for its first gig with Janis Martin, who just happened to be the female Elvis. The band's second album, "Watch That Cadillac Burn," is packed with rollicking, hot-rod rock 'n' roll that could only have been recorded at, you guessed it, Sun Studio.

Andy Vaughan: "Watch That Cadillac Burn" is the title track (of the new album) and it's probably got the most interesting story.

Will Armstrong: Another story from rock and roll history. Bill is the historian of the band and this was his first foray into songwriting.

Bill Pettus: I was reading the Elvis Presley biography Last Plane to Memphis and they were talking about the early days when it was just a three-piece band, before they got a drummer. Elvis, Bill Black, and Scotty Moore were touring non-stop through the South. Elvis had finally gotten his first pink Cadillac. They're driving from Hope, Arkansas to Texarkana one night and Elvis is speeding and the break on the Cadillac catches fire. They have to pull over and grab all the gear. Then they stood on the side of the road watching this pink Cadillac go up in flames. I thought, "Wow that's piognant, that's got to be a song."

Vaughan: There was nothing left, it burned to the ground. There's one photo that exists of it after it burned up, just the charred back end.

Armstrong: Bill Black's bass was always sitting on the roof of the car. It was a big upright bass and when you're driving in a Cadillac, as big as a Caddy's trunk is, you can't fit an upright bass in there. So they're scrambling, grabbing guitars and amplifiers out of the trunk. To keep the bass from going up in flames, Bill pulls out a pocketknife and cuts the rope that had the bass tied to the top of the car.

Style: What is the legend of Hamburger James?

Armstrong: It's a tale of forgiveness. Hamburger James was one of Elvis' Memphis Mafia back in the seventies. His only job was to get Elvis hamburgers whenever he wanted one. Elvis would call him in the middle of the night and tell him to go get a bag of burgers and James would bring it to the guys while they were practicing music. They way we've heard it is that Elvis had fired one of his bag men so he asked Hamburger James to hold his doctor's kit. Elvis had a bag man to carry the things he didn't want to get busted with.

Pettus: His meds, pictures of Priscilla, and his bling.

Armstrong: Hamburger James freaks out with this bag of jewelry, money, and supposedly naked pictures of Priscilla, and steals it. He tries to get on the last plane out of Vegas back to Memphis. Elvis wants to kill him, so he and the rest of the Memphis Mafia bust through the airport. There's hardly any security in the seventies and Elvis is flashing a badge and, of course, he's Elvis. He literally pulls Hamburger James off the plane. They take him back to the hotel and the guys think Elvis is going to kill him.

Vaughan: He picks a coffee table up and they think he's just going to bash the guy's head in with it.

Armstrong: Then Elvis breaks down crying and forgives him, then gives him some money and sends him on his way.

Armstrong: There is a James Caughley, which was the guy's name, that fits the age of this guy, still down in the Memphis area.

Style: How is the new record different from your debut, "Last Plane to Memphis"?

Armstrong: Night and day. We really evolved because we'd only been together six months before we did the first one. We started the first one as a demo, but the recording went so well we plowed on through and did fifteen songs.

Pettus: We thought we were going to do seven.

Armstrong: The dynamics of the songs are a lot different. We are all involved [in the songwriting].

Vaughan: We recorded at Sun for a week solid. We all stayed in a three-story condo and we set up a practice space in the basement. It was like putting the blinders on and focusing on music the whole time we were there. We finished four songs that weren't at all record ready, but because we were so focused on it, we got them worked out. Being 850 miles away from home, there were no daily life distractions, just music and nothing else. We're really proud of the product.

Style: Were you nervous recording at Sun?

Vaughan: The very first moment when we first got there, I think we were all feeling completely tense and nervous and just overwhelmed. Holy cow, here we are in Sun Studio, ground zero for rock and roll, and we're recording.

Armstrong: The way Sam Philips would get guys to relax, he'd bust their chops. (Engineer Matt Ross-Spang) was that kind of guy, he was non-stop.

Vaughan: Harassing, cussing at us through the headphones, joking back and forth, really funny stuff. He kept messing with us and everyone just loosened up. After awhile, you kind of forget where you are and you work on making some music. The coolest moment for me was stepping back and watching through the control room as one of these guys laid down a track. Suddenly it hits you again where you are. I'm looking at Bill's drum kit sitting back in the corner of Sun with a giant portrait of Elvis hanging over his head. Wow, we really are here doing this.

Armstrong: They got me to set my bass up where they always set the bass up in that room. There's a little hole in the floor where the bass always goes.

Vaughan: The acoustic tiles that are on the ceiling and the wall are the ones Sam Philips hung by hand when he built the studio.

Style: What is one thing everyone must do in Memphis?

Vaughan: It's a little neighborhood place. We wanted to eat at the best place off the tourist map. Matt said it was the best fried chicken we'd ever eat in our life and it was.

Armstrong: We went back to get a second bucket that same night so we could have cold chicken as we recorded. It was this real salt-of-the-earth place.

Style: What draws you to early rock and roll?

Pettus: It's a departure for me. I've always played classic rock, punk rock, swing, everything except roots music. So, I wanted to give it a whirl. I'd been listening to more and more of it and it certainly resonates with everybody. At our gigs, we get everybody from grandma to little kids enjoying the music.

Armstrong: When I first started getting into music on my own, my dad heard what I was listening to. I don't know if it was a conscious "I've gotta change his mind a little bit." It was 1984, I was 14, and I had the Van Halen record. He came home from work and gave me the Buddy Holly box set and that was really influential as far as what I listened to. I didn't have any music and didn't have money to buy my own stuff, so I dove into that.

Vaughan: Older music has always resonated with me. There's something that grabs me about early rock and roll. I'm huge into older country and honky tonk stuff and there's a lot of that in Hamburger James. That's what rockabilly was, mixing blues and R&B with country. There's something about the soul of that music that speaks to me.

Style: What is your favorite Elvis song?

Vaughan: That's tough, since he recorded thousands. "One Night," there's something about the raw energy in that song that's guttural and awesome. He had hit his stride as a performer by then. His early rockabilly stuff, he was still a little unsure of himself, but by the time the later fifties stuff came out, he was the king of rock and roll.

Armstrong: I can't pick one.

Style: What was it like playing with the late Janis Martin?

Vaughan: She was a firecracker man. We didn't know what to expect going in. Here's somebody who recorded back in the fifties, an older lady, and none of us had ever seen her perform. We were half expecting some old grandma to come in and kind of sit there on stage and sing her songs. When she shows up, she blew us away, with just as much energy as fourteen-year-old Janis Martin.

Pettus: She was called the Female Elvis because she did the bump and grind, which really caused a sensation back then. Girls didn't get on stage and act like that. She wound up licking the sweat off of our guitar player's brow after a guitar solo.

Armstrong: I told her we were putting the band together, and she said, "Make sure you get a band, now, that really rocks." The guys had learned to play the music just like the records. They came in and she goes, "Now don't play it like the records. [Producer] Chet Atkins made all my records sound like Christmas music. I want you to really rock it!" [Everyone laughs.]

She was really happy at the end of the show. She was signing autographs and I came up and got one of the posters signed and she says, "You told me these boys could rock it. And they really did!" She carried a piano player with her at all times, because he's really good and she knows what to expect. If the band isn't any good, he could blow right over top of them and take over. He didn't have to do that. I remember the guys were really worried like, "Who is this guy, Willie Hayes, that she's bringing along?" He ended up playing on our first record, we liked him so much.

"Watch That Cadillac Burn" is available at hamburgerjames.com, iTunes, Amazon, and CDBaby.