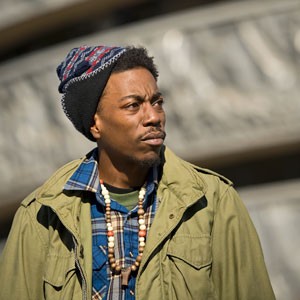 There's a quiet storm brewing within the Richmond hip-hop scene, and it threatens to wash away any assumptions you might have about the music or its creators. Capital city native Ohbliv is a part of this burgeoning community of progressive beat-makers, producing expressive instrumental tracks emblazoned with R&B and the crackle and echo of '60s psychedelia. He's nothing if not prolific, releasing a tape with the Student Hip Hop Organization at Virginia Commonwealth University called “Soulphonic”; a tape with his crew Chocolate Milk Collective entitled “Hydrosub”; and a mix for Cascade Records -- all within the past month.

Ohbliv: “Keepthefaith” has a smooth beat inspired by my vocal music background. There's a girl singing on it, and I chopped [her vocals] up to make it interesting. The title is a play on who I sampled - Faith Evans. It was one of her earlier songs from her first album. What I'm hearing from other people is that I'm known for making smooth, groovy tracks. This is one of those. I'm starting to branch out though, getting a little more abstract. A lot of my newer stuff, some people would call it “off.” This one is a little more straight ahead.

Do you play any instruments?

I play keys, I play the trumpet, although I haven't played in a few years, and I sing. Mainly I use samples from records. There are a few songs where I've tinkled the keys on it, mainly for bass lines or adding [a sound]. I'm a sample-based producer. I love the sound of vinyl and I want to keep that alive.

How many records do you own?

Estimating, it's running up close to 5,000. We just moved into our new place and haven't had a chance to get organized yet, so I have records everywhere. I'm a big digger. For a couple of years, you would see me in Plan 9 every other day. Throwing down major money, money I didn't need to spend. I can't help it, I love records man. Steady Sounds has a really good layout for their website, where they post new additions and stuff. Kind of like record porn, just pictures of records. That exclusivity [of vinyl] makes it special. Even if the music is subpar, you still have that piece.

What is your first musical memory?

When I was in third grade, I was in chorus and my class had a performance at Dogwood Dell. We were singing and I had a little three-bar solo where I got out in front of everybody to sing and dance. That was it. After elementary school, I got into acting and so I stopped (performing music) for a little bit. But, sophomore year of high school I got back into music. I was in chorus and ended up going to a governor's school for music.

What led you to hip hop production?

I can't really say that there was a definitive moment, because I've always been involved in music. For me to focus on doing hip hop and beats, it would be listening to Slum Village “Fantastic,” volume one and two. Jay Dee, hands down, is my favorite producer of all time. When I heard him, I knew I had to (produce). Coming from a music background, just knowing theory and things like that, and then hearing his beats and how he constructed them, inspired me a lot.

When did you produce your first beats?

Back then, everything was really fresh and new. When I was in high school, I would make pause tapes. I had this component set that was a turntable and two tape decks all in one. I would play a record and find a loop, then pause, play, put down the loop, pause it, bring it back, do it again and I would create a beat like that. I would sit for an hour or two doing that. I guess I would consider that my first production. But, my first official production was with my first rap group, called Score One for the Little Guy. I had bought a sampler, an SP303. I met a friend who had all types of engineering equipment and another rapper named Corey Smith and we mashed that out. That album was my first official production and that was 2007.

What is the Chocolate Milk Collective all about?

We're building Chocolate Milk into a multi-media thing, a collective of cats who like art and want to put it out there for people. We do music production, we do video production, art, posters, things like that. We're also working on clothing, too, designing real small items like hats, wristbands, stuff like that.

I also do rap, but right now I'm on hiatus from rapping. I've been really focusing on production. There's a little beat scene growing [in Richmond]. I don't know if you're aware of the L.A. scene, like Flying Lotus and all them cats. We're trying to establish the East Coast faction of that. So, Chocolate Milk will drop an EP here and there, of all production.

Why did you stop rapping?

I hate to put a label on what I do, but it's almost like post-rap or post-hip-hop. We're not avoiding rappers, but we want the beats to stand alone. I'm influenced by a lot of instrumentalists. I came up listening to jazz and they were able to do it without having singers all over their music. The beat scene and the jazz scene parallel in a lot of aspects.

My very first release was “Rugged Tranquility,” which was released in early 2009 through another crew that I'm affiliated with in Richmond, Just Plain Sounds. They're a more traditional hip-hop label and I do production for them. I put out “EZ Widas” on 4/20 and Wigflip [Records] out of Baltimore heard  it and picked it up. They wanted to help distribute it, so that was my introduction nationally.

What do you like best about the Richmond hip hop scene?

Diversity. That's the good thing about Richmond in general. The fact that you can have artists like myself do a show one night with Nickelus F and Suburban District and Noah O and everybody has their respective fan-bases. Growing up in Richmond, I'm just influenced by everything and I feel that in everybody. I can sit back with the most hardcore cats and listen to some crazy rock stuff, because we grew up in Richmond and associate with all types of people. We just need people to be on point with it, to be real with their support. There's room to grow here too, there's room to get your game together.

You incorporate a lot of images into your work. What do you look for?

I'm a big fan of aesthetic and visuals.  I like VHS movies, that sort of grainy vibe. For my sound, I envision [images] that are hazy or a little off, but really really beautiful. That's how I tend to describe my music, either it's going to be abstract or it's going be really pretty.

Do you also create visual art?

I'm just getting into graphic arts, but mainly I do old-school collage. I wish you could see my place, I've got tons of old stuff that I use for my work.

What are you reading right now?

I just read Jay-Z's “Decoded” and it was pretty interesting. I am a fan of biographies, memoirs, and artists. Marvin Gaye's book, “Divided Soul” by David Ritz, that was a big inspiration. Marvin Gaye in general. I like to read books about meta-physics, alternative theories, and stuff like that.  I'm currently reading “Time and The Technosphere: The Law of Time In Human Affairs” by Jose Arguelles.

What is your next solo release?

I'm working on another album with a label in L.A. called Huh When Where. I'm really excited about this one. They have the whole [marketing] machine set up behind them. I'm working that out for sometime later this year. I've built relationships with a lot of people in L.A. and I've come to find out that a lot of my fan base is in L.A., too. It's only right to try and learn what they're doing and bring that back over here.