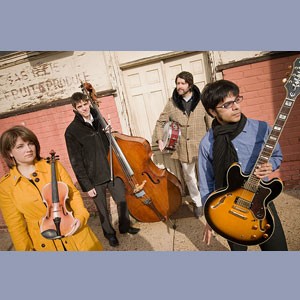 Venture a guess as to the sound of Prabir Mehta's latest band and your safe-bet answer would be “pop-centric rock and roll.” It must be in the guy's blood, because Prabir/Goldrush should have been a folk band. Prabir, former leader of Prabir and the Substitutes and currently a guitarist in Long Arms, assembled Prabir/Goldrush around two members of the Richmond Symphony's string section -- violinist Treesa Gold and husband Matt Gold on upright bass. If the sheer volume doesn't convince you that these instruments can, and will rock, adds drummer Gregg Butler, “then you have to hear Treesa play the guitar solo from Queen's ‘Bohemian Rhapsody,' on violin.”

Prabir/Goldrush unveils this brand new song just in time for its appearance at the sixth annual Ghost of Pop Festival.

Prabir Mehta: "It's Too Late" was written towards the end of The Substitutes and is [partly] a reflection of our breakup. The song is about how everyone I knew was in love and everyone I knew was content doing their own thing as a couple. I've said horrible things about people for being in committed relationships, or for having real well-tied bonds to their partners. I've always negated that. I've always said, "Be single forever." But, towards the end of The Substitutes, I got really lonely. Through no fault of their own, they were just living their own lives and I was being a crabby little bitch. Like, ‘What about me?' There I was, a single dude during the breakup period of my band. [Eventually] I had that moment of realization, ‘Ohhh, they're in love.'

It was fun to write the lyrics to it, because I looked back on all my friends around that time in my life, not just the band mates. They were all in committed relationships and getting married and having children. Here I am, realizing that I haven't done shit. To make the subject matter more fun, I exaggerated the story by adding a caveat. I thought, wouldn't it be funny if I realized all of this on the last day of earth? I've been doing it wrong the whole time. Great, I wasted all this time being cynical and sardonic about love instead of embracing it. But, now it's too late.

Treesa Gold: I like this song a whole lot, because Prabir let me put in all the weird chords I wanted. He said, "Here at the end, just go crazy. Do whatever you feel like doing."

Mehta: It fits. To me, it's the music of the walls crumbling, of the earth splitting open, and clouds turning black. It gets very weird and then it ends.

Style: Is this a new direction for you, lyrically?

Mehta: Prabir/Goldrush is very selfish for me, because I've always wanted to write songs like this. They are a departure from The Substitutes. There are topics which I never approached with Chris, Charlie, and Robbie because The Substitutes were very much into (writing) a concrete set of songs about playing in a rock band, or a set of songs about our last breakup, or a set of songs about touring. The more I started writing with Treesa and Matt and later with Gregg, the more it turned into, "It's interesting how wealthy people live in a weird bubble that they aren't aware of." So let's sing a song about that. We have a song called "God," which is my perspective on religion and faith, or the lack thereof. These songs have taken an odd pseudo-political direction without meaning to.

Style: Treesa and Matt, describe how this band is different than playing in the symphony.

Treesa Gold: For me, it's different because there's no printed music so there's no visual safety net. When we first started, I wanted to write everything down, even if we made it up. I felt like I would forget it all.

Matt Gold: Also, you physically have to behave yourself when you're a member of a one-hundred piece ensemble. One time, I did a concert in Chicago and at the end a little kid came up and asked for my autograph. I thought to myself, "I must have looked like a total jackass, I was probably moving too much." Everyone on stage is minding their own business, (concentrating on) the music, and I was dancing. In that scenario, it made me feel bad, but in Prabir/Goldrush, it's mission accomplished.

Treesa: I've never done anything like this. I fell in love with the symphony when I was 13 and I said, "That's all I want to do, ever." And that was true, until I met Prabir and he asked if I wanted to play some band stuff. And now that I'm in the band, I love it.

Gregg Brooks: The funniest part is that onstage, she's the rock star of the band. She has more fun than anybody playing up there. She has the biggest smile and shreds like an ‘80s guitar player, but on violin.

Mehta: And that is the way it translates. Treesa is like our lead guitar player. She gets all the lead melodies. It's cool, because the ability of these three people to play their instruments is way higher than my abilty to play my instrument. Its great for me to say, let's play this (difficult) song, but I'll play the easy parts. By the end of practice, they have it.

Brooks: This is a no pressure band. It's different for me, having played straight-up rock for my whole drumming career. It's nice to be able to pull out brushes and play all the jazzier stuff I've worked on for so many years. Now I can set up and play with a little more subtlety.

Style: Is this new song going to turn into an album?

Mehta: What was great about this article is that it forced us to record a song.

Brooks: Then, if we have time, it might lead to a second song and to a third song.

Mehta: In my head, I have an album plotted out. We have enough material to do a full-length. It's just a matter of figuring out time and scheduling. Between bands and symphonies, we're booked up for awhile.

Style: When we interviewed The Trillions (a band featuring former members of The Substitutes), they said Prabir writes a song a day. Is this true?

Mehta: I probably demo four or five songs a week and then put them away. At the last practice I came with three new songs. (When I write) it's like, this is what happened this week. It's such a cathartic release, such an asylum from the stupidity that is life. It's a good way to spend time by yourself, doing something that isn't on someone else's agenda. It's a great alternative to shock therapy. When I'm done writing something, I can look back on it in the context of what was happening (at that time in my life). And it's even cooler, because some of those things turn into songs and some of those songs turn into fleshed-out, full-band songs. And some of those turn into recorded songs. That way, one day, when I'm dead I can have a couple of them cremated with me. Maybe I didn't do much, but we'll burn the few things that I did.

Style: Why did you start Ghost of Pop?

Mehta: It started back when I was playing in a band called The Rachel Nevadas and I was friends with a lot of musicians. I'd either go see them play or they'd come see us play and we always joked around about having a Richmond mega-set. Have all of our friends play one set together. It's now become a fun holiday time for all the bands involved. Every year's festival features local bands that I dig. I try to add in new bands every year and have some of the same bands come back. This year, David Shultz and the Skyline and Orioles are coming back, but the rest of the bands are new. My great friend and secret universal genius Jason Horst has put together a project called Rocktopussy, which is all James Bond theme songs.

Style: If you could make the cover of any magazine, which one would you want it to be and why?

Matt: I want just Treesa to be on the cover of Guitar Player magazine.

Mehta: Yeah, because she plays better than all of us and she plays all of the good guitar parts.

Style: Which award should the band be nominated for?

Matt: The Nobel Peace Prize. It'd be great if we could help end tyranny in some third world country or solve the whole debacle in the middle east. Plus, you get a million and a half dollars for winning.

Mehta: I like that idea, because one of our biggest inspirations also aimed for that, which is the band Wyld Stallyns from Bill and Ted's Excellent Adventure. I think they brought peace and tranquility to the universe through their music.

Matt: The air guitar motion would be the symbol for peace.

Prabir/Goldrush will join David Shultz & the Skyline, Orioles, Rocktopussy, The Trillions, Fuzzy Baby, and Yound Adult Fiction at the Ghost of Pop Festival on December 11th at Gallery 5. The doors are at 7pm and cover is $5.