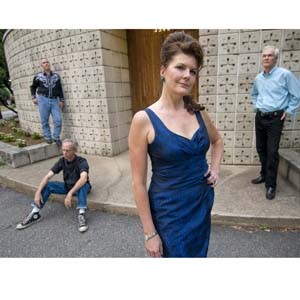 Out of the handful of local acts that carry on the classic country sound, two of them feature the lineup of Cassandra Cossitt, Mike Tighe, David Stover and John Hanor. Their first band together, Buttercup, happened by accident. When Cossitt's sister, Octavia Winfield, caught her singing songs in their living room, Winfield resolved to learn bass so the pair could play music together. After dinner one Easter Sunday, veteran musician Stover sat in with them on a toy drum kit, his first drumming experience. Eventually adding Tighe on pedal steel and Hanor on lead guitar, Buttercup released two CDs before Winfield announced her departure. Renaming itself Loversville, after an obscure Wynn Stewart song, the foursome has updated the era of hillbilly and honky-tonk from which it draws.

Tell us about that one song...

: I don't know the rhyme or reason I came up with this particular chord progression, but the band made it come together. This was probably the truest collaboration that we've ever had. Everybody brought something to it.

Even the drummer brought some things to it. Even if he was just pouring the wine that night, it was an important role.

The lyrics are about a woman who finds herself in a bar at closing time. She may seem like an independent woman, but at that time, she's feeling rather like a damsel in distress. Loversville tries to stay true to country's roots, country before it veered off into awfulness, which probably started happening in the late 60s. That's when country lost its thread. Before that were the golden years, really great stuff. The pedal steel had gotten really big and you'll hear that in (this song). It sounded like real country. We play around with that golden years sound, but we also come from this century.

Does "Independent Woman" represent that?

The independent woman would not have sung this song in the 60s. Loretta (Lynn) may have, but mostly they were staying by their men. This song is a little more about using a man. It's clearly after the women's liberation movement. She has needs.

What do you use him for in that song?

He's gonna help me with my zipper. And there's a bottle in my kitchen I can't open.

You've said that Loversville is a different kind of country than Buttercup. Why?

We cut our teeth with Buttercup. We would learn any country song that we liked. So, we were doing stuff from the 40s and 50s and 60s. We would throw in a Bob Dylan song here and there. We were all over it, just doing what we wanted. We kept it loose. It was meant to be raw, to be really nervous. My sister and I started piling our hair up high and calling each other names on stage and it turned into entertainment beyond just the music itself. Now, it's a little more focused as far as the era we're celebrating.

The sound of country in the 60s was pretty spare. We like that spare sound. We like it pared down, not too full. After that, [country stars] got into studios and started building tracks over tracks over tracks and before you knew it, it didn't sound like country anymore. Then, they were trying to cross over into top forty radio and got into rock and roll and they just lost it. [Our sound] is before that happened.

Your flyers feature iconic images from that era, but they aren't necessarily "country." What's your inspiration?

That's how country-politan was, how that era was. It had country roots, but it was about putting on a girdle and looking nice and having Owen Bradley produce [your record], like Patsy Cline did. The hillbillies were trying to get dressed up. Women were wearing their hair in a certain way. I pick those sorts of visual cues because country was trying to get taken seriously by a larger market. That's why the muscle cars are in there. It was a very American experience, the whole country thing. It's this fun age of audacious America consumerism, which is fun to play with. With Buttercup, we used pulp fiction novel covers. It's a little bit trashier and earlier imagery, more in the 50s.

If you could play with one musical artist, living or dead, who would it be?

I'd play with Ernest Tubb, he had such a great band.

I'd want to play with Johnny Paycheck. He can play bass, he can sing, he can play guitar. And he can party! We do "Apartment #9" (written by Paycheck). A lot of people have done that one, it's a great standard. When we were recording, our engineer George Santamaria, listened while we played it live and he forgot to turn off his machine. He said he got so wrapped up in hearing the story. That's the thing about those country songs, they're very simple and to the bone and they always tell a story. [Also] Buck Owens and the Buckaroos. You know, there was a period in the mid-60s when Johnny Paycheck spent some time with them in Bakersfield, California.

Loversville will perform August 15 at the Commercial Taphouse. The show starts at 9 p.m. and there's no cover.