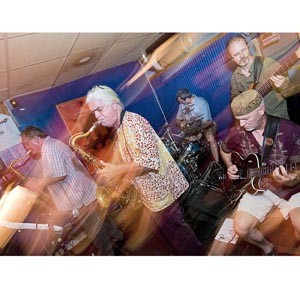 Driven by a desire to play even more difficult music, saxophonist Danny Finney and drummer Robbie Kinter branched off from Ululating Mummies to form Rattlemouth. More than 20 years later, members who now include bassist Marc Langlier, guitarist George Lowe, and newest member Roger Carroll on sax, are still challenging themselves and audiences alike. Rattlemouth's latest record, to be released in the fall, comprises covers of international pieces, including music from Cuba, Venezuela, Zimbabwe, Cameroon, South Africa and Ethiopia.

George Lowe: We don't know the [original] title for this song. It came from a miscellaneous cassette of music from Lebanon. The writing on it is in Arabic and we've never known the name of it.

Robbie Kinter: While we were in another band, the cassette was given to us and we were asked to learn some songs off of it for a wedding. This was the piece that was chosen.

Lowe: It's a traditional piece, essentially a piece of Lebanese folk music.

Lowe: A Lebanese person told us that, in Lebanon, it's akin to hillbilly music. Which I love so much because to me, it's trance music and unbearably hip. The song is amazingly cool. For it to be considered hopelessly square [in its home country], is funny to me. It's a very powerful piece and it has the added bonus of being my wife Christina's all-time favorite piece of music.

Kinter: It's the piece that gets everybody up and dancing when we play it. It's trance music, so everybody will be dancing with their eyes closed. We like ending a concert with it because I've been known to join the dancers while the band is still playing. I'll go out and play along with the audience. I haven't heard the cassette in over 20 years, so we might not even be playing it correctly anymore by this point.

Lowe: It certainly didn't use saxophone or electric guitars. It's a serious permutation, but the melody is probably intact and the spirit is absolutely there. There's a mountain of Lebanese music online and Robbie and I both spent a ton of time pouring through it hoping to stumble on the melody and have not. If anyone knows the name of it, we'd like to know.

Lowe: Let's go with that. It has its own charms. Bet you didn't know you were going to be naming a song today!

How did the current lineup of Rattlemouth come together?

Kinter: Rattlemouth split up for a number of years and Danny and I focused more on the Mummies' stuff. About seven years ago, the Mummies were starting to disband and I got a commission to compose music for a dance concert. So, I decided to get Rattlemouth back together. I asked some of the original members and they said no, but Danny was into it. I worked with Mark at VCU Dance and he's an awesome percussion player along with being an incredible bass player. I asked him to play bass for this gig. Just after the gig, I said,"I want to do this." So, I went to one the biggest Rattlemouth fans I know and asked if he wanted to be in the band, and George said, "Absolutely."

Lowe: Actually, the first thing I said was, "I'm deeply honored, but I don't think I can keep up." Although I wasn't in the band [at the time], I was responsible for their first two records happening. One of my oldest friends is Steve Feigenbaum who runs Cuneiform Records. I knew that he would like them, so I asked him to come down for a weekend and we'd go to a show. We went to Hole In the Wall and he approached them during a break and essentially signed them.

Kinter: We went on to make two CDs, “Fist Full of Iffy” and “Walking a Full Moon Dog,” for his record label. The new quartet has also put out two CDs. The first CD is a collection of all-original tunes by most of us called “Hopabout.” We had started to change direction. We were finding gigs where people wanted us to compose music for something specific. We found that we were recording music for dances and films and animation and promotional videos, all kinds of stuff. Over six years, we had all these commissions and so I took the best of those and added a couple of songs and put out a CD called “Homefed and Full Grown.” It was already kind of paid for, so that was nice.

How would you describe the band's musical direction?

Kinter: George is quite an amazing arranger and he has a huge collection of world music, so he has gone through his world music collection and arranged a whole bunch of stuff for Rattlemouth. So, now we're doing a lot of cover music, but cover music from Ethiopia, a lot of African stuff, and other places.

How has adding Roger Carroll changed the band?

Lowe: Roger is a really brilliant soloist and he's been a featured soloist in jazz and R&B bands for over twenty-five years. He's just a monster player. He's allowed us to expand our palette in a way. This is very much a jazz town. A lot of people really love jazz and when Roger joined us, we instantaneously acquired a jazz flavor. It's expanded our appeal to a lot more people. He's also a great reader, so I can write charts out for him and put them in front of him and he just plays them like he knows them.

Lowe: It was a gig at the University of Richmond where we were in the orchestra pit as the live accompaniment to a program of dances. Two of the pieces we played were African pieces. Roger plays all the time, so I wasn't even going to ask him afterward if he wanted to join us [permanently]. Robbie did and Roger's response was, "Will we play that African stuff?" I said, "Man, I've got a whole book of it." And he said, "Then I'm in." At first, I thought it was just an incredibly great thing for us, because the music just broadened so wonderfully, being able to add one more voice to the arrangements. I thought we were the main beneficiaries, but it's really revitalized Roger as well. He's anxious to play these things he doesn't know. It's rejuvenated him, because he's been playing a niche for so long. We had gotten dormant, we only played four gigs last year. We've played sixteen in the last three months.

How do you choose what songs to interpret?

Lowe: At first, I wanted to just do all of these songs I really loved. It became apparent fairly quickly that not everything is translatable to an American quartet. But, I have literally hundreds of favorite tunes by international artists and some of them cry out to be played and shared with others. If they speak to me on a profound level, when I bring them to the band they usually speak to them in a similar fashion and we play them. The common thread that runs through all of them is a lovely positive and joyful spirit.

For example, I'm obsessed with Ethiopian music and we now play eight Ethiopian tunes. I'm obsessed with music from Zimbabwe and we play a bunch of tunes from Zimbabwe. I love this stuff and I want to do songs that just move me so much. Thomas Mapfumo from Zimbabwe is absolutely my favorite artist and moves me emotionally more than anyone. We recorded one of his pieces for the new record - "Nyama Yekugocha." It's just astounding, that even though he's my favorite artist, I feel like our arrangement and recording are an improvement on the original. Out of all the musical stuff I've been involved with, it's the piece I am most proud of.

Do any guests join you on the new record?

Kinter: We recorded at the best place in Richmond - Minimum Wage with Lance Koehler. But, I've been doing some additonal recording at home and there's a couple of pieces that I've added percussion to. The piece "Wahira" from Cuba has two percussionists from Bio Ritmo, Giustino Riccio and Rei Alvarez, playing on it. For the Venezuelen piece, "Caballo Viejo," Giustino came over this weekend and added kumba and shaker.

What is your favorite thing Rattlemouth has created music for?

Kinter: Working with the University of Richmond dance department. We've gotten to perform live with them in the pit for their dance concerts. It's an incredibly rewarding situation and they've been so nice to us.

Lowe: We've played some very complex and difficult music for them and they've embraced it.

Kinter: It was not easy listening music we played. We've performed for three of their concert programs.

Lowe: They commissioned us to write a piece of music for Robert Battle, a very big deal choreographer from New York who just became the artistic director for Alvin Ailey. In the dance world, Alvin Ailey American Dance Theater is the top and we composed music for their choreographer.

Rattlemouth will perform at CafAc Diem, 600 N. Sheppard St., on Sept. 29 and on the main stage of the First Fridays Art Walk 10th Anniversary Celebration on Oct. 1. Both events are free.