by interviewed my Mike rutz 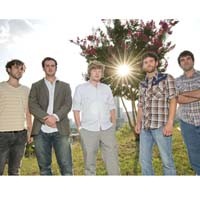 “We got to a point where we thought, why don't we just do three or four large shows in Richmond,” Agee says. “The rest of the time we can focus on other markets.” This summer the band will soak up out-of-town exposure at music festivals including Floyd Fest, Camp Barefoot, Elysian Fields, Buffalo Creek and Ad Astra.

“When we played our CD release at the National in March, nothing compared to stepping out under the lights and hearing all the people cheer,” Hill says. “I was like, ‘Damn, we’ve come a long way from playing double-wides!'”

Style: Tell us about that one song …

Hodges: I wrote “600 Pounds of Sin” when I lived on the Boulevard, a long time before we actually recorded it. It's the first song on our latest album [“Heavy Skies”]. I took the title of the song from “Dire Wolf” by the Grateful Dead. I was trying to write a song where the character felt like he couldn't do enough to keep someone in his life or to get somebody to stay with him. It could represent anybody -- it wasn't necessarily a girlfriend. I thought it was more like a loved one that he lost touch with. He just didn't do what he could have done and it weighs on his conscience. “600 Pounds of Sin” I thought represented that. It's a song that I wanted to be kind of creepy and convey a sense of paranoia. The recording actually starts off with this weird, reverse recording sound. The way the Grateful Dead use it is more of an outward appearance, an actual 600 pounds of this beast, this wolf. And I used it as more of an inner beast.

How does that song represent your evolution as a recording band?

Agee: The biggest difference between this album and the first album is that we were trying to get a lot of different textures. You can hear organ, tack piano, Mellotron and chamberlain  in that song. There are at least five or six different keyboard tracks on top of different guitar tracks. When you open up the cover, you see all of the instrumentation we used.

Agee: It was really cool. They built this barn on a big conservation easement out in the country and we lived up there for two and a half weeks in December. The downstairs is this incredible studio and upstairs is a loft with bunk beds. They had a ping-pong table, a pool table, card tables. Our moms made us food to take up there. We had bonfires. They'd let you do whatever you want.

What would be the band's proudest moment?

Agee: You know, we're not doing this with any record label support. We saved all this money and did two and a half weeks in the studio. Then we went to get the record mastered at Avatar Studios in N.Y.C. with Fred Kevorkian. He's mastered albums for Willie Nelson, Ryan Adams, Phish, Regina Spektor. A-list type musicians. And the Rolling Stones have recorded there. We spent the day getting it mastered and at the end of the day we went to this bar in Manhattan and had drinks. That was one of the biggest accomplishments for us as a band. We had seen it come full circle in six months. So that night in New York, we blew it out. We told every girl we met that night that we were in New York to get our record mastered.

Paciocco: At the same place the Stones recorded!

Agee: Most of them were like “No, you're not!” We were like, “Yeah, we are!” We ended up sleeping on blowup mattresses in our friend's loft, but that was the plan anyway.

What is your most outrageous moment as a band?

Hill: Truthfully, the top five most outrageous things we can't even say.

Agee: So, number six …We played at this house, it may have been the last house party that we played.

Agee: It's a jam-packed house party, something you see out of an '80s movie. People were falling through windows.

Hill: We played one song and four or five guys started jumping up and down and about the fifth time they all came down and the floor just caved. We really brought the house down that night.

Hodges: But the people who lived in the house by that point were like, “Ah, who cares.” So, we kept playing until like 5 in the morning on a broken floor.

Paciocco: My most outrageous moment was when we were playing this house at Hampden-Sydney. We were outside on the deck and there were probably 400 people packed shoulder to shoulder. We were playing and there were people all around us and it was really intense and stressful. Beer was flying everywhere. There was a lot of yelling, people trying to get onstage knocking over equipment. I remember looking up from playing piano and saw the crowd slowly start to part. My girlfriend at the time was locked up with another girl and this crazy girl is pulling her hair. So I stopped playing midsong, jumped off the stage and pulled them apart. They kept playing though, and I got back up onstage and finished the song.

What is it like having four out of five band members living in one house?

Agee: We pile out of the van and it's like single file to the living room. We get along really well, though. It's kind of lame actually. One of us will be gone on vacation or something like that and I'll still call them to see what they're doing. I might not have seen them for a day. The band-house experience -- when you're a young kid playing guitar, it's what you dream about doing.

The day we moved in, we didn't have any furniture or the power on. The first night all we had was beer and candles and a battery-powered boombox. We drew sticks out of a plastic bag to see who got which room. … It's good because we have a little home recording studio set up in the basement so we can work things out.

We have an accordion, harmonicas and other [instruments] lying around. It's like a used music shop. When I'm really hung-over or on a lazy afternoon when somebody's practicing, I'll just pick something up. We have a little screened in porch, so sometimes we'll be sitting out there chillin' and end up playing.

Paciocco: At the same time, we joke around and start these side projects and switch up instruments. We're all at different levels of proficiency on the drums. Playing the drums recently, it's helped me understand somebody else's instrument....But we probably practice just as much on the [side project] music.

Agee: We'll come home from a bar at 2 in the morning and stay down there until 4 playing speed-metal covers. We'll play for hours down there.

Hodges: Silent Death is our speed metal project; it's a four-headed beast!

Farm Vegas returns to the National on Saturday, Aug. 1, along with 11th House, People's Blues and the Shack Band. The show starts at 6:30 p.m. Tickets are $10 in advance.