That One Song: “Match Made in Heaven”

by Jonathan Vassar & the Speckled Bird 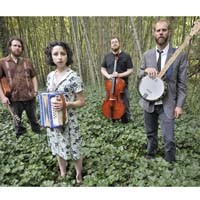 There's an idyllic quality to the life of Jonathan Vassar and Antonia FD Vassar. Nine years after meeting at a backyard bonfire where he was playing songs, Jonathan and Antonia live in a log cabin together, drive to work together and play in a band together.

“We play music a lot,” Antonia says. “We go through old songbooks and he'll play guitar and I'll play accordion.” Although she's a classically trained vocalist and played piano growing up, Antonia only recently learned the accordion and glockenspiel.

“When I started writing with different instruments,” Jonathan explains, “it made it difficult to be a solo performer. I needed someone to play accordion, so I asked Antonia to help me out.” She practiced and within a couple of months had picked it up. For Jonathan's last EP of indie-folk ballads, “The Hours and the Days,” he also recruited friends and Triple Stamp label-mates such as Josh Small, Wil Loyal of Homemade Knives, and David Shultz and the Skyline.

The new record, however, is no one but The Speckled Bird, including multi-instrumentalist Chris Edwards and cello and clarinet player Josh Quarles. “‘The Fire Next Time’ is indicative of our live sound and our live show,” Jonathan says. “We really try to convey the same sort of experience listening to it.

Style: Tell us about that one song …

Jonathan: “Match Made in Heaven” is a song I wrote around the time me and Antonia met. Bryan Hoffa and Jess Hoffa of Broken Hips play on the original recording. Jess is a saw player, so she added in saw during the instrumental part. Antonia, when we were playing it live, started doing this mock saw with her voice. It's become quite a crowd-pleaser. Afterwards people will come up to us and say, “What she does with her voice, it's crazy!” That's the main thing they talk about. Antonia is featured on this recording with the vocal saw.

For the new record, we decided it'd be neat to bring in some of the older songs that people are familiar with. There's a lot of elemental imagery — earth, wind, fire, water. The song fits into the fire aspects, with this relationship burning up. It's about one partner idealizing the other and how that is disastrous. We shouldn't really put them on a pedestal as high as an angel or something that can't be reproached. That's not reality.

That actual song came about because I was writing a list of things I should never write songs about. Or, things I should never have in songs — angels, heaven, you know, all of these clichAc things. And then I was looking at the list and I said, “Well actually, you know what? I'm going to dare myself and try and write songs about all these things and make them good songs.” So that's how it came about. When someone says it sounds clichAcd, we're like, “Thank you!”

Antonia: The song also works as a nice bridge because it's very listenable, but it's also kind of weird. It makes a nice transition between the different kinds of music that are on the album. Which is odd, because it's a really old song, but it works very well as a melder.

What is your first musical memory?

Antonia: My grandmother — hearing her sing cowboy songs around the house, and old Mexican ballads. She always hummed or whistled, which can be annoying for some people, but I do that, too. I didn't come from a very musical family like Jonathan did. His dad is really talented. His dad tried to go to VCU and major in accordion, back when it was RPI in 1960. L. Wayne Batty was in charge of the department then. He was like, “That's not an established instrument. You can't do that.” So Jonathan's dad taught himself how to play piano well enough that he became a piano major.

Jonathan: Other than my father teaching piano lessons, I remember taking car trips with my family. You've seen “Three Amigos,” right? Well, my sister used to call me the singing bush, because I would sing constantly as a little kid. Songs like “My Bonnie Lies over the Ocean” or camp songs or songs I'd make up. It would drive my sister insane. She hated it. She would always scream, “Why won't he be quiet?!” I would go on and on and on, just sway back and forth.

If your music was a classic cartoon character, which one would it be?

Jonathan: We talked about this actually! In the studio, when we were recording yesterday, we decided it would be Bambi's mom. She embodies this pastoral tragedy.

Antonia: Affected by outside forces.

Jonathan: There's a lot of death in our songs, but it's also very pastoral and nurturing and lovely. But really sad at its core.

What is one thing you think would help improve the Richmond music scene?

Jonathan: We are somewhat biased as far as acoustic music goes. We would really love a venue space that's just a quiet venue, one that could really spotlight and highlight awareness of the acoustic-based music scene in Richmond. Which I think is really great. A lot of times acoustic musicians and songwriters get attached onto louder shows, which is fine. But we need to have a really unique venue where the performer would have quiet to perform their songs and the audience would have quiet to listen to the songs, a listening-room type thing.

Antonia: Even just more small to midsize venues. It's really hard to find space to play now with all of the things that have been going on. We've got groups contacting us asking us to set up a show. Four months ago it would have been easy. Now, we just tell them we'll try. [These are] really, really good bands from out of town who people in Richmond would love, and we can't find space for them to play?

Jonathan: The venues that are available are booked full. All of the art galleries and smaller venues can't do anything now because their hands are tied.

What is your most embarrassing moment in the band?

Jonathan: It would probably be a house show we played in Falls Church. We saw there was a house-show series in up Northern Virginia and we thought it was awesome that they have house shows up there. So I contacted the person who runs it and she asked, “So, how'd you hear about me?” I told her I saw the site online and I've got friends in Northern Virginia.

It was probably one of the best shows we ever played. It was in a basement. There were probably 80 people there, totally packed. People were sitting on the floor. Everyone was really nice, really receptive. They were absolutely silent and totally attentive to what we were playing. It was just really weird.

Antonia: They wouldn't even let people in the room during a song. There was no alcohol, but they had hot cocoa. There were a bunch of guys living there and we couldn't figure out how they knew each other. They decorated [the space] — it was a winter party and they had fake snow.

Jonathan: Everyone was super nice and kept asking us, “How'd you hear about this place? How are you here?” They also seemed kind of confused.

Antonia: Finally we asked one of the guys where they were from, how they knew each other. It turns out they were all Mormons. It was a Mormon house show!

Jonathan: Which Antonia, Chris, and Josh all figured out. But, no one told me! Well, until were driving home and I was like, “Man, that was awesome! That was a great show right? But wasn't it kind of weird?” And they said, “Yeah, they were all Mormons.” That was pretty embarrassing.

Antonia: I guess we all thought somebody had told him, but we didn't. And you know, you're really nice, but sometimes you curse on stage.

Jonathan: It was probably good I didn't know, because I probably would have put my foot in my mouth and said something not right. It really was a great show, though. We were all wondering if there's Mormon house shows in Richmond. Is there a circuit? S

Jonathan Vassar and the Speckled Bird performs Sept. 18 at Gallery5, along with Vandaveer, The Low Branches and Paul Watson. Doors are at 7 p.m. and the cost is $6. 644-0005