That One Song: “Cave Dweller” by Hotspit 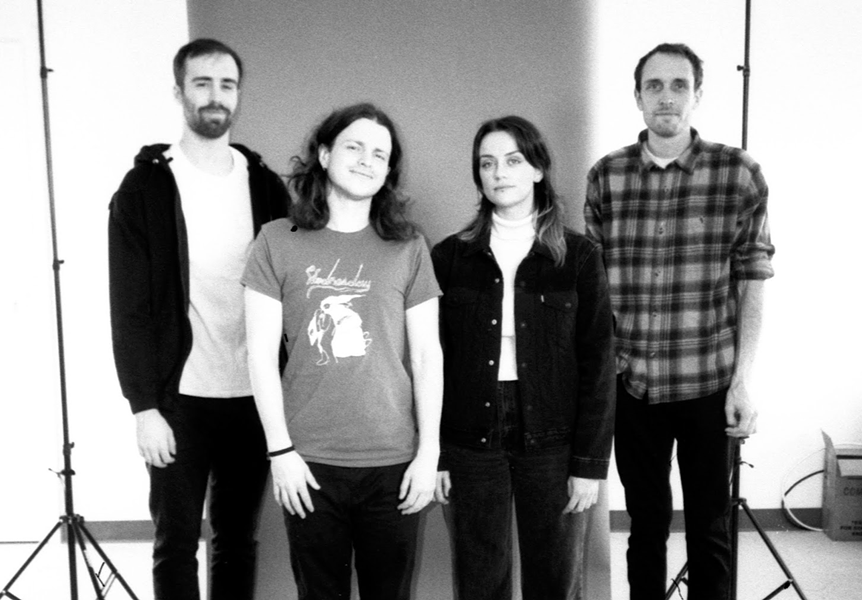 Hotspit has hit an audible turning point. The Richmond-based rock band, known to date for well-honed live sets and studio recordings that successfully capture that in-the-room energy, has successfully branched out on new single “Cave Dweller.”

While the song showcases the group’s established mastery of dynamics and blanketing guitar tones, the quartet set out with the intention of adding more detail this time around, building out the ending with vocal harmonies and strings that reach new levels of beauty and complexity.

The song’s lyrics place singer Avery Fogarty at a whole other turning point. “Cave Dweller” was written pre-pandemic, at a time when Fogarty was struggling with addiction and leaning into a relationship that offered comfort and danger simultaneously. “There was this friendship that was so close and so loving,” Fogarty says, “but we were also hurting each other, and both of us playing into our addictive personalities.”

“Cave Dweller” turns that moment into a crystalline reflection of how far Fogarty has come since, and how far Hotspit, which is planning to release the song on an EP later this year, can take its sound with the benefit of a bigger studio toolkit.

Style: Where did you do the tracking for “Cave Dweller”?

Avery Fogarty: We recorded the base of the song at Drop of Sun, the place [where] we did “Wane Mouth,” out in Asheville, with Alex Farrar. We knew we wanted to add strings to it, so we actually went into the studio, recorded four songs, because we’re about to release an EP towards the end of the year, and then we added the strings later back in Richmond at Bryan Walthall’s house with Jessika Blanks. She’s half of Bedspread Radio.

Who did the string arranging?

It was Jessika, mostly. I had a rough idea of what I wanted it to sound like, and we had a couple practices with her, and she is so fucking talented. She gave us back-to-back, any option we might have needed, and we got to cherry pick. So incredible to work with a musician that was just on, and she knocked it out in the studio. Just layered everything. I don’t think that part would sound as full and as beautiful if we went with anyone else.

What was going on in your life when you wrote “Cave Dweller”?

I feel like so much of my writing style pulls from multiple experiences, or maybe even things that haven’t happened but I can contextualize them. This song is a love letter to a person that aided me when I was in my most addictive state. I’m sober now. I’ve been sober for a little over a year. The ending, that back-and-forth of “It’s you or me,” it felt like, “Maybe one of us will make it out of this.” That’s how it reads to me now. I don’t fully understand, sometimes, what I’m writing about when it’s happening, but looking back is usually the moment where [it] clicks.

Do you enjoy listening back to the songs you write, or do you prefer moving forward?

It’s hard to answer that question, because we’ve been playing so many live shows, and this song has been in the set for a while now… I mean I’m happy with the song. I’m so happy that it exists, and once we’ve recorded it and it’s released, I’m like, “OK, now it’s time to not play it anymore,” which is probably the backwards way of doing things. But it’s like I’ve finally closed the box. I’ve wrapped it up and sent it away and I can be done with it. After it’s recorded and after it’s been released, I can’t listen to it for a couple of months. Then I can probably listen to it and enjoy it again. I’ve been in the process too much — of listening to the mixes and listening to the masters — that I’m not there yet where I can look on top of the mountain and gaze down and be like, “Oh, what a pretty view.” I’m still walking up the mountain.

What are you currently looking forward to?

I’m really excited to finish the EP and have more content out in the world. We have a live session coming out in November. Some friends in the band Laveda helped make it happen. We recorded that over a year ago now, and it’ll be really cool to see how it turned out. Other than that, we’re slowing down our local shows to give ourselves some time to breathe. [We’re] trying to play more in D.C., so we’ve got a D.C. show coming up at the end of October that I’m really excited about. We just did three days — a sort of weekender — with Laveda, and that was really fun. They’re amazing. I think we’re going to focus more on out-of-town shows, maybe doing more and more weekenders or linking up with bands we really respect, and seeing what comes out of releasing this EP and following that.

To hear “Cave Dweller,” visit hotspit.bandcamp.com. Hotspit will perform at Union Market’s Block Party on Saturday, Oct. 22. The event begins at noon and music ends at 11 p.m. For more information, including the full list of performers, visit unionmarketrva.com.