The new U.S. Courthouse is dressed for an architectural party on Broad Street, but the  other guests didn't show. 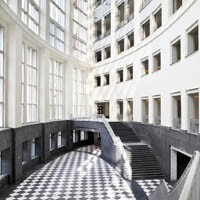 The Spottswood W. Robinson III and Robert R. Merhige Jr. United States Courthouse, looming at the intersection of East Broad and Eighth streets, was dedicated in October. But it doesn't behave the way Robert A. M. Stern Architects, a New York firm, probably envisioned it would.

The 346,000-square-foot behemoth, which occupies an entire downtown block, was designed to merge politely with existing buildings along this stretch, particularly with its immediate Broad Street neighbors. To the east was the gloriously classical Eighth Street state office building. To the west, across Seventh Street, an elaborate symphony hall (part of the performing arts center) was planned. But the early-20th-century office building was demolished (a tragedy) and the new music hall (not a hot idea in the first place) wasn't built.

Stern had designed a site-sensitive courthouse with these structures serving as contributing guideposts for its placement on the site, as well as for scale and style. With the dematerialization of these would-be anchors, vacant lots now flank the new courthouse. The $102 million structure looks like a beached whale.

While the building's vocabulary is classical (the Stern firm's calling card), there are enough radical twists and turns — in the unexpected curved forms of the building — that it comes off as damn peculiar if you look at it too long. These elements, of course, would have been softened considerably if the surrounding structures were in place.

But they aren't. So what do we have here?

The seven-story building, clad in granite and sandstone, is anchored at Broad and Eighth streets with an entrance that respects the 90-degree street corner. But then, as the building extends westward along Broad, the masonry core sweeps inward to form a concave quarter-circle. Countering this depression is a huge, bow-front pavilion formed mostly of glass. It teasingly promises an exciting atrium inside.

Moving down Eighth Street, to the left of the front entrance, the building forms a convex arc that swings around to align with Grace Street. The building's seven floors are most easily read from this side of the structure. The top three floors of this curve contain the judicial offices and thus the reason for the unusual footprint of the building. With no corner offices, each of the judges gets an equally picturesque view of two mid 19th-century landmark churches (St. Peter's Catholic and St. Paul's Episcopal) in the immediate foreground, and the Jefferson-designed Capitol beyond.

This eastern faAade gets blasted with morning light and a series of louvered aluminum extensions overhead were meant to offer some shade and additional, much-needed detailing. The opposite Seventh Street faAade is dominated by the glass-enclosed atrium.

In other words, the building looks different from almost every vantage point. What doesn't change, however, is the overall restraint the architect maintained in the choice of materials and extent of decoration.

At street level, the building covering is a dark gray stone that creates a solid podium for the upper six stories. The latter are covered in a sandy-hued

veneer. The application of aluminum mullions and clear windows is gracefully balanced. Considering the building's unexpected form, the understated detailing makes this a chaste, almost conservative building. But if anything, the detailing is a little thin. The stone on the ground level, for instance, might have been more heavily rusticated and larger blocks employed.

That the building hangs together as well as it does, considering all that's going on — with twists and turns seldom employed in classical buildings — speaks well for the savvy of its architect.

Of course, when approaching a governmental building of any substance, one is quickly reminded that this is the early-21st-century age of fear. Yes, a lineup of steel bollards is anchored to the sidewalk along the curb: No chance of ramming the building with unfriendly vehicles. Approaching the front door after passing through two of four wide-pier columns, two huge, flanking windows with darkly tinted glass are foreboding. Guards and cameras surely keep vigil on the other side.

Inside, the stone-paved vestibule, adorned with a large seal of the United States, is severe and ominous in that Batman kind of way.

Visitors turn immediately to the right and face a phalanx of metal detectors. Pass through these, however, and you arrive at the glorious, six-story atrium. The eye immediately travels up. Looking toward the inside of the building, a series of monochromatic balconies are stacked one atop another. The bowed, glass wall overlooks Broad Street and the rear of CenterStage.

While I scanned the elegant space, a chatty security guard came up behind me and volunteered, “Welcome to the Embassy Suites.” Well, I hadn't thought of it, but there was a bit of the interior hotel atrium thing happening here. Wasn't it architect John Portman who in the 1970s pioneered the now much-copied concept in Atlanta?

With no prodding, the guard continued: “Everybody hates this building — it's so cold.”

The public spaces are severe — but I found them refreshingly so. It is possible to see some of the Italian Renaissance in the building — the white walls and the black and white polished stone floors recall Andrea Palladio's Church of the Redentore in Venice or perhaps a simplified version of Francesco Borromeo's little chapel, San Carlo alle Quattro Fontane, in Rome.

The truth is, we're probably too used to meaningless ornament. Stern allowed none of that. The architect knew where to stop.
Hopefully it will be kept severe — no portraits, sculpture or plants.

This sophisticated simplicity would have contrasted nicely with the warmer, exuberant faAade of the now-demolished Eighth Street office building (inspired by Michelangelo's Farnese Palace in Rome). Alas. And the jazzy faAade proposed for the concert hall, complete with embedded statuary, would have enlivened the views from the atrium. As is, the courthouse sits in isolated splendor, awaiting the future resolution of what neighboring buildings will emerge.  S