Three people who help run local homeless shelters share their stories and what it’s like for the homeless during the holidays. 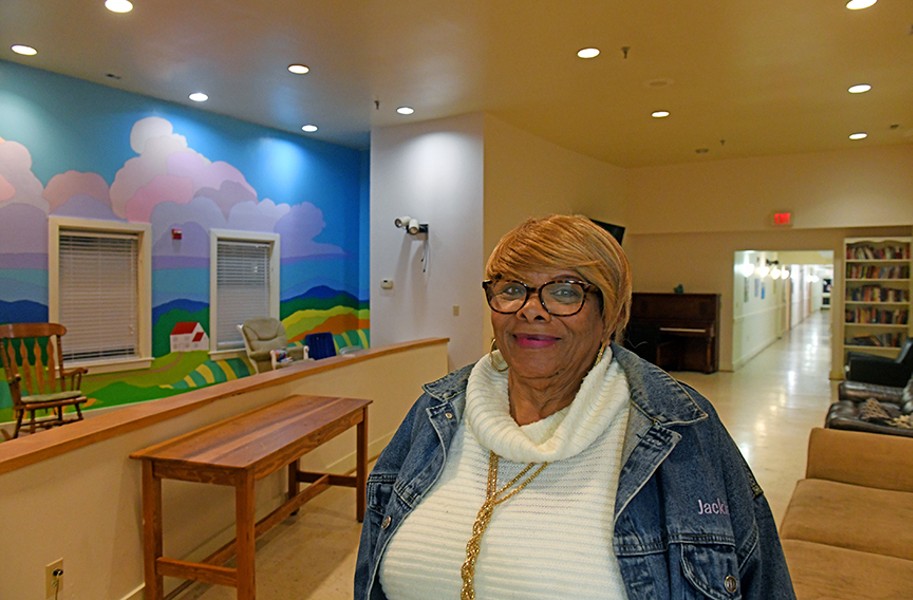 A part-time job and some supplementary income. That’s all it was, at first.

But now, 10 years after a friend recommended she apply, Jackie Webster doesn’t call being an overnight house manager a job. It’s become her calling.

“It gave me a sense of purpose,” she says. “It’s something I love doing that fulfills me ... once you retire, your kids are gone, you don’t see your grandchildren as often, you kind of get a void in your life. Housing Families First fills that void for me.”

Housing Families First focuses on helping families who are homeless achieve housing stability. Webster’s role is making sure residents are OK throughout her 5 p.m. to 5 a.m. shift and includes greeting residents and restocking toiletries. Making sure they’re comfortable is a priority, she says, adding that it’s easy for people to be overwhelmed in the situation.

One of the nonprofit’s largest obstacles is getting real estate agents to take a risk on someone who has poor rental or credit history.

“I think [Realtors] look at them as a substandard person. That they don’t deserve the same things that everybody else deserves,” she says. “But they do. They deserve a decent place to live and an affordable place to live.”

The Catch-22 is that decent places to live aren’t affordable and affordable places aren’t decent, she says. But what keeps her going is seeing the success stories and hearing residents come back and say, “It works,” and “We’re still doing OK.”

Just this week, Webster had a resident who recently gave birth return and gush about how she’s now able to cook Thanksgiving dinner in her own home. Another young woman who came in with her baby six years ago, dropped by to let them know that if it wasn’t for Housing Families First, she doesn’t know where she’d be today.

When Webster first got there, residents — at the time only women and children — stayed longer. With the upcoming holidays, she’s reminded of her favorite moments.

“Some of my most fond memories was preparing the Christmas dinner, helping them wrap gifts and making it as homelike as possible,” Webster says. “The same thing you would do at home.”

Due to safety reasons, some of those traditions have been halted. But she says not to worry. There will still be a Christmas tree, some caroling and holiday decorations.

Regarding what the community can do to help, she says: “If someone wanted to donate time to be there with the families, incorporate their Christmas traditions into some of theirs … or maybe a night you bring in stuff and kids do presents for the parents … the kids are in trying times too.”

The shelter continuously needs donations since each room is restocked when a family leaves after four or five days. Anything a family would need to take care of themselves — linens, washcloths, soap, deodorant and laundry detergent — is what Webster says they need in the shelters.

She jokes that when she leaves, they’ll have to carry her out the door.

“We’re more than just a shelter. … We do care,” she says, lingering briefly on the “care.” “I’m doing what God has created me to do.”

Wayne Meredith splits his life into two halves: before and after the fog cleared.
In the before stage, he used to see people walking down the street, doing everyday things, and wonder, “How the hell can they do that? Don’t they know that Joe Schmo down the street has crack for sale?”

Meredith had been homeless for nearly 10 years, staying on friends’ couches and sleeping in abandoned cars. In his early years, drugs, trouble and the wrong people frequently found him.

“I called my probation officer, [who] I hadn’t seen in three, four months and just said ‘Come and get me. … I’m not doing this no more,’” Meredith says. “I was going to do it in a jail cell. I had a plan. I didn’t care anymore.”

But instead of sending a police car to take him to jail, she came to him and asked two questions: “Are you tired? Are you finished?” Then she suggested a 30-day program at the Healing Place, which monitors sobriety while residents come off drug addictions.

“That is the problem with a lot of addicts. We seriously do not want to get high, but we can’t figure out how to do it,” he says. “There’s a deep-rooted problem that we’re fighting and not trying to see. We’re using the drugs to cover it up.”

Part of the program includes walking 2.5 miles each way to the center. Now on his walks, Meredith would see former addicts walk with self-respect. He’d never seen that before. The fog began to clear.

The old debate came up in class on whether addiction is a choice or a disease. The class was split and Meredith was pissed. He wanted answers. Which one is it?

“The person who was teaching the class changed everything for me,” he says. “He said, ‘You got to think back and figure out what it is to you, because it doesn’t matter to any of us. … We don’t know your life. We haven’t lived and walked in your shoes.”

Meredith stayed in the program’s one-year option. He later got a job, went back to school to become a substance abuse counselor and applied for a part-time position at Caritas, which helps Richmonders break the cycle of homelessness and addiction. He’s now worked there for 10 years. He celebrated his 11th year of sobriety Sept. 13.

“Oh man, I got the best job on the planet,” he says giddily. “You have no idea that feeling you get when you have found a job that you don’t have to force yourself off the bed every morning to go to work.”

Residents are surprised when they hear his story, he says, and it excites him to see them shift from “I can’t do it” to “how did you do it?” The stories he’s encountered run the spectrum. Some people are passing through, some are drug addicts and some just made a wrong move.
One man’s wife had cancer and he spent all of his money trying to help her.

“There’s a misconception that people in a homeless shelter are just moping around and are a depressed, sad crowd. It’s not like that,” he says. “So holidays when they come around, it’s just as chipper and happy as every other place.”

With the support of the community and local churches, the holidays at Caritas include gifts for the men, cookouts and other special events.

But Meredith likes to keep it simple: working and eating good food.

In some ways, Janice Graham is a firefighter.

Her day job consists of putting out flames that affect a person’s housing and well-being. It’s just being done in a social worker setting and without the bulky clothing.

As a family case manager at the Salvation Army, she helps mothers process the fact that they’re homeless and provides support, which can include figuring out how to get birth certificates, Social Security cards and finding housing.

“Housing in Richmond,” she says, pausing while deciding if she should fully say it’s terrible. “It’s few and far between for low-income families. … A lot of them make below minimum wage.”

With income-based housing, Graham says it’s either all taken up or the waiting list is long. So yes, she concludes, the housing market right now is horrible.

“A lot of them have young teenage girls that they don’t want to put into public housing,” she says. “They’re scared that something’s going to happen to their kids.”

Frequently, the families who come to Graham have nothing. Some have babies but no diapers — or kids but no coats for the winter. Others haven’t been taught the basics of savings or budgeting and have fallen behind on just one bill.

It’s not just the cost of rent, she says, noting that someone may be able to afford $700 a month but not the bills that accompany it, such as for electricity and food. But Graham always makes sure people know one thing before walking into her office: Do not come in with your head down.

“You lift your head up. You’re still a human being, you’re just going through something right now,” she tells them. “And all it takes is just that one person just to tell them that they mean something.”

Although she’s been at the Salvation Army for nine months, Graham’s spent her life working in group homes, foster care, the school system and hospitals with children who have cancer. As someone who’s experienced loss and grief, she hoped that she could aid somebody else.

“Just knowing that there were people and kids that needed somebody to be there to listen to them, to understand the things they were going through and just saying, ‘Hey, I feel like I can help,’” she says.

Graham says that’s a big thing for people: having compassion. She reminds herself that at any moment, it could be her on the other side of the table.

This is her first year of holidays at Salvation Army, known for its Angel Tree program and giving out flyers that indicate where families can have dinner together on Thanksgiving.

Christmas, on the other hand, is crazy and chaotic, she says.

“Fingers crossed that everybody gets housed at Christmas. That’s our prayers,” she says. “That everybody can celebrate in their own space.”

Back to the Holiday Almanac