Mangum & Company will make you want to shout. 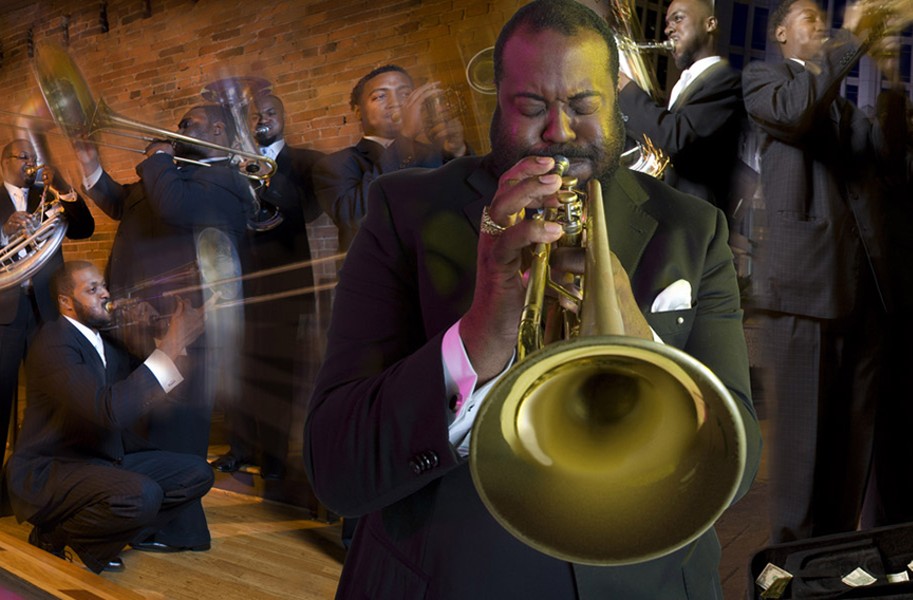 Cedric Mangum says he was born with the gift of music.

“My siblings held me up to play the keys before I could walk,” he says from his home in Charlotte, North Carolina.

He leads Mangum & Company, a powerhouse shout band that represents United House of Prayer for All People congregations across the region. “Our music? It’s a testimony,” he says.

Shout bands are gospel-based trombone choirs rooted in a sacred musical tradition started in 1919 by spiritual leader and first bishop of the United House of Prayer, Marcelino Manuel da Graça, aka Daddy Grace.

Inspired by Psalm 150:3-6, which emphasizes instrumental praise, shout groups are akin to New Orleans Dixieland bands with a smidge more soul.  Brassy blares punctuated by call and response peak with ecstatic crescendos were originally intended to keep folks up and enthused during 24-hourchurch services.

While the tradition was founded in Massachusetts, it was the South that truly embraced it, especially in Charlotte where Daddy Grace preached at a tent revival back in 1926. “Southerners really grasp gospel music, the gospel period,” Mangum says.

His first musical memories are from his mother’s church, where at age six he played snare in its shout band. At just 13, he graduated to lead trombonist and bandleader. “It’s a huge honor. It means a lot. You have to be spiritually minded and filled with God’s spirit so he can lead you in the service,” he says.

The congregation believed in him, and Mangum says being musically inclined from an early age got him the respect he needed from others to lead.

Today his band is about 15 strong and composed mostly of brass instruments, a tambourine or two, and a cymbal to keep time. Unlike some shout bands, there are no drums.

“I want the people to hear the music, versus it getting lost behind the thumping,” Mangum says. He promises Mangum & Company will bless you up.

“It feeds the heart and the soul. When you hear it, you can’t stand still.”