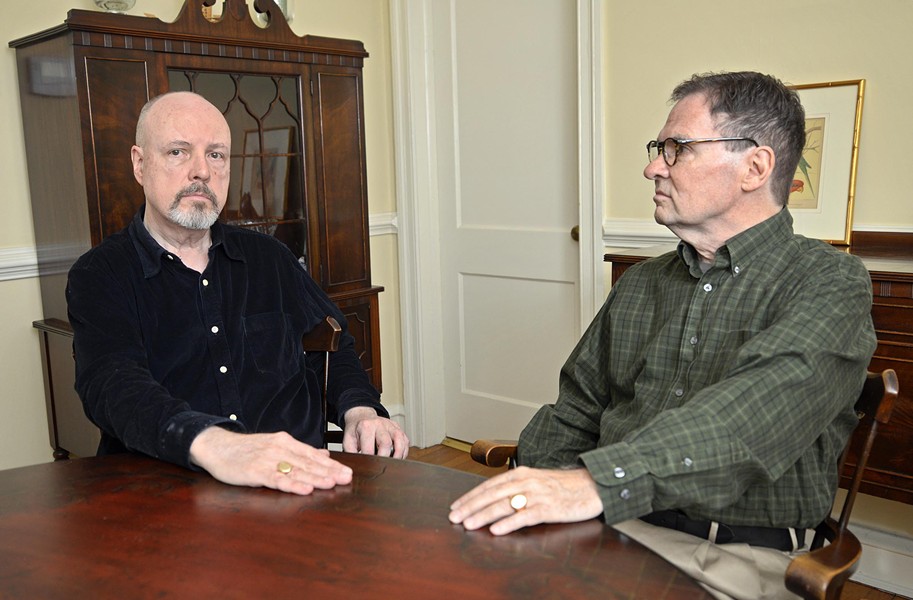 Ash Daniel John Murphy was fired from his new job as executive director of St. Francis Home days after he named his spouse, Jerry Carter, as his insurance beneficiary.

John Murphy was on a conference call in April when he got a strange message.

A veteran manager of nonprofit groups, the 63-year-old was busy settling into his new job as executive director at St. Francis Home, an assisted living facility affiliated with the Roman Catholic Diocese of Richmond.

“You’ll be getting a visit,” he was told. And moments later, a man and woman dressed in business attire were standing in the doorway.

They got right to the point: “We understand that you are in a same-sex marriage,” he recalls them saying. “That is antithetical to the church’s teachings and renders you unfit for the position.”

“I was stunned,” Murphy says. “I didn’t know whether to be angry or cry.”

Murphy is a lifelong Catholic who was legally married to a man in Connecticut in 2008. He says that when he applied for the $75,000-a-year job, there was no mention of any restrictions. When he filled out his benefits forms, he thought nothing of listing his spouse, Jerry Carter, as the beneficiary.

Murphy’s situation illustrates a new intersection of faith and gay rights. While the Catholic Church opposes same-sex marriage, it must confront a series of legal shifts that could make it impossible to refuse employment to homosexuals.

On June 26, the U.S. Supreme Court upheld the right to be in a same-sex marriage. And on July 15, the federal Equal Employment Opportunity Commission decided that denying employment because of sexual orientation or a same-sex marriage constitutes discrimination.

The diocese did not respond to a list of questions from Style about the matter, and a spokeswoman says she can’t answer questions about Murphy because it is a personnel matter.

In the Catholic Church, conservative bishops in the United States and elsewhere are pushing back against Pope Francis’ efforts to make the church more modern and compassionate by being more accepting of Catholics who are divorced or gay. How soft that line is drawn can be influenced from the top.

The leader of the Catholic Diocese of Richmond is Bishop Francis X. DiLorenzo, who has a reputation of strictly enforcing the more conservative tenets of Catholic teaching. Traditional Catholics applaud his support of their values.

But on the Murphy case, the timing seems against him. “He’s gone down a slippery slope on this,” says one priest, speaking with Style on condition of anonymity.

The incident at St. Francis Home touched off a firestorm. Murphy says that the matter of homosexuality didn’t come up when he was being interviewed for the job. When he told a board member about it after he accepted the position, he says she replied that it was no problem because it was a sectarian position.

After DiLorenzo sent two officials from the diocese to fire him, Murphy’s lawyer says, three members of the board resigned, apparently in protest.

According to several accounts, DiLorenzo has a long history of acting as an enforcer of strict doctrine, something that he denies through a spokeswoman.

DiLorenzo was ordained in his hometown of Philadelphia in 1968 and served as auxiliary bishop in Scranton. He was sent to Hawaii and in 1994 replaced the ailing bishop of Honolulu.

There, he drew praise for helping the homeless and for his zero-tolerance policy on sexual abuse of children by priests. But his agenda, by some accounts, was to steer the diocese away from the more liberal activities of his predecessor, who was tolerant of homosexuals, notably gay priests.

He fired clergy and added new ones to stiffen teaching of the church’s views on abortion and gay people. A columnist for the Honolulu Star-Bulletin wrote in October 2002 that according to gay rights advocates, when DiLorenzo became bishop, the church no longer was tolerant of gay priests, prompting many to leave the islands. “That’s when the purge began,” a local lawyer told the newspaper.

In 2004, DiLorenzo was transferred to Richmond, where he replaced Bishop Walter Sullivan, considered an unusually progressive church leader who protested nuclear weapons at Navy bases and took a more “pastoral” stance on sexual issues, as one priest says, including the treatment of gays.

But DiLorenzo was intent upon turning the diocese back to strict Catholic teaching. He dismissed a woman on a panel to explore making women priests and dissolved a diocesan commission on sexual minorities that served as a gay outreach group.

In response to questions about this from Style, Diocesan spokeswoman Diana Sims Snider offers a statement:

“Bishop DiLorenzo was not told why he was assigned to the dioceses of Honolulu or Richmond, but he said the suggestion that he was sent to fulfill an agenda is certainly not true. In both dioceses, his actions reflect his desire to best serve and shepherd the people of the local Catholic Church.”

Sullivan drew mixed reviews among Catholics in the diocese, Ashland-based author Phyllis Theroux writes in a 2013 biography of Sullivan, “The Good Bishop.”

In one anecdote, an unmarried teacher at a Catholic high school in Virginia Beach became pregnant. The administration wanted to fire her as policy called for. They went to see Sullivan, who said, as Theroux wrote: “You will do no such thing. Do you want her to have an abortion because she has lost her job and can’t afford to have the baby?”

With that logic, Sullivan turned the matter around and the woman kept her job and the baby.

Murphy and his partner say money is tight because he hasn’t found a job yet. He filed a complaint against the diocese with the EEOC in September for discriminating against him based on sex. The diocese has not yet filed a response.

Pope Francis has the authority to change the church’s stances on gays and gay marriage. While advising that gays be treated with “respect and compassion,” he’s been unclear about how far he’s willing to go. The pope is expected to come up with new guidance on family issues within a few months. S