The Richmond Performing Arts Alliance celebrates a decade while still working on a promise to the local arts community. 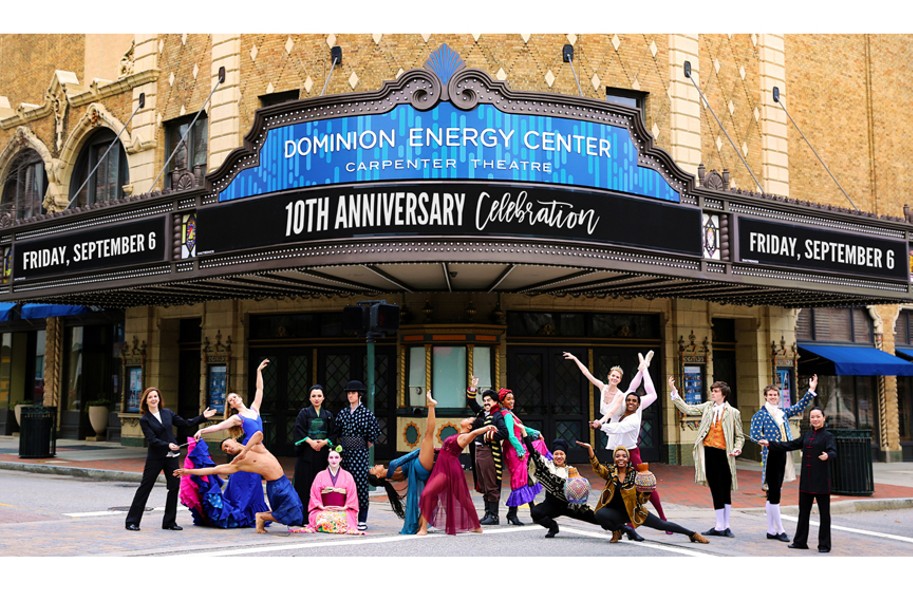 It's been 10 years since the Dominion Energy Center for the Performing Arts opened.

Originally called Richmond CenterStage, the $73.5-million renovation of the Carpenter Theatre was planned to showcase local performing arts organizations. A lot has changed since the grand opening in 2009. Beside the name change, new layers of corporate overhead have been added, and the center has endured tax problems and criticism.

It has also grown significantly. "We had about 57,000 people visit the Carpenter Theatre in 2009. Last year, we had over 117,000 patrons at our ticketed events alone," says Abbi Haggerty, executive director of the Richmond Performing Arts Alliance, the nonprofit behind educational programming and fundraising for the center. Those patrons came mostly for local performers — 76% of all building activity is attributed to the resident companies, and generated more than $332,000 in local taxes.

It's holding a 10th anniversary celebration Friday, Sept. 6. The main event is a collaborative performance from nine of the resident companies, mixing diverse styles, artistic disciplines and cultural influences.

Although there's been a lot of growth, the center has maintained a sense of continuity. Haggerty, who worked for the center during its grand opening in 2009, says this celebration will echo both the grand opening and the five-year-celebration, adding, "It's not the type of thing you can see anywhere else."

Guests can purchase tickets to the main event or to the gala, an expanded event with performances by the resident companies and others before and after the show. Haggerty assures it won't be stuffy.

"People like it, it's not a black-tie affair," she says, laughing. Instead, think "moveable feast," spread between the three smaller venues of the center: Rhythm Hall, the Libby S. Gottwald Playhouse and Genworth BrightLights.

"It's really something for everyone," she says, describing performances as varied as a "Henry V" preview by Quill Theatre and a dance by Elegba Folklore Society honoring Sorsornet, a spirit of the Manding people of West Africa.

On Saturday, it will kick off the Genworth Lights Up! Youth Series. What was once a single day of workshops has returned in an expanded format, introducing youth and families to the performing arts in five free events. Saturday will highlight theater arts, but future sessions will cover digital arts, dance, technical theater work, and vocal and instrumental music.

The Richmond Performing Arts Alliance acts as an umbrella group supporting other organizations, but it also organizes shows, too. This year will include a return of the Legends on Grace series, which sold out in 2018. The lineup increases from three shows to four, starting with a tribute to Motown starring Desirée Roots on Oct. 5, Scott Wichmann's RVA Rat Pack on Dec. 7, Susan Greenbaum's renditions of Burt Bacharach on Feb. 8, and Debra Wagoner's celebration of Judy Garland and Liza Minnelli on May 9.

Ever since City Council approved the transfer of the Carpenter Theatre, critics have voiced objections. Complaints have been as varied as renovation costs and the opaque corporate overhead added when the for-profit Richmond Performing Arts Center was established to make use of historic tax credits. Chief among those complaints, though, is that the venue doesn't provide enough to the city, and that venue rental fees are too expensive for local performers.

To the first point, the alliance notes its expansive educational programs and ever-growing attendance. Tax watchdogs describe it, and new proposals like the Navy Hill project, as expensive boondoggles that siphon away tax dollars from schools.

Even some arts supporters are critical, although from a different angle.

"They promised us a world-class arts venue, and how many events do they produce?" says arts writer and former Style arts and culture editor Don Harrison. "They're averaging four a month."

He notes that show bookings are outsourced to a third party and compares the current state to the theater under Joel Katz in the late '90s, adding, "He took no public funding at all, it made a profit and it brought more acts here each month. We've gone backwards."

But some resident companies say access has never been better.

"It's really helped out the smaller companies," says Brett Bonda, managing director of the Richmond Ballet and chairman of the Resident Company Association. "The goal is to offer competitive rates, even better than at similar venues. A thriving arts community is better for all of us, and we're committed to it." It hasn't always been easy, but Bonda says they've gotten better at sharing the space over the years, and work well together.

"The rates aren't higher here," says Ricks, who has worked in theater in New York and Washington. He says the economics of putting on performances are a huge challenge, but the rent isn't the make-or-break factor. "Live performance isn't that popular in America," he says, noting that government funding for the arts is more robust in Europe or his native Canada. "They invest in culture, in art" and the audiences follow, he says.

Ana King, the founder and artistic director of the Latin Ballet, says her company owes a lot to the center. She started the ballet 20 years ago, "just with some friends," she says. She began her partnership with the center when it first opened, and says it's transformed the Latin Ballet.

"Now, I have 250 students, and 18 of them have become apprentices. We have professional performers from all over the world, and we are seeing more and more people coming to the shows from everywhere."

Bonda, who was a dancer with the Richmond Ballet in 1985, says the trajectory has been going up since he came here.

"We're growing. Restaurants are opening, things are happening. We're glad we made the decision to remain in the city," he says, instead of moving the ballet out to the counties for cheaper rents and parking lots. "It's just a very different city today, it's incredible. It's a destination, and people love coming here."