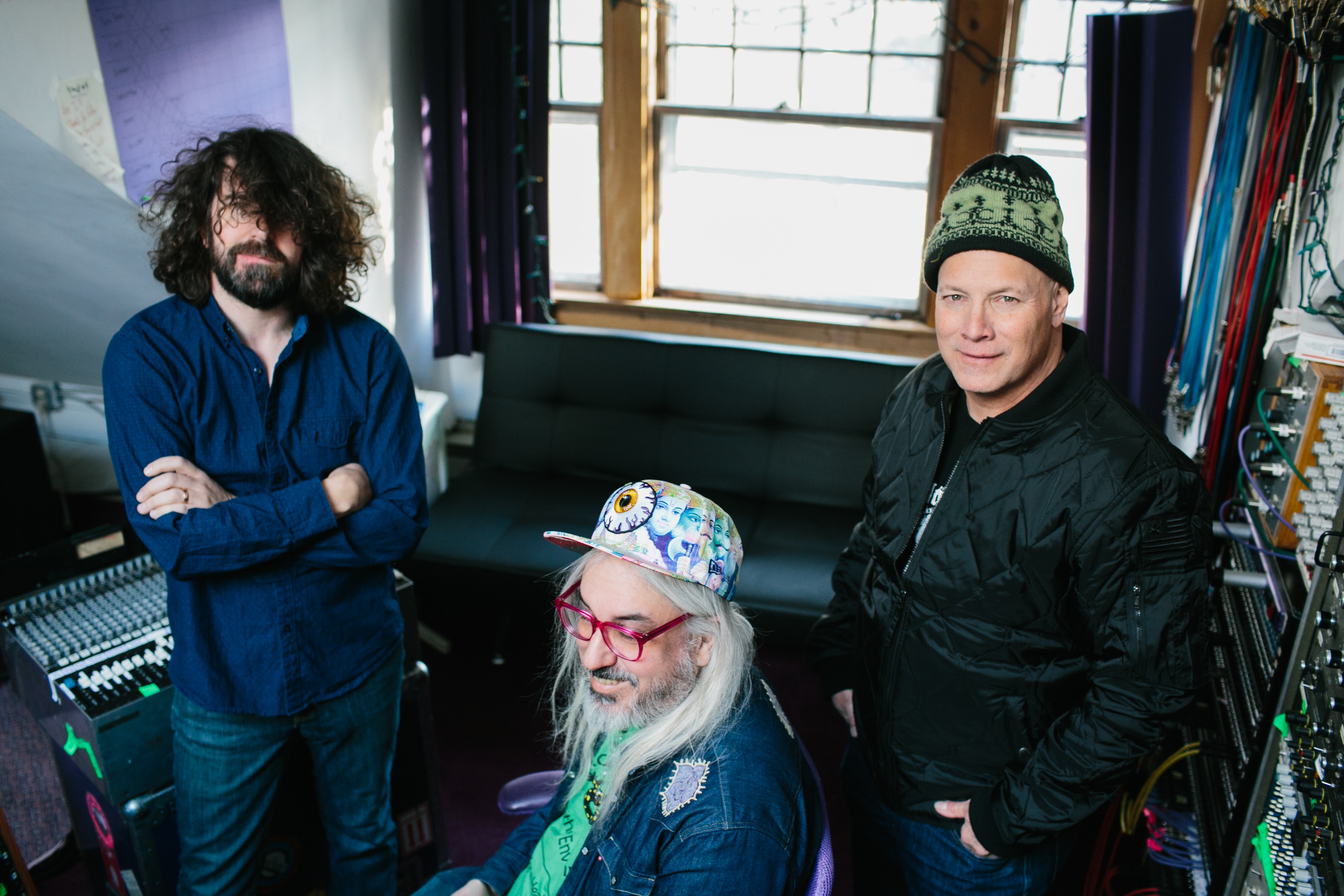 The son of an African Studies professor at Smith College, Murph met guitarist J. Mascis and bassist Lou Barlow in Amherst, Mass. in the early ‘80s, while they were still in high school. Soon their band was rebelling against its hippie surroundings with a reign of brutally high volume shows while forging a signature style, a mix of hook-filled ‘70s rock twang with hardcore punk flourishes, or "ear-bleedin' country."

An influential group, Dinosaur Jr. has always had a reputation for being dysfunctional offstage, often barely talking to each other. Barlow was kicked out and Murph left the group after it signed a major label deal in the early '90s while Mascis, its principal songwriter, kept touring with other players and releasing solo work.

In 2006 the original trio reunited and has since released four reenergized albums of new material that have (oddly) received better reviews than their early work. The group is finishing the tour cycle for its 2016 album Give A Glimpse of What Yer Not and will be returning to the National on Sunday, Oct. 8 with Detroit monsters Easy Action opening.

Style called Murph recently for a brief chat and nobody answered. He called back a few minutes later.

Murph: Sorry I totally spaced the interview. I was in a store and looked at the number I didn't recognize and thought you were a solicitor.

Style Weekly: No problem. I am a solicitor in a way. I’m just kind of relieved I’m not talking to J again. I interviewed him 20 years ago and it was rough. Lots of one-word answers and sighing. Finally I just asked him to put [Mike] Watt on the phone. Then things got better.

Murph: Twenty years ago, J was not a nice person. He’s really mellowed out. It was even hard for us, even for me to just hang out and talk to him. If you had hit him with crazy gear questions and amp stuff, then you probably wouldn’t have been able to shut him up.

So how are you guys getting along now that it’s 11 years into this reunion?

Oh, it’s been great. It’s amazing after knowing these guys for 30 years that it’s still changing. We’re literally still getting more comfortable with each other every tour we go out. It’s weird. With Dino there’s still always like this weird tension, but we’re so used to it now. It’s an interesting dynamic.

Didn’t you just perform “You’re Living All Over Me” on the Amherst Commons?

Oh, that was a practice gig for Riot Fest in Chicago. Our buddy, this guy that owns a local record store puts on a show every year and people were like, “oh if you’re gonna practice why don’t you do it here?” So we ran through it. It was cool. We hadn’t performed on the Amherst Commons in like 30 years. I was really nervous so I played the songs three times as fast. All these guys I knew from high school showed up. Six of my closest stoner buddies were there. It was totally surreal.

I’ve seen Dino a number of times since the late ‘80s – probably lost a good deal of hearing at those old Boathouse shows. It always seems like J’s vocals start the show out kinda muddy or buried in the mix. Or am I imagining that?

No, its just his stage volume is so insanely high. It takes our sound guy a song or two to try to dial it in. It bleeds through my drum mics, the vocal mics. The sound guy has to separate that. And it’s really hard to dial that in at soundcheck because the sound completely changes when people come in, whether festival or gig.

It’s frustrating sometimes having a loud stage volume, you have to compete with guitar and trying to get the drums and vocals in the mix. Most bands have a moderate stage volume and let the PA and sound guy do their job. But like with us, the heavy stage volume, you don’t have a lot of options. Lot of times I’ll talk to Noel [Ford, sound engineer], and he won’t even put the guitars in the PA, they’re so loud. He’ll literally just be mixing drums and vocals, that’s all that’s being mic’ed through the PA.

You’re the guy keeping time, how does each member of Dino approach that aspect?

Well J is a drummer first, rather than a guitarist. So he’s got a really exact kind of sense of time. I was just noticing Lou has impeccable time, he’s not a music guy or gear guy, but is intuitive like me. I think we’re all tuned in, Lou and I are a lot more enmeshed. J sometimes I think is listening to the time in his head, rather than us, which can be weird. But it works. We’re all perfectionists. We can hear if something is off, we’re super dialed into it.

Did you know Grant Hart from back in the day?

I probably met him, but didn’t know him personally. J and Lou saw like the first show Husker Du show ever did in Easthampton or Northhampton. I remember they were blown away. Huge buzz. We were in high school. I bought the first single. We were like, “who are these guys?” We know Bob Mould more recently, because we’ve done a lot of festivals and shows. But no, I was bummed when I heard about Grant Hart – I was kind of surprised more people weren’t talking about it among our friends. Everybody was just kinda like, “oh yeah.”

I saw where you guys were having a contest to pick a setlist online. Will you be doing some lesser played songs like “Whatever’s Cool With Me” or stuff off Green Mind?

Yeah our manager put that out there and people totally responded. I don’t know about “Whatever’s Cool With Me,” I used a double bass pedal so I’d have to pick one of those up again. But we’re working on “Blowing It” and another Lou song off the [new] record. It should be interesting. We’re definitely going to change it up a bit. We feel the need to reinvent it and not play the same old stuff.

On Green Mind I only played on three songs. J was really starting to come into his own and kind of get into that songwriter thing. Probably when you interviewed him, around the Fog stuff, too. He became such a perfectionist and wanted to do everything himself. He wasn’t very tolerant, he wanted to get stuff done and just ended up doing it.

Toward the end that’s when my departure happened. I started to see things were changing. He was wanting to become a different kind of singer/songwriter, get different musicians, better musicians and experiment more. By the end of ‘93 it was evolving and changing.

Seems like the early Dino stuff was darker – then somewhere along the line these new records switched from mostly minor chord progressions and became, I don’t know, happier for lack of a better word.

Oh yeah, definitely. With J it’s all part of his life. He met his wife and that was starting up. Dinosaur Jr has always been dark, it’s not like happy, hang out with your buddies and jam. All of us sometimes feel like we need fresh air. I understood when I left. It’s hard to do that with the same people you went through all the struggles with.

I’m trying to remember if you guys ever put out a live album.

Well we put out “Chocomel Daze,” this Dutch thing that was really early stuff. And we did that live video, “Live at the Middle East,” which is really good. J’s brother-in-law, he’s German and he’s a film guy. He does a lot of videos and experimental stuff. He’s been working for years archiving. We’re supposed to have a real behind-the-music documentary thing coming out. Every year, he’s like “yeah, I’m really close, it might happen this year.” So who knows? Maybe this is the year.

That's cool that Easy Action’s opening too, right? How did that come about?

Yeah! They’re doing the whole tour. They’re older than us, and just hard hitting, man. It’s the guy from Negative Approach who were a huge influence for J and Lou. It’s a great combination because they just go out and pummel you. Really supercharged.

Last question: What’s the one thing on tour that you can’t do without?

Um, flip-flops. Lot of times we’re showering in grungy clubs and we’re on the bus. I remember I was in Germany in this sports arena, and I showered and picked up the most gnarly athlete’s foot. So ever since then, I’ll freak out if I lose my flip-flops. I’m like, [yells] “I gotta get my flip flops!!” [laughs]