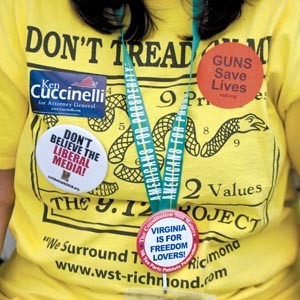 The Know-Nothing Party of the 1850s fought against Catholic immigration. Strom Thurmond's Dixiecrats pushed for states rights and opposed civil rights for African-Americans in the 1948 presidential election. And a groundswell of Republican activism arrived with Barry Goldwater in the early 1960s.

Conservative grass-roots movements are nothing new.

“The tea party is a wholly expected phenomenon,” says Rick Shenkman, editor of George Mason University's History News Network and author of “Just How Stupid Are We? Facing the Truth About the American Voter.”

The truth, and the tea party, came tumbling into Richmond with this weekend's Virginia Tea Party Patriots extravaganza at the Greater Richmond Convention Center, attracting a diverse set of people — mostly white, but young and old, local and from far away, capturing a slew of groups shilling for reform.

There's also a table for the Media Research Center, with swag declaring “Don't Believe the Liberal Media!” and a report titled “TV's Tea Party Travesty: How ABC, CBS and NBC Have Dismissed and Disparaged the Tea Party Movement.”

He has T-shirts styled like red, white and blue football jerseys and touting the names of Palin, Huckabee and Romney, all for $20. But his bestselling shirt on Friday morning is “Anyone But Obama,” which he and his 20-year-old colleague, also from Nashville, are wearing.

“We actually drove overnight, didn't sleep at all,” says Bannister, tanned and all-Americanish with a well-mannered, Southern twang. “We heard tea party so we came running.”

He sees the tea party as an opportunity to take ownership.

When asked what he thinks about Sarah Palin, the top-selling T-shirt name on AmericanTees.com as indicated by a nearby bar chart, Bannister hesitates before declaring: “I'm supportive in what she's doing. … I respect her rigor and I respect her passion.” Bannister doesn't necessarily think she has enough experience for some things, but stands behind Palin's mission of empowering women: “Everybody benefits from that.”

At a nearby table, Bishop E.W. Jackson is taking a breather following his Friday morning keynote address. A Chesapeake-based pastor who's something of a state tea party superstar — he's also African-American, which tea party organizers like to point out — is founder of a group called Staying True to America's National Destiny. Jackson says he's supported the tea party movement “from the very beginning” and approaches it from a Christian perspective: “The Bible condemns debt,” Jackson says. “It says the borrower is servant to the lender.”

He also believes marriage is between a man and a woman, abortion is wrong and “human beings are not created with equality of ability.”

“I think people are born equal in the sense that God loves us all,” Jackson says. “You're equal in dignity and you're equal in worth and value, but let the marketplace decide” who ends up with the material goods, he says. “This is a Biblical view.”

Outside the main exhibit hall, near the table for the American Council for Immigration Reform (“A Pro-Immigrant Policy of Low Immigration”), Chris Cassone, a salt-and-pepper-haired man in jeans, a denim jacket and gray and silver sneakers strums an acoustic guitar and sings a song, “City on the Hill.”

“There's no brighter light to shine when your freedom's on the line,” Cassone croons. An older, be-stickered gentleman snaps photos of Cassone and drops a crisp $10 bill into his open guitar case.

“If you hang out I'll sign it for you,” Cassone says.

Cassone, 60, has driven down from New York, “about an hour north of Ground Zero,” and is selling his disc titled “Memorial Day,” for $15: “I'm lowering the price just to move them,” he says. He's performed at about 50 tea party events nationwide and is a contributor to “Tea Are the World,” an album featuring “all-conservative” artists, he says, and benefits America's Mighty Warriors, a group for families of fallen soldiers.

“City on the Hill is my new song that I'm playing for Glenn Beck next week,” Cassone says.  S