Tell Us a Tale

Henley Street and Richmond Shakespeare team up for “The Winter's Tale.” 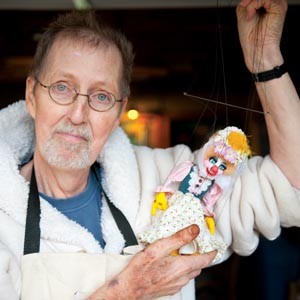 Long ago before electricity, people told each other stories for their nighttime entertainment. The longer the night, the longer the story, making wintertime tales the longest and most elaborate.

In William Shakespeare's effort to create the consummate winter's tale (note the title, “The Winter's Tale”), a bear of a play emerges, offering a challenge for even the most veteran theater companies. Fortunately for Richmond audiences, two theatrical heavyweights, Henley Street Theatre Company (lauded newcomer) and Richmond Shakespeare (tested veteran), have joined forces to produce the tale this holiday season. In a first-time collaboration, they offer up a sophisticated holiday entertainment option.

The play is, as many of Shakespeare's later works, multitiered and full-bodied. The story transitions from a serious tragedy in the first three acts to a light romantic comedy in the last two, encompassing elements of both genres. Grant Mudge, Richmond Shakespeare's artistic director, says that the play “is a warming tale told around the fire to stave off the winter and the hunger. Call it a fairy tale or tall tale that has everything.”

Then there's the issue of the bear. In Act 3, Scene 3, lies one of Shakespeare most famously intriguing stage directions: “Exit, pursued by a bear.” It's at this point the mood of the play shifts from drama to romance and therefore opens an otherwise forthright statement to interpretation by individual directors. “Very often people tend to shy away from depicting the bear onstage, as they feel it's hokey or just too unrealistic,” says James Ricks, artistic director of Henley Street Theatre Company and stage director of “The Winter's Tale.” “Sometimes it's just too expensive. So the trend has become to create a light and sound effect that demonstrates the fact that someone is being chased and eaten by a bear. Some productions have even used a projection. I felt very strongly about honoring the stage direction simply because it is such an amusing and provocative one: ‘Exit, pursued by a bear.' It conjures all kinds of images in your head when you just say it. It would be a shame to turn our backs on it and just come up with something that doesn't show you a bear … especially in a play that possesses such fairy-tale qualities.”

In order to honor the direction, master puppeteer Terry Snyder has been called in to build a bear puppet. “It's sort of like a variation on Big Bird,” says Snyder, a Richmond resident and 35-year veteran of puppet making. He's designed and built puppets for shows such as “The Jungle Book” and currently, Theatre IV's production of “The Velveteen Rabbit.” Snyder has traversed the globe performing while remaining a partner in the company, Applause Unlimited with Christopher Hudert. His resumAc includes such honors as the president's award from the Puppeteers of America and citations of excellence in the art of puppetry from the Union Internationale de la Marionette, and he earned a grant from the Jim Henson Foundation for his show, “Voyage to Lillyput.”

“This puppet is unique because it is not only an extension of the actor's art but also a representation of the symbol of the bear,” Snyder explains. “We are not doing a literal bear suit. … It is a kinetic bear sculpture.  It's not just Yogi.”

“In a legend or myth or tale you need a monster,” Grant Mudge says. “There is a bear. You need a tremendous adventure, and there is a shipwreck. What else do you need for a great tale? A love story. Shakespeare has two very intense and beautiful love stories. Finally, you need magic.”

“The Winter's Tale” runs Dec. 2-23, with a show on the 31st, at Richmond CenterStage. Tickets are available by calling the Henley Street Box Office at 340-0115. View information at HenleyStreetTheatre.org or RichmondShakespeare.com.