TV Review: HBO's "True Detective" is the best new show of the season. 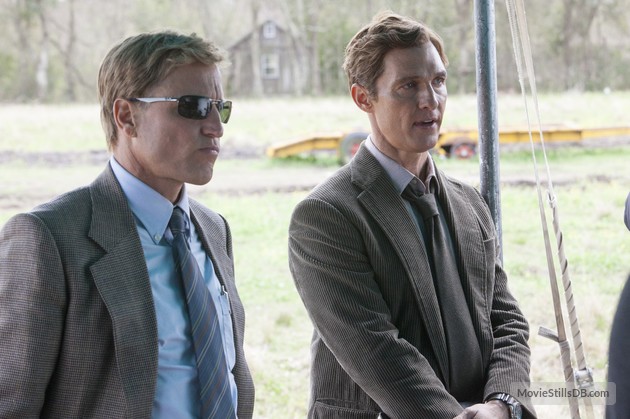 Actor Matthew McConaughey is having a hell of a year.

In “True Detective,” McConaughey plays a tightly wound detective named Rustin “Rust” Cohle partnered in Southern Louisiana with Woody Harrelson as good ‘ole boy detective Martin Hart. The two are investigating the ritualistic 1995 murder of a young woman but the plot unfolds slowly through a series of seamless flashbacks from both men as they separately recount the story for investigators that have reopened the case in 2012. Apparently, the former partners have had a falling out.

The series is written entirely by novelist Nic Pizzolatto, author of “Galveston,” who’s a former University of North Carolina professor clearly playing with our expectations in this well-traveled genre. Not having the usual cadre of Ivy League writers means this auteur project feels more solidified in its brooding tone and existential musings -- even if the dialogue does border on sophomoric cheese from time to time.

Pizzolatto, who got his very recent television start writing episodes of AMC’s “The Killing,” uses the murder case as a jump-off point to explore the more twisted personal relationship between the two detectives, always emphasizing character over mystery. And the show looks good too. Cinematographer Adam Arkapaw and director Cary Fukunaga (“Jane Eyre”) do a nice job capturing the languid Southern atmosphere with an almost Lynchian ability to convey dread, though not as surreal. There's graphic sex, Harrelson has a buxom mistress on the side -- but not a lot of graphic violence, at least not yet. In a nice touch, the opening credits song “Far From Any Road” comes from the dark, gothic country duo the Handsome Family of Chicago.

This is really about the acting though. And the performances are first rate, with McConaughey clearly in a zone playing one of the few leading men in any series that is also a philosophizing atheist. As his older self, back off the wagon, he is especially memorable, almost an otherworldy presence as he messes with the detectives' minds while smoking cigs and pounding beers. Typical dialogue between the quarreling Harrelson and McConaughey goes like this exchange, which occurs while they are watching a revivalist tent sermon in episode three:

McConaughey [describing preacher]: “Transference of fear and self-loathing to an authoritarian vessel is catharsis. He absorbs their dread with his narrative. Because of this, he’s effective in proportion to the amount of certainty he can project. Certain linguistic anthropologists think that religion is a language virus that rewrites pathways in the brain, dulls critical thinking.

Harrelson [annoyed]: “Well I don’t use ten dollar words as much as you, but for a guy who sees no point in existence you sure fret about it a lot. And you still sound panicked.”

McConaughey: “At least I’m not racing to a red light.”

Critical response and viewership has been strong so far -- expect fans to become even more bonkers as it progresses. The quirky darkness of the show is inspiring the same kind of binge viewing that “Breaking Bad” did.

This season consists of eight episodes and Pizzolatto, who left academia only two years ago, has already inked a deal with the network for two more seasons. Unfortunately, the two big movie stars reportedly will not be back. However, the follow-up season will keep the detective buddy format and should draw plenty interest if ratings continue.

“There could be a season that’s much more of a widespread conspiracy thriller, a season that’s a small town murder mystery, a season where nobody is murdered and it’s a master criminal versus a rogue detective or something,” Pizzolatto told Deadline Hollywood. “Even the title, ‘True Detective’ is meant to be, of course, purposefully somewhat generic.”

Whatever the case, this compelling work is the kind of generic that’s not bad at all. I suspect we may see a lot more talented novelists leaving the preening land of academia looking for gold in dem dar hills of Hollywood. Apparently the way to sell a film these days is to turn it into a comic book first. Maybe to sell an HBO series, you may just have to write a book.