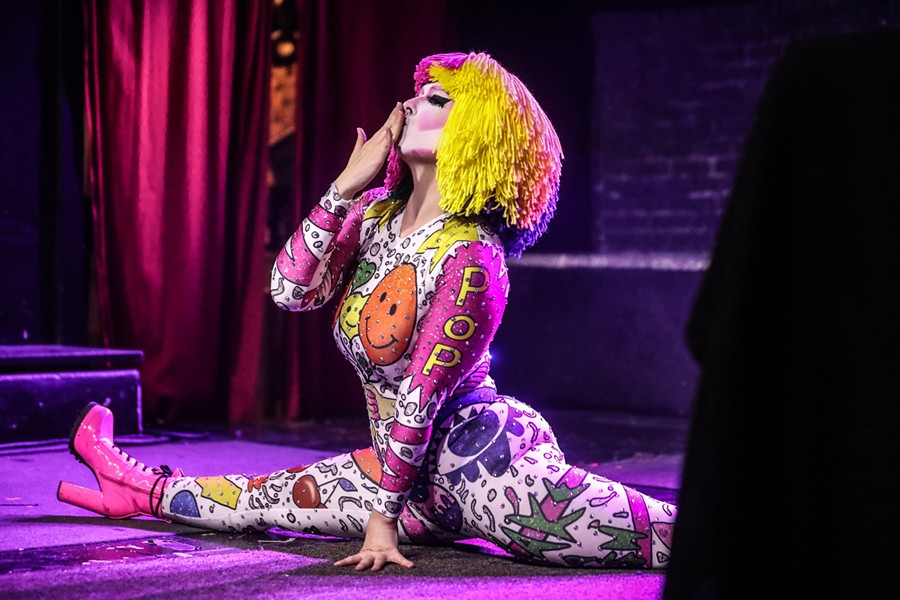 "With nearly 38,000 followers on Instagram and over 46,000 followers on TikTok, Sweet Pickles is far and away Richmond’s most famous queen." Her second show launches May 10th at Fuzzy Cactus.

When Claire Gates began going out to drag bars in college, she always left the shows wishing she had been born a boy. With her background in theater, she knew the eccentric performances and lip syncs would be no problem for an entertainer like her, but the notion that girls didn’t do drag held her back.

It wasn’t until she began discovering scores of other cisgender women and people assigned female at birth (AFAB) donning drag on social media that she decided she had enough of sitting on the sidelines at shows. She was ready to take centerstage as the drag queen Sweet Pickles.

As with many other AFAB performers, Gates knew she needed to make her drag unique or risk not achieving the same level of illusion her male peers display in wigs and heels. “I didn’t want to present as a woman or even a human being,” says Sweet Pickles. “I wanted to look like a walking art project. So I eventually fell upon making my wigs out of unconventional materials. Yarn is inexpensive, especially if you have a rewards card.”

From gift wrap ribbons to yarn and rubber toys, Gates has proven her prowess at creating wigs out of crafting aisle clearance items for almost four years. Her weird, whimsical style featuring explosions of color and a multitude of silhouettes might best be described as a technicolor troll doll.

“I like to tell people, ‘Think of your favorite doll you had when you were a child. Well she grew up to be a whore,’” says Sweet Pickles. “I’m your favorite cartoon that came to life and took a bunch of molly [MDMA].”

Gates credits the delightful wackiness of early 2000s children’s entertainment as the inspiration for the Sweet Pickles style. Her drag name, however, actually derives from a 1980s kids book series about adorable animals who get themselves into silly situations, or “pickles,” and learn a lesson.

Growing up, Gates’ father would give her and her sister nicknames and alter egos to act out. When she was on the hunt for a drag name, one of those monikers stuck with her: Sweet Pickles. Only later did she learn about the book series that inspired her father’s pet name for her.

Knowingly or not, Sweet Pickles’ success often builds upon the memories of our culture's collective unconscious.

“I perform to a lot of throwbacks and songs I would be listening to on my iPod Nano on the middle school bus ride home,” Gates says. “I love to tap into that nostalgia and that part of people’s brains where they store all the things they love but haven’t thought about in a while -- and then add on a twist.”

Many of Sweet Pickles’ top looks raid the cultural cache of millennial and Gen Z childhoods to deliver top-notch drag. Characters ranging from the slug secretary Roz in “Monsters, Inc.” to Cynthia, the nearly bald doll in “Rugrats,” are liable to appear in a performance. Gates once dressed up as Darla, the brat from “Finding Nemo,” and performed to a suite of shake-themed songs with a clownfish doll submerged in a plastic fish bag from Petsmart. During a rendition as Sid from “Toy Story,” she nearly burned her apartment down while torching Buzz Lightyear with a can of hairspray and a lighter.

Such iconic performances turned Sweet Pickles into something of an online sensation. Unable to perform in-person during the dark days of the pandemic, Gates turned to the internet to continue honing her craft. With nearly 38,000 followers on Instagram and over 46,000 followers on TikTok, Sweet Pickles is far and away Richmond’s most famous queen. Despite her high follower counts, neither platform really pays the bills. As is the case with most drag queens, Sweet Pickles’s in-person performances are what makes her the most money.

The third Monday of every month you can find Sweet Pickles leading her own show, “Out of the Jar,” at Fallout. With a theme that Gates describes as “whatever drag that makes you happy,” performances can vary from Layla Monroe’s eight minute long System of a Down destruction of the dancefloor to Chicki Parm doing pull-ups from the rafters to Dua Lipa.

Sweet Pickles’ second show launches next month at Fuzzy Cactus on May 10th. The name of the show came about thanks to an autocorrect error by Northside’s own Grace Wetpants when the title of her monthly show — “What If The Theme Was Sluts?” — accidentally became “What If The Theme Was Slits?” Although the entire cast is now non-binary except for Sweet Pickles, next month’s premier will be Richmond’s first all AFAB drag show. If audience turnout is good, the show may become a regular series.

As one of the city’s few full-time drag queens, Sweet Pickles lives off of the financial support of her many fans. Though cash or tips via Venmo are preferred, her fans have been known to toss yarn at her mid-number as a show of support.

“It takes many a bundle to make my wigs,” explains Gates. “So if you bring me yarn you’re going to have to bring me a couple of them. Don’t be coming to my shows and throwing me a beige or gray bundle of yarn either. Give me those fun Sweet Pickles colors.”